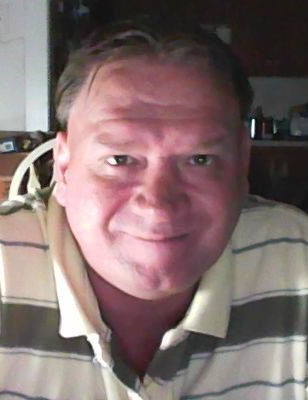 Terri Alan Swafford, 53, of Sturgeon Bay died peacefully in the comfort of his home, with his family at his side.

He was born in Richmond, Missouri, the son of Raymond Mark Swafford and Rosemary June (Skiles) Swafford. Terri and his siblings were raised by their aunt, Earleene “Sug” Swafford. Terri grew up Baptist and attended Richmond R-XVI High School. He was initially employed at a frozen-food dinner-processing company. Terri didn’t have any formal employment after that due to his disability.

He moved to Sturgeon Bay about 10 years ago and was a resident at Bayview Terrace Apartments. Terri’s brother, Christopher (and his wife, Sylvia) moved to Sturgeon Bay several years later to care for Terri. Terri also became close with his local caregivers from Advocates In-Home Care and enjoyed fishing and bowling with them. He also enjoyed playing dice and card games. Terri loved watching movies. Of the hundreds he had watched, he loved watching his favorites at least five or six times.

He was preceded in death by his parents; nephew, Joseph Swafford; uncle, Lowell C. Swafford; other relatives; and his dog, Pete.

No services have been planned at this time. Terri’s family may have a memorial service at a later date.

“Our family would like to thank the staffs of Advocates In-Home Care and Unity Hospice for the compassionate care given to Terri.”

Huehns Funeral Home and Door County Crematory in Sturgeon Bay are assisting the Swafford family. Expressions of sympathy, memories and photos of Terri can be shared through his tribute page at huehnsfuneralhome.com.