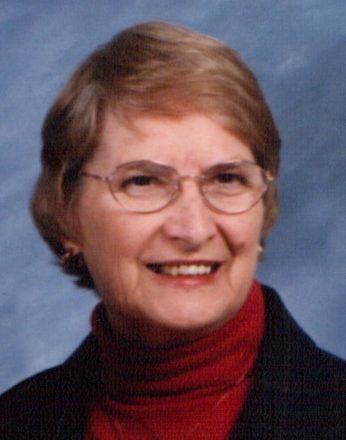 Theresa was employed with Milwaukee Shoe Factory (later Santa Rosa Shoe Co.) in Sturgeon Bay. She worked in the office at Lost Acre Realty and then as a payroll clerk for Southern Door Schools.

Theresa was a member of the Catholic Daughters of America and served as State Regent. She was active in Parents Involved in Education (PIE) while her children were in school. She and Norman supported their children (as well as other students) in all of their academic, athletic, and extracurricular activities. Theresa taught 4-H classes in Maplewood. She was a wonderful seamstress and enjoyed knitting. Theresa’s baked beans, fresh baked bread, and apple pie were family favorites. She was also an avid reader. Theresa was a devoted Green Bay Packer fan. She was proud of her Belgian and Irish heritage.

A Mass of Christian Burial will be held at 11:00 a.m. on Monday, August 6, 2018 at St. Joseph Catholic Church in Sturgeon Bay with Fr. Robert Stegmann as celebrant. Theresa will be laid to rest in St. Joseph Cemetery, beside her husband, Norman.

Memorials may be given in Theresa’s name to the Alzheimer’s Association.

“Our family would like to express our heartfelt thanks to the staffs of Cardinal Ridge CBRF and Sturgeon Bay Health Services (formerly Golden Living Center-Dorchester) for the wonderful care given to our mother.”

Expressions of sympathy, memories, and photos of Theresa may be shared with her family through her tribute page at www.huehnsfuneralhome.com.