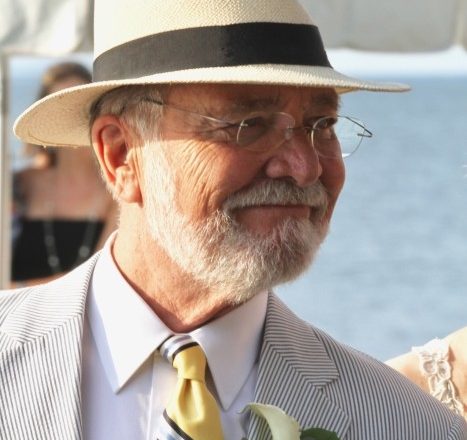 Tom sauntered through life with a wise and graceful presence. He loved big ideas, good writing, and deep conversation over cups of coffee with family and friends. He was a great listener and teacher of life’s deeper truths, freely sharing his wisdom with all who sought it. Tom was a visionary, and those who knew him were often transformed by his sage guidance. He was full of phrases and adages to take on life’s journey. Some of his favorites were, “All you need to know is the next right step,” and “Trust that all you need will be given.”

A gifted writer who amassed an impressive collection of poetry over the years, Tom always had a blue Flair felt-tipped pen in his pocket, ready to jot down a new thought or awakening on a nearby napkin or scrap of paper. He had the gift of capturing the essence of people’s lives in poems he wrote for them as they married, lived, and passed on. His words became dear to his legions of friends and those he mentored. His children and grandchildren have learned to live by these words, and they have deepened and changed who they have become. He was working on a book about the history and adventures of his spiritual path at the time of his death. “He was a profound man,” said Dick Egan, one of his closest friends in Door County, Wisconsin.

He was born the second of six children to John Bush and Louise Bambenek Torinus in De Pere, Wisconsin on November 21, 1938. The family moved with their father to several U.S. Army bases during WWII and returned to De Pere at the war’s end.

Tom attended St. Norbert’s High School, graduating as the class valedictorian in 1956. He then left Wisconsin for Dartmouth College where he majored in economics and was a member of Phi Beta Kappa, graduating in 1960. He was an aggressive and graceful skier who became a member of the Dartmouth ski team.

After college he won a job as assistant to the general manager of the New York Daily News, at that time the largest paper in circulation in the United States.

He returned to Wisconsin to work for Post Corporation where he held a number of news assignments: reporter, editorial page writer and editor, news director and general manager of Channel 11 in Green Bay. Known for his innovative and gutsy news approach, he took the station from last to first in the marketplace.

While in Green Bay, Torinus married Mary Glenn Sharp, also of Green Bay. They shared a love and a spirituality that deepened over 55 years. He loved unconditionally and with rare acceptance. Many found a safe haven in his presence, an ease that didn’t exist anywhere else.

Torinus and his two brothers bought the Menominee Herald-Leader in Menominee, Michigan in 1976, and he served as its president and editor for six years. The newspaper won numerous journalism awards and launched the careers of many young journalists who went on to distinguished work in the field.

After the Menominee Publishing Company was sold in 1982, Tom embarked on a spiritual path that originated in childhood. He and Mary moved to Chicago, Illinois and he studied theology and spirituality at Loyola University, McCormick Theological Seminary, and the Institute for Spiritual Leadership. After earning two master’s degrees, one in theology and one in pastoral counseling, he and Mary moved to Door County, where he served as a spiritual director, guiding and transforming the lives of individuals, groups, and community builders.

In addition to his teaching, counseling, and journalistic writing, he left behind a legacy of improvements in Wisconsin. As an example, as Channel 11 news director, he and his station sued the Green Bay Packers to make their financial records available to the public. The irony was that his father was secretary-treasurer of the corporation at the time. The Packers yielded, and the team has been exemplary in corporate governance ever since.

He and Channel 11 also launched “Operation Stench” to attack air pollution in the Green Bay area. They brought suit against the biggest air polluters in the region and were successful over time in pushing those organizations to install air emission systems that lowered pollution levels.

Tom was instrumental in helping his brother, John, accomplish a leveraged buyout of Serigraph Inc., a West Bend, Wisconsin manufacturer of graphic components. He helped to write a business plan to raise capital and served on its board of directors for 20 years.

While in Menominee, he teamed with Tom Kuber, a prominent entrepreneur, to help redevelop the downtown and marina and to reinvent the city’s economy. In recent years in Door County, he served in a leadership role for the Door County Community Foundation.

Tom was a lover of soul, and it made him a magical father and grandfather. When he moved to Menominee, Michigan, he purchased an old and quirky house on the Menominee River. The river provided a source of peace and mischievous adventure. In the summer, the neighborhood children would gather to sway over the river from the rope swing he designed and take daring plunges off a raft he constructed. In the winter, he shoveled “curvaceous curvies,” mazes on the ice.

Throughout his life, he would frequently use a phrase of his own grandfather, D.C. Bambenek, “The sky’s the limit.” He was famous for his Big Daddy Pancakes, and he would always talk you into three scoops of ice cream on your cone. His boundless joy of life culminated in another phrase he repeated again and again in his last days, “My cup runneth over.”

He is survived by his two daughters, Alexandra Torinus of Wauwatosa and Elizabeth Torinus (Dan Fredman) of Hartland; his two grandchildren, William and Scarlett Horner of Hartland; brothers, John Torinus, Jr. (Caroline) of West Bend and Charles Torinus (Nancy) of Carbondale, Colorado; his sisters, Laurel Culp (Peter) of Bradenton, Florida and Nancy Neuman (Bill) of Portland, Oregon; two sisters-in-law, Maryclaire Torinus of Brookfield and Shirley Sharp of Atlanta, Georgia; and 16 nieces and nephews.

He was preceded in death by his parents and his brother, Mark.

A memorial service and gathering will be held as soon as COVID-19 allows, hopefully this summer in Door County.

Huehns Funeral Home, Inc. & Door County Crematory LLC of Sturgeon Bay are assisting the Torinus family. Expressions of sympathy, memories, and photos of Tom may be shared with his family through his tribute page at www.huehnsfuneralhome.com.