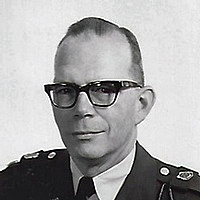 Thomas William Pritchett, 96, of Sister Bay, died peacefully on the morning of Jan. 7, 2018 in Scandia Village with family and friends near him.

He was born Nov 25, 1921, in Buchanan, Michigan. At the age of 13 he accepted the Lord as his Savior. He grew up in Racine, Wisconsin where he was drafted in September 1942 after serving in the Civilian Conservation Corps planting trees in northern Wisconsin and Minnesota. He was proud to be a military veteran of WWII, Korea and Vietnam. In 1942 Tom met the love of his life, Donabelle Mae Nelson of Sister Bay, on a blind date in Milwaukee. Tom and Dona were married in July 1943 in Georgia while Tom was in Army Training. He and wife, Dona, celebrated their 74th wedding anniversary in July of 2017 a month before she peacefully passed away at Scandia Village.

He served in the Army Air Corp during World War II until he was discharged in October 1945. While attending the University of Minnesota he took advanced ROTC and was commissioned a 2nd Lieutenant in the Army Reserves on 5 June 1950 just in time to be recalled into the Army as a new officer and was shipped to Korea. Completing his Korean tour, he took his family to Japan from 1953 to 1955, when he was offered the opportunity to serve in the military until he retired.

After serving two tours in Germany during the Cold War and a tour in Vietnam, he retired in 1968 as a Lt. Colonel. He and Dona with their four children then retired in Chicago where Tom first worked for Campbell’s Soup Company and then as an administrator at Gottlieb Memorial Hospital in the Chicago suburbs, during the evenings he completed his Masters in Business Administration from Roosevelt University. In 1977 Tom and Dona moved to Dayton, Ohio where he became involved in the development of Emergency Medical Service Systems that resulted in the birth of the “911.” He testified before Senator Edward Kennedy’s Committee on the benefits of EMS in saving lives in a more unified health delivery system.

Over the following years, Tom worked for Blue Cross/Blue Shield Health Insurance, developing Health Maintenance Organizations for employees of companies offering group medical care. He retired from the health care industry in 1983 and happily joined Dona in her antique business specializing in American quilts and early Americana. Tom and Dona participated in over 500 antique shows across the country until 2007.

In 2000, Tom and Dona moved to Door County and lovingly remodeled the Sister Bay farm originally built by Dona’s grandfather Daniel Hedeen in 1890. They lived on the beautiful farm, where both Dona and her mother Mamie Nelson were born, until this past summer, when they moved to Scandia Village. Tom and Dona relished traveling together throughout the world in their retirement; and also spent many winters away from Door County with their son Peter in Florida. Tom’s family and friends were amazed at how strong he was despite an extensive history of multiple cancers and malaria.

In lieu of flowers donation can be made to Door CANcer Inc.

Memorial service for family and friends will be held later this spring or summer.