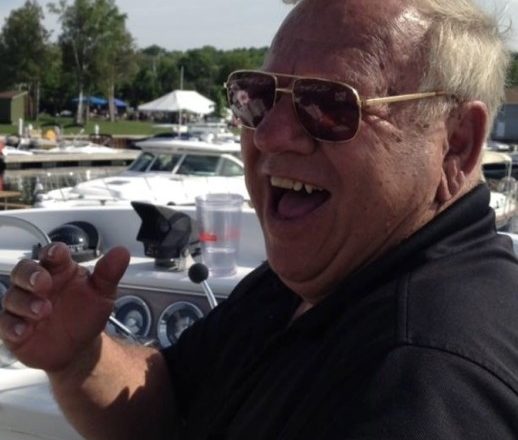 Todd was born to Orville Alfred Voeks and Dorlene Viola (Herbst) Larsen. He was raised in Baileys Harbor by his parents and grandparents, Paul and Viola Herbst. In his youth, he suffered and beat leukemia.

Todd started his plumbing career with Wilmer Anschutz in 1969. At that time, he was also running projectors in the evenings at the SkyWay Drive Inn, owned by his father; and tending bar for his grandparents at Paul’s Glass Bar. In 1976, Todd decided to start his own plumbing business, known successfully as Voeks Plumbing. In 1991, Todd’s son, James, started working for him. James and his son, Ethan Voeks, will continue to operate Voeks Plumbing.

At the young age of 18, Todd and Shirlee Carlson started their family. They were blessed with two children: a daughter, Amie Olson; and four years later, a son, James Todd Voeks. Later in life came his four grandchildren, each touching his heart in their own special way. His grandson, Lance Corporal Mitchell Olson, is currently deployed in Norway with the USMC.

Todd was a member of the Sister Bay/Liberty Grove Fire Department from 1972 until 2016 and retired as assistant chief serving under Lyle Lundquist, Steve Mann and current Chief Chris Hecht. He was the longest-serving assistant chief in the department.

Todd’s hobbies throughout his life included karate and teaching karate, being a pilot and owning his own Cessna airplane, boating, keeping his beautiful lawn as green as could be, Western and karate movies, Corvettes, Cadillacs and taking slow rides going nowhere at all.

He was preceded in death by his father, Orville Voeks; mother, Dorlene Larsen; and grandparents, Paul and Viola Herbst and Ella Voeks; and son-in-law Mitchell Olson, who were all very dear to him.

Todd’s life will be honored with a memorial service at Immanuel Lutheran Church in Baileys Harbor on Saturday, Dec. 28, 12 pm. Visitation will be at the church, 9 am – 12 pm.

Everyone who knew Todd knows he wasn’t much for going to the doctor. Near the end, he offered some words of advice to everyone he knew, and we’d like to share them with you: “Get a colonoscopy.”

“Our family would like to express a huge thank-you to Chief Chris Hecht for his support and guidance, PA-C Eric Danihel and his St. Vincent staff at the Sturgeon Bay facility, and also to the many special folks who continually supported our dad through his cancer journey.”

Casperson Funeral Home and Cremation Services of Sister Bay are assisting the Voeks family. Expressions of sympathy, memories and photos of Todd can be shared through his tribute page at caspersonfuneralhome.com.