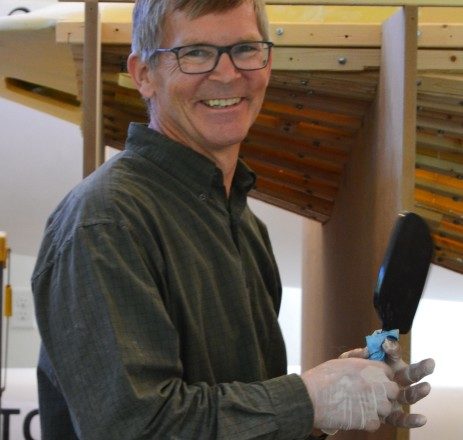 Tom W. Paulson, of Sturgeon Bay — formerly of Kaukauna — died suddenly on Wednesday, April 21, 2021 in his sleep. He was just 8 days shy of his 60th Birthday, yet managed to do more in his life than many people can dream of.

He was born April 29, 1961 in Kaukauna; the son of Jerome and Margaret (Hall) Paulson. Tom graduated from Kaukauna High School in 1979. KHS was also where he met his best friend, the love of his life, and his partner in crime, Mary (nee Onkels). Tom and Mary were wed at St. Mary Catholic Church in Kaukauna on September 22, 1984. They loved to travel together and spent a few years adventuring as a pair before settling down to raise their three children: Sarah, Nick, and Erik.

Having a family spurred Tom to take his future more seriously. When his job offered the opportunity to earn a degree from Lawrence University in Appleton, he jumped on it. He graduated with a degree in Chemistry in 1993 after a grueling schedule of full-time work with class as a full-time, non-traditional student with a wife and two babies at home. The lessons he learned during that period shaped the unbelievable work ethic that is part of his legacy.

When he retired from Fox River Fiber in 2018 as the Vice President of Operations after 25 years, he left behind a company indelibly shaped by his dedication to get things right. More than a partial owner of FRF, he was a leader with a drive to constantly improve and do better. This applied to everything he touched.

A music lover since childhood, he played the banjo and the fiddle. His banjo pickin’ led him to form the bluegrass band Homemade Brew, whose members have been his brothers in music — and an extended family — for 37 years. He always said he was only an “okay” player, but that was lie. He practiced one of his instruments every single day. The fiddle was his carry-on for every trip. If there was a jam session, he wanted to be there. He loved to share music as a performer, as an audience member, and as a teacher.

Tom thrived on being active. From earning a black belt in Tae Kwon Do, to rowing, biking, cross-country skiing, sailing, he was constantly moving, and he wanted you to be a part of it. He was always scheming to maximize every day and fit just one more thing in. He ended every day by saying “That was a big day!” even if everyone else had (mistakenly) thought it was just a normal day. His latest project was building a spectacular 32 ft. trimaran which he had aptly named “The Tomfoolery.” Working on his boat had been a labor of joy for almost six years.

He was preceded in death by his father, Jerome Paulson.

Visitation will continue on Friday, April 30 at Corpus Christi Catholic Church, 811 W. Juniper Street, Sturgeon Bay, WI 54235 from 12:00 noon until 1:45 p.m. A Mass of Christian Burial will be celebrated at church at 2:00 p.m. with Fr. Ryan Krueger and Fr. Tom Pomeroy concelebrating.

Due to COVID-19 protocols, there will be capacity limits observed during visitation at funeral home and the Mass. There are large television screens throughout the funeral home for viewing the 7:00 p.m. service no matter what distance and room you may be in. Face masks will be required, temperatures will be taken, and hand sanitizer will be provided. Huehns Funeral Home has air sanitation throughout funeral home for your safety. However, the family still requests that if you may have been in contact with someone actively infected with COVID-19 that you refrain from celebrating with us in person.

Tom was blessed with many gifts in his life. One of his passions in retirement was giving back to the Lawrence University community that gave him so much. In lieu of flowers or gifts, we ask that donations be made to the Lawrence University Net Zero Björklunden project. It is an effort dreamt up by Tom to make part of the Lawrence campus a living laboratory on eco-friendly energy for students. Donations can be made here: https://app.mobilecause.com/form/WprGdw?vid=iels8

Expressions of sympathy, memories, and photos of Tom may be shared with his family through his tribute page at www.huehnsfuneralhome.com.