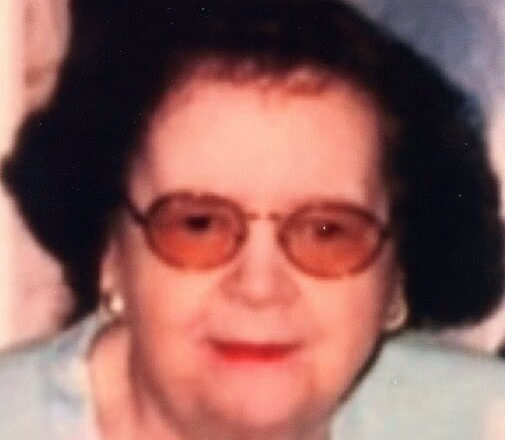 Veronica (Mrs. Julius) Ann Vertz, born March 24, 1927, died at the age of 95 on June 26, 2022, in Sturgeon Bay, Wisconsin.  She was born in Two Rivers, the daughter of the late Adam and Emily Buynoski.  As a professional musician for most of her life, one of her first positions involved working for WOMT radio station in Manitowoc, where, she had her own program called “Round Up Time.”  Other members of the radio program included Rose Gordon, Dorothy Langman, Iva Koba, and Caroline Langinese.  Over time, Veronica played piano and accordion with many local bands, and later formed her own trio. Bill Frederickson was on sax and clarinet, with Jerry Mickelson on drums.  She is fondly remembered by many from her many years of entertaining.

On October 13, she married Julius L. Vertz, son of Anton and Mary Vertz of Sturgeon Bay.  She had two daughters, a step son, six grandchildren, and six great grandchildren, listed below.

Veronica had a lust for life, and she strove to enjoy it, as long as possible.  She thanked God for every day she had on this earth right up to her last days with us.  Time she was able to spend with her family were invaluable – her children & grandchildren were her world.

Those who knew her, knew her generosity.  She belonged to the Wausau Eagles Club and also organized Christmas parties for underprivileged children for several years.  She was also a devout Catholic, a member of St. Joseph parish, in Sturgeon Bay.

Veronica also had a gift for communication—whether through music, spoken or written words.  She often shared her opinions on local matters in letters to the editor or joined into conversations on the radio.

She was preceded in death by her husband Julius, parents Adam & Emily Buynowski, and brother John Buynowski.

Funeral services will be 1:00 pm on Thursday, June 30, 2022, at St. Joseph Catholic Church with burial in St. Joseph Cemetery.  Friends may call at the church on Thursday from 11:30 am until the time of service.  Forbes Funeral Home is assisting the family.

Special thanks to Cherry Cove Assisted Living, and Compasses Hospice for all of their support.  God bless.