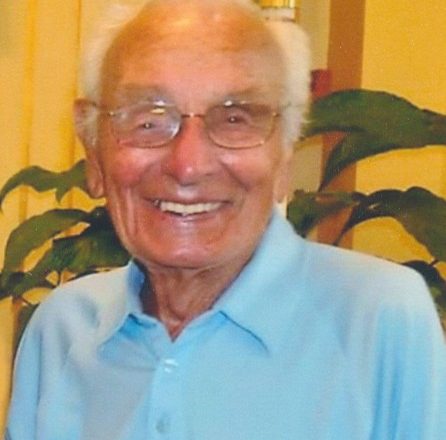 He was born in Brooklyn, New York, the son of the late Frank and Margaret (Bruce) Sherrick. After graduating from high school, he enlisted in the United States Navy. He met the love of his life, Noreen Marie Collins, at a USO dance for the troops near the advent of WWII, and the two wed on July 13, 1946, at Chicago’s Holy Nativity Parish. Vince and Noreen celebrated 68 years of marriage before she preceded him in death on November 29, 2014.

Vince worked as a mechanical engineer for various companies in the Chicago area for more than 40 years. He and Noreen then moved to Door County full time to enjoy their retirement.

Vince was a member of SS Peter and Paul Catholic Church in Institute for many years. He loved sailing on his boat, fishing, sitting at the beach and golfing at Cherry Hills.

He was preceded in death by his parents; loving wife, Noreen; great-granddaughter, Kristin; one brother; and two sisters.

Vince’s life will be celebrated with a mass of Christian burial on Monday, Oct. 7, 11 am, at SS Peter and Paul Catholic Church, with Fr. Robert Stegmann officiating. Military honors will be performed following the mass. He will be laid to rest in the church cemetery next to his wife, Noreen.

The Sherrick family extends a heartfelt thank-you to Algoma Long Term Care and Unity Hospice for their compassionate support and care.

Huehns Funeral Home in Sturgeon Bay is assisting the family. Expressions of sympathy, memories and photos of Vince can be shared through his tribute page at huehnsfuneralhome.com.