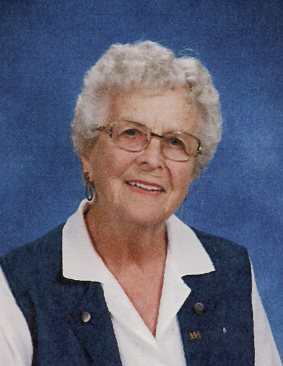 Virginia Grace (Kramer) Hanson, of Ellison Bay, died May 15, 2022 at Door County Medical Center in Sturgeon Bay at the age of 97.

Virginia was a lifelong Door County resident. She was born in the German Settlement a few miles south of Sister Bay on July 15, 1924, to Melvin and Mabel (Grasse) Kramer. On October 2, 1943, she married Russell Hanson of Ellison Bay at Trinity Lutheran Church. They farmed and lived on the Hanson Homestead on top of the Ellison Bay hill all of their 64 years. She attended Liberty Grove and Sister Bay grade schools and three years at Gibraltar High School. Her senior year, her family moved to Brussels, where her father was a cheese maker. She went to Brussels High School and graduated in 1942. There she met all of her Belgian friends; their friendship continued all of these years. She played clarinet and violin in the band. Virginia was baptized in Sawyer, Sturgeon Bay and confirmed in 1941 at Zion Lutheran Church in Sister Bay.

Russell passed away April 30, 2008. They enjoyed many winters at their home in Ruskin, Florida and traveled to Sweden, where Russell’s father, Albert, was born. Virginia enjoyed refinishing many pieces of antique furniture and spent many hours searching family history of the Hanson and Kramer families. She was a member of the Shepherd of the Bay Lutheran Church and the Liberty Grove Historical Society, which she is proud to be a part of. She was always excited to see the large freighters pass through the waters of Green Bay. This year in early spring, she was thrilled to see her first of many from her home. Her love of music- she taught herself to play the button accordion- Polka music was her favorite. Virginia continued living on the Hanson Homestead until her passing.

She was preceded in death by her parents; husband; brother, Willard Kramer; son, Bruce; infant son, Ned William; brothers- and sisters-in-law; and nieces and nephews.

Virginia’s life was celebrated during a funeral service at Shepherd of the Bay Lutheran Church in Ellison Bay on Friday, May 20, 2022 at 12:00 p.m. Visitation was held at church from 10:00 a.m. until the time of service. Virginia would be so proud that her great-grandchildren (Christopher, Nicholas, Logan, Brianna, Griffin, Kayla, Eva, Austin, Avery, Samuel, Jordan, Brooklyn, and Arlo) were honored to carry her to her final resting place in Trinity Lutheran Cemetery, the last one laid to rest within the cemetery.

If desired, memorial contributions may be given to Shepherd of the Bay Lutheran Church or Liberty Grove Historical Society.

The family would like to thank Door County Medical Center, Dr. Mildenberg, Dr. Binard, all the special nurses and the staff that cared for and treated Virginia with kindness and always a smile. There was always a stop at the hospital gift shop.

Casperson Funeral Home of Sister Bay assisted the Hanson family. Expressions of sympathy, memories, and photos of Virginia may be shared with her family through her tribute page at www.caspersonfuneralhome.com.