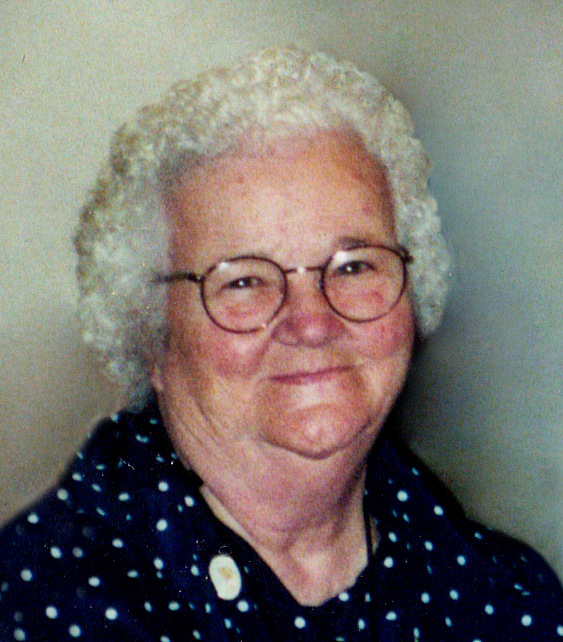 Virginia Theresa Tolson, 88, of Sturgeon Bay, formerly of California and Florida, went Home to the Lord Tuesday night, December 29, 2015, while at Golden Living Center-Dorchester where she had been living the past four years.

She was born May 6, 1927, in Hagerstown, MD, the daughter of Francis James Butler and Anna R. (Matthews) Butler. After high school, Virginia was employed as a waitress and maître d’ most of her life, working days and nights, in addition to caring for her family.

In her later years, she provided housekeeping and cooking care for priests at the Catholic parishes she attended in California and Florida. Virginia was deep in her faith. She had a great love for the Sacred Hearts of Mary and Jesus. Wherever she was living, her walls were filled with pictures of Mary, Joseph, and Jesus and the ETWN Catholic Television channel on in the background as these things comforted her.

Virginia grew in her Catholic faith throughout her life. She initially hoped to travel to Fatima and had earned the money for the flight down payment from playing bingo (which she also enjoyed), but she was always giving her money away to those in need. Over time, she was repaid (in excess) by those she had lent money to and eventually had enough money to take the trip she had longed to make. Due to her plane’s inability to land, Virginia never made it to Fatima. Instead, she landed in Medjugorje. Virginia visited Medjugorje five times throughout her life and had many spiritural encounters with Mother Mary. These experiences led her to a life of prayer and the Lord. Often times, Virginia would need to be reminded to eat, not because she wasn’t hungry or didn’t care to eat, but instead, because she was praying for the person sitting beside her or nearby.

While living in Florida, she attended Little Flower Catholic Church in Pensacola and was a member of the Third Order of the Sacred Heart, there. In Sturgeon Bay, Virginia attended St. Joseph Catholic Church, where she made many friends – Janice Farmer and Paul De Vries, who Virginia loved as her adopted daughter and grandson, Marge Albee, and Joan Ryan, amongst others. She loved people and was so very generous. Those who knew her, knew what a feisty soul Virginia was. Virginia liked flowers and enjoyed watching birds and people.

She is survived by her five sons who she was very proud of and loved very much, Leland “Patrick” Hill, Vincent (Linda) Hill, Norman (Carol) Hill, all of California City, CA, Robert (Gayle) Hill of Arizona, Forrest “Matthew” (Shawnamarie) Hill of California City, CA; many grandchildren; great-grandchildren; sister, Clara Elizabeth “Betty” Kozan; other relatives; close friends, Janice Farmer of Florida and Sturgeon Bay, Paul De Vries, Marge Albee, Joan Ryan, all of Sturgeon Bay; friends from the Golden Living Center-Dorchester; and many others.

A Mass of Christian Burial will be celebrated at 10:30 a.m. on Saturday, January 2, 2015 at St. Joseph Catholic Church in Sturgeon Bay with Fr. Bob Stegmann as celebrant. Virginia will be laid to rest in St. Joseph Cemetery Columbarium.

There is no scheduled visitation. The Rosary will be prayed at 10:10 a.m., Saturday morning, at the church.

A special, heartfelt thanks goes out to the staff of Golden Living Center-Dorchester and Joanne Guilette for the care given to Virginia over the years.