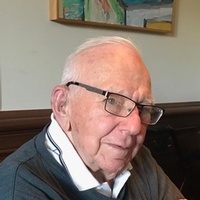 Wayne Edward Ault, 97, passed away quietly at his residence at Scandia Village in Sister Bay, Wisconsin on Jan. 1, 2018. A memorial service celebrating his life will be held Jan. 20, 2018 at Shepherd of the Bay Lutheran Church in Ellison Bay, Wisconsin; with visitation at 10 am, followed by the service at 11 am. Pastor James Honig will be officiating. A lunch will be provided after the service.

Wayne was born Nov. 28, 1920, in Hammond, Indiana, the eldest of four children of Fay Ottis and Hazel Forburger Ault. He earned fire protection and electrical engineering degrees from Illinois Institute of Technology in 1943, and shortly after graduation he enlisted in the Navy, serving with the Naval Research Laboratory in Washington, D.C., where he met his future wife of 70 years, Dorothy Mae Knight, a legal secretary for Oklahoma congressman Jed Johnson.

Following the war, Wayne and Dorothy settled in Boardman, Ohio, where they raised their family and Wayne launched a long, fulfilling career in fire protection. He served for many years in the Ohio Professional Engineering Society, including a term as President. His work moved the family to Aurora, Ohio; later to Deerfield, Illinois; semi-retirement at their much-loved lake home in Fremont, Indiana; and finally to full retirement in Sister Bay, Wisconsin.

Through his long, productive life, Wayne was admired by family and friends alike for his lifelong love of learning. He was an avid reader and loved pursuing information “down the rabbit hole.” He also enjoyed many years of sailing, camping and spending time with his family on memorable adventures.

Wayne’s daughters would like to express their deep gratitude to all the residents and staff of The Meadows at Scandia Village for the warm friendships and caring for their “Dad,” particularly after the death in 2014 of his beloved wife Dorothy.

In lieu of flowers, the family has requested donations may be made to Shepherd of the Bay Youth Fund (P.O. Box 27 Ellison Bay, WI 54210), or to the Good Samaritan Society/Scandia Village (10560 Applewood Road Sister Bay, WI 54234).