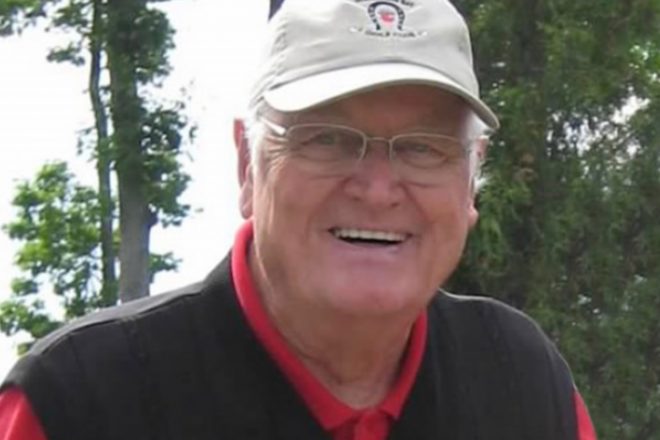 Bill was born October 16, 1930 in Sturgeon Bay, the son of Bernard and Alene M. (Olander) Boettcher. He graduated from Gibraltar High School in 1948 before pursuing his education degrees in Physical Education and English from U.W. LaCrosse where he was also a member of the golf team. He served his country during the Korean War and enlisted with the U.S. Army serving as Sgt. Major on the ground in Korea. After returning from Korea, Bill finished his studies at LaCrosse before returning to the family business in Baileys Harbor where he and his father owned and operated the Boettcher Garage selling Ford automobiles, eventually becoming sole owner in 1954. After a chance meeting with Ed Karcz, Bill was offered the Sales Manager position for Karcz Ford in Pulaski where he worked from 1968 – 1972.  He would eventually become partners in Boettcher Nelson and finally Boettcher Automotive in Sturgeon Bay for 40+ years.

On December 14, 1983 he married Kathryn Yvonne Olsen at Bay View Lutheran Church. His first wife, Eunice had passed away in 1982.

Bill was active in various civic and fraternal organizations throughout Door County. Sturgeon Bay Breakfast Rotary, Baileys Harbor and Sturgeon Bay Lions Clubs, the Door County Community Foundation, and the Boys & Girls Club of Door County were beneficiaries of his time, talents, and wisdom as he guided various projects throughout his membership and participation. In addition to enjoying fishing with his family, Bill was an accomplished golfer whose skills and abilities were known throughout the State of Wisconsin as he held various tournament Championship titles. He shared that knowledge and ability as he influenced the lives of many young people through coaching the Sturgeon Bay golf team for many years where respect for your opponent was emphasized. He wasn’t teaching just how to win, but how to lose. “Golf was a way to better their character and help them in all aspects of life”.

Bill’s philosophy at life was simple, “I strive to be better than I am. I don’t need to be the best, just better”.

Preceding him in death were his parents, Bernard and Alene Boettcher; his first wife, Eunice; brother, Bob; granddaughter, Marla Murphy; and his best friend and son-in-law, Paul Mathias.

A celebration of Bill’s life will be held at 1:00 p.m., Saturday, December 18, 2021 at Immanuel Lutheran Church in Baileys Harbor with Rev. Gary Scharrig officiating. Military honors will follow the service at the church.

Burial will be at Bayside Cemetery near Sturgeon Bay.

Those in attendance of the visitations and/or service are asked to wear a face mask. If you have any covid symptoms or are unable to attend, please watch services live (provided Wi-Fi is available, or on taped delay) at Huehns Funeral Home Facebook page.

Memorials may be directed in Bill’s memory to the Boys & Girls Club of Door County and Immanuel Lutheran Church in Baileys Harbor.