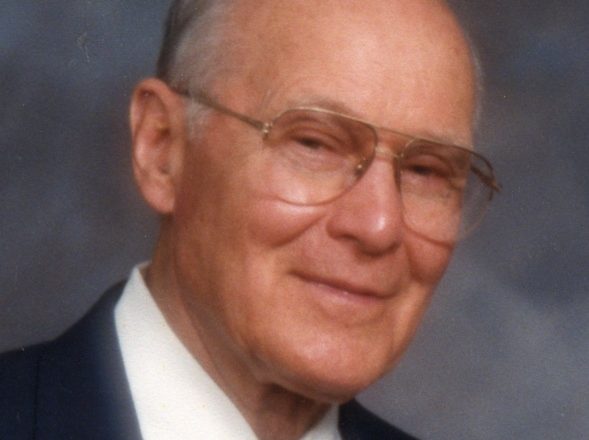 A memorial service for Bill Neddersen will be held at the Sister Bay Sports Complex Pavilion, 2155 Autumn Court, on Saturday, Sept. 11, 11 am. Please take memories of Bill to share, as well as a face mask. A light lunch will be served after the service. A recording will be made for future posting on YouTube. To get a direct link to the YouTube post, visit doorbell.net/video.

William Neddersen, 95, died peacefully at Door County Medical Center in Sturgeon Bay. A man of gentleness and generosity, Bill was deeply loved by his family, the Scandia community and many other friends. He is irreplaceable. His family wishes to thank his many precious friends who have extended their loving arms.

Bill’s love and care for his family knew no limits. He was a role model in many ways. A humble man, he didn’t realize how respected he was. Bill was genuine, polite, honest and engaging. He was a leader during his career, in the Navy, and at Scandia Village. Always responsible, Bill volunteered all his life. In his church, in scouting, PTA, and more recently for 15 years at Scandia Village, where he poured coffee and tea twice a day in the Care Center. He was a lifelong athlete who enjoyed racquetball and golf. A proud Packer stock owner, he supported the team with cautious optimism. Bill had a sharp, active mind throughout his 95 years. He enjoyed living, his family, friends, growing tomatoes, eating spaghetti and pretending to be a curmudgeon.

Bill was born in Milwaukee to Bertha and Orville Neddersen. He grew up in Waupun, Wisconsin, where he played football and boxed in high school. Bill graduated from the University of Wisconsin-Madison with a degree in electrical engineering. He was a member of Sigma Nu fraternity and the Navy V-12 College Training Program, which created officers at the ready during the World War. Bill was on the 1943 undefeated UW boxing team that won the NCAA championship at a time when boxing was a popular spectator sport. In 1945, he was presented with the George Downer Award, the highest honor given a UW boxer based on scholarship, sportsmanship, boxing ability and competitive spirit.

He also attended the Navy’s Midshipman’s School at Columbia University. On V-J Day, he and his friends rented a hotel room to sleep, too tired from the intense training to celebrate in New York City. In 1952, Bill was recalled for service during the Korean Conflict. He was a lieutenant on the PCED 898, a patrol craft he navigated through enemy waters, then was stationed in San Diego, where his family joined him. Following his return to Wisconsin, Bill stayed in the Navy as a reservist, eventually retiring with the rank of commander.

Bill’s career was spent at Wisconsin Public Service (WPS, now WEC Energy Group). While working for WPS in Merrill, Wisconsin, he met Lyvonne “Bonnie” Berg, and they were married in January of 1950. Bill worked in the Hydro Department, managing numerous plants, and expanded his career to the Transmission Department. He was instrumental in plans for high-power transmission lines from Canada to the U.S. He also worked with the Wisconsin Public Utilities Commission in the early days of planning for alternative energy sources. Bill retired in 1989 as a second vice president of the corporation.

In 2003, Bill and Bonnie moved to Scandia Village, where Bonnie preceded him in death in 2006. While she was in the Care Center, Bill started pouring coffee and tea during meals, a volunteer service he continued until late last year. At Scandia, Bill was Meadows president twice and always an active, supportive member of the Meadows family. He deeply appreciated the Meadows community and the precious friendships he made, so it was important to him to give back by providing sweet corn for the Scandia community each August and encouraging any resident passing his patio to sample his tomatoes.

The family could not be more thankful to the staffs of Scandia Village and Sturgeon Bay Medical Center for their incredibly loving care. In lieu of flowers, donations to the Scandia Foundation in Bill’s name would be welcome.

Casperson Funeral Home & Cremation Services assisted the Neddersen family. Expressions of sympathy, memories and photos of Bill can be shared through his tribute page at caspersonfuneralhome.com.