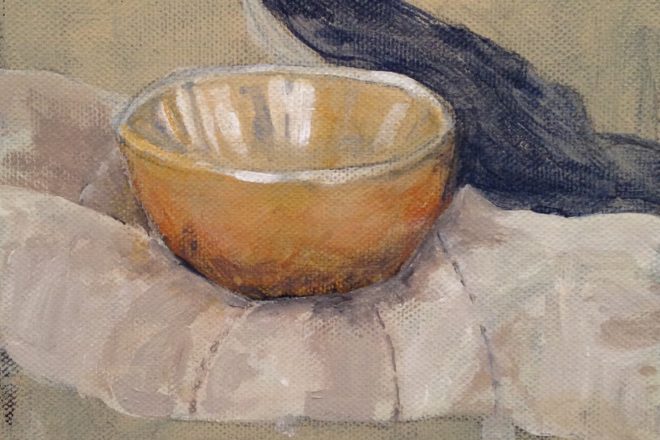 “Mitten with Singing Bowl.” “To me, it symbolizes the whole exhibit. My mitten, which is another historical item, I’ve had those for 40 years and never lost one, and they were my cross-country mittens and now they’re my snowshoe mittens. They are my super pals. Just holding the bowl, it’s like me holding my objects. The whole exhibit is described in that one image.”

“It all started with a pair of socks.”

Sturgeon Bay artist Kristi Roenning affectionately recalls the quiet moment at home last winter that inspired the creation of her newest body of artwork, Objects of My Affection. 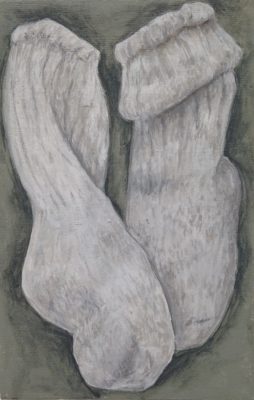 “Wool Socks as Muse.” The gray Wigwam wool socks that inspired Kristi Roenning’s newest collection of acrylic works, “Objects of My Affection,” on display this weekend at Chez Cheryl Artspace.

“I was meditating, finishing up some yoga, and there were these woolen socks, these old Wigwam gray woolen socks and I’ve worn out about 12 pairs of those over my years. They’re my go-to comfort, walk-around-the-house socks and I just looked at those and something hit me,” she said. “I saw myself in that object; I connected so much with those socks and they just visually cued something in my mind and the words ‘object of my affection’ came to my mind.”

In the several months since, those socks, along with 22 other objects, have become the focus of Roenning’s work in acrylic, which will adorn the Chez Cheryl Artspace during a three-day solo exhibition this weekend. While the objects that one purchases for their home signify at least a degree of affection, Roenning said that the objects she memorialized in acrylic on canvas had to have special meaning and “the ability to move me emotionally.”

“Some are old and worn like those socks,” she said. “My husband one day was doing the dishes and he held up the strainer spoon with the melted handle and said, ‘I bet you use this everyday.’ I was in the midst of seeking out these objects of my affection, which isn’t just anything, it really has to hit me like those socks did and I said, ‘Oh my gosh! I’ve had that 40 years, melted handle and all, and I never even thought of tossing it. I guess that’s an object of my affection.’ I brought that into my studio and painted it.”

Likewise with gifts given (a mug from her sister, and a smooth, striped stone from a friend), souvenirs purchased (a collection of delicate napkins from France), and her own personal hobbies (a canoe, bicycle wheel and snowshoes among them). In this way, the paintings in Objects of My Affection serve as a visual memoir of Roenning’s life.

“Slotted Spoon with Melted Handle.” “I’m sure somebody is going to say, ‘Oh yeah, I received that set of serving spoons for a wedding present,’ because everybody did when they got married, everybody got one of those. There were ladles, some of which I still have. I definitely have my little strainer spoon with the melted handle, which I think I did shortly after receiving it.”

But the artist also points out that these paintings, through the process of selecting and reflecting the items that inspired them, have themselves become objects of her affection. By sharing them with the public, she hopes to encourage others on a journey of reflection and self-discovery.

“My hope is that people … start looking at objects in their life that perhaps strike a chord like mine did with me and that if they listen to these objects, they will tell a story,” Roenning said. “Your story.”

The canvas paintings will be for sale and while Roenning cannot predict how she will feel about selling them, she looks forward to embarking on her next artistic endeavors – more abstracted paintings of objects and a potential series focused on her affection for family and friends, and their objects of affection.

“This one I see really going in a nice starting point for many works ahead,” Roenning said.

Objects of My Affection runs Sept. 3 – 5 with a special reception from 3 – 6pm on Saturday, Sept. 3 at Chez Cheryl Artspace, 8360 High Plateau Rd. just west of Baileys Harbor. The exhibit will be open for viewing Sunday and Monday from noon until 4pm. For more information, call 920.421.1690.