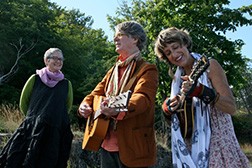 The group, made up of Sue Demel, Deborah Lader and Bruce Roper, will bring its original take on three-part harmonies, whimsical songs, oddball humor and spontaneous stories to the stage for the benefit of The Healing Project, a collaboration between Ministry Door County Medical Center and the Community Clinic of Door County. The project provides free integrative health care services to men and women in the county living with cancer.

Sons of the Never Wrong combines the crystal clear lead vocals of Demel (who also plays drums and some guitar), poetic songwriting and soft strumming of guitarist Roper, and talents of multi-instrumentalist Lader (on banjo, mandolin, mandocello or guitar) to create unique vocal harmonies and gorgeous arrangements that are inspired by a myriad of musical genres, including folk, jazz, pop and rock.

The band’s three members met 23 years ago and hit it off instantly. While they’ve been performing a majority of that time, there is still one thing the group is unable to do: figure out exactly what genre it fits under.

“We recognized right away that we had a penchant for odd harmonies, that we liked the idea of writing songs within songs, and that we created our own sound and we didn’t know it,” Demel says.

The band has been described by a variety of media outlets and venues in a variety of ways, though most notably through seemingly made-up genres, including alt-folk, indie folk pop, and “Peter, Paul and Mary on steroids.”

“They just make things up when they’re writing about us or describing us to their audience at a venue,” Demel explains.

Their original songs focus on many themes, though none more than love gone wrong “with a wink and a nod instead of a lesson learned,” Demel says.

“It’s more like, well, this is going to happen again,” she adds. “Because this is what life is and it’s beautiful anyway, and let me rhyme something weird with ‘cat.’ [Bruce has] got these funny ways of talking about hard things to hear but making it easy to listen.”

As for the band’s live performances? They’ve mostly been described as a mix of music, oddball humor and spontaneous stories.

“We have a problem not talking between songs,” Demel explains with a laugh. “Something will happen that day and it works its way into the act … we’re having the conversation we’d have in the car on the way to the gig in front of you. It’s very honest and ridiculous, and because of it I think what happens is everybody goes, ‘Oh, they’re weirdly regular like I am.’

“We don’t want people to think we’re doing something they can’t do, too,” she adds.

Tickets for the Music Heals Winter Concert Series are $15 per concert. For reservations and more information call 920.493.5979.