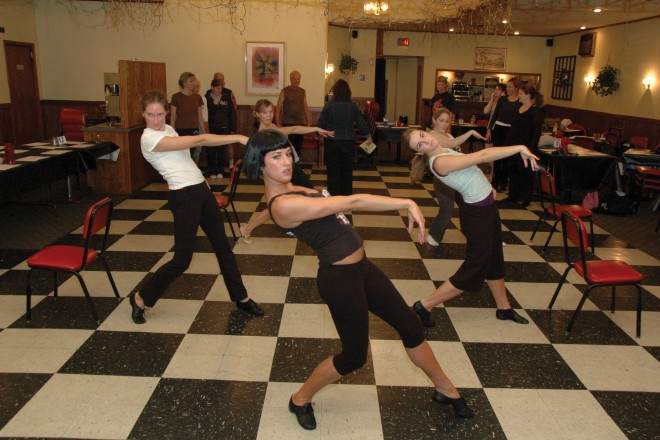 Some say that theatre had its origins thousands of years ago, with a group of friends seated around a campfire eating a meal and sharing stories about their day. Then, one person decided that the story would be better if two people told the story together, each acting out a different part. Over time, the stories became more elaborate, and more and more people became involved in the telling. Thus, theatre was born.

Thousands of years later this form of storytelling called theatre is firmly established, especially in culturally rich areas like Door County. And Isadoora Theatre Company, a relatively new addition to the scene now celebrating its fifth season, began creating theatre in much the same way.

In the winter of 2001, a group of friends gathered frequently at Bjِrklunden in Baileys Harbor to make dinner, drink wine, and read plays. Then one night someone suggested, “Why don’t we perform one of these plays?” The play they chose was All in the Timing by David Ives, and the founders of Isadoora Theatre Company – Andrew Olson, Ben Meyer, Jane Hillstrom, and Sheila Sabrey-Saperstein – were on their way.

From the very beginning, they wanted to create something fresh. The goal of the founders was to establish Door County’s finest community theatre ensemble, showcasing works of risk and artistic integrity that might not otherwise find their way to a Door County stage. Their vision was to create a theatre company that would challenge audiences as well as entertain, would provoke thought as well as laughter, and carve out a place in the greater landscape of Door County theatre. They agreed not only to produce shows primarily in the off season, when more community members could be involved, but also to encourage a broad range of talent to try their hand at acting, singing, dancing, designing, and directing – to invoke a truly “ensemble” feel where creativity could be encouraged and all were welcome.

Building a community theatre company from scratch was not without its challenges. “We only got some shows up and running by the skin of our teeth,” laughs President and Co-Founder Andrew Olson. “Some of the goals we set for ourselves – producing shows at multiple venues, keeping budgets low so ticket prices would be accessible for all, giving new performers a chance to be onstage – have turned into big challenges. It is always rewarding, though,” Olson is quick to add. “Staying up all night to get a set painted is worth it when you see how much audiences appreciate what you are trying to do, and how much the experience means to those who are involved. We grow with every show, and with every bump in the road we get better at what we do.”

Since the original production of All in the Timing in May of 2002, Isadoora Theatre Company has presented 13 fully-produced plays and musicals, as well as an original piece honoring war veterans entitled Living Up to Memorial Day. They have presented a wide variety of shows, from Sexual Perversity in Chicago and Assassins to The Foreigner, The Fantasticks, Side by Side by Sondheim, and The Laramie Project. Classic playwrights such as Tennessee Williams, Edward Albee, and Anton Chekhov appear alongside modern voices in the American theatre such as David Mamet, Jane Martin, Christopher Durang, and Stephen Sondheim. The shows Isadoora produces each have their own personality – sometimes family-friendly, frequently with more mature content, but always striving to present Door County audiences with top-quality productions of works that might otherwise only be produced in major cities.

Along with variety in the content of its seasons, Isadoora has always committed itself to reaching as much of the Door County audience as possible by varying the venues where they perform as well. With shows at the Ephraim Village Hall, Fish Creek Village Hall, Door Community Auditorium, Lawrence University’s Björklunden, Third Avenue Playhouse, Andre’s Food and Spirits, and Southern Door Community Auditorium, Isadoora has brought the theater experience to the doorsteps of many of the peninsula’s villages and towns.

Isadoora has also embraced a grassroots approach to theatre, something essential for a company that thrives and survives on volunteer support. While Isadoora is committed to hiring professional directors and designers, the overwhelming majority of people involved with any given production donate their time. A season of three, sometimes four, productions is only made possible through generous contributions and sponsorships of local businesses and patrons of the arts. Of equal importance are the organizations which donate space to Isadoora for rehearsals, set and costume construction, and performances. For a theatre company without a permanent home, this community support is vital to helping Isadoora continue to grow.

Isadoora Theatre Company is proud to be celebrating its fifth anniversary by presenting its most ambitious season ever. The season opened with Art by Yasmina Reza, directed by Peter Daniels, with performances at Peninsula Art School and Third Avenue Playhouse. Art is a comedy that won the 1998 Tony Award for Best Play that follows three friends as they discuss male friendship, intellectual honesty and, of course, what is or isn’t art. This winter Chicago, the musical by Bob Fosse, Fred Ebb & John Kander, will appear at the Door Community Auditorium. Led by the Artistic Team of Ross Dippel, Andrew Olson, Julia LaViolette, and Jane Hillstrom, Chicago is one of Broadway’s most popular and thrilling musicals. The winner of six Tony Awards, it’s an electrifying tale of greed, murder, and show biz, full of Roaring ‘20s jazz-based music and dance. The Fifth Anniversary Season closes in May with Tennessee Williams’ The Glass Menagerie, directed by Arthur Hopper. This famous play of modern American theatre, a drama of great tenderness, charm and beauty, will be presented at the Ephraim Village Hall.

In a few short years, Isadoora has grown from a small group of friends putting on a show with borrowed props and costumes from their own closets, to a semi-professional community theatre company that produces a full season of drama, musicals, and comedy each year. Along the way, more than 100 Door County community members from all walks of life and every level of experience have joined Isadoora – whether as board members, actors, designers, directors, technicians, stage managers, musicians, dancers, carpenters, graphic designers, or even ushers. And yet, Isadoora always keeps a firm hold on its roots:  a group of friends getting together to share the joy of theatre, even as it continues to grow.

“One of the things that we are most proud of is that Isadoora has touched the lives of so many people,” says Olson, “and that we continually provide opportunities for novices and professionals alike in all areas of theatre. Door County is a community blessed with a wealth of artistic talent, and Isadoora Theatre Company provides quality, professional experiences for all who get involved.”