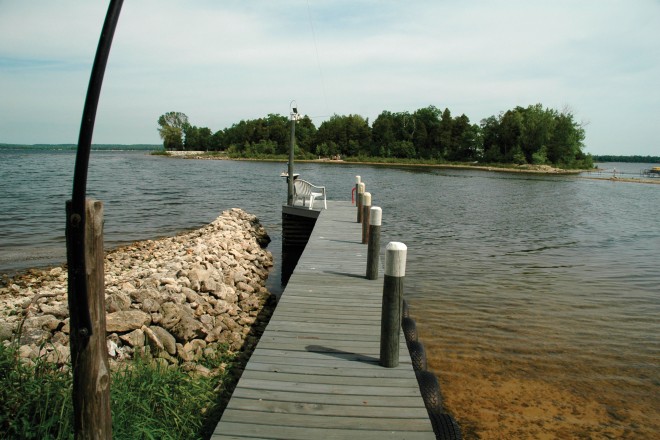 The island is accessible only by boat or amphibious vehicle. Photo by Dan Eggert.

As artists, John and Sally Guger see the world a bit differently from most people. For them, what might

ordinarily be mundane becomes inspirational. They see the possibility for exploration in the comings and goings of everyday life. They take the time to see the possibilities in every detail. The Gugers, along with their children, have even made their second home in Door County into a living, breathing, functional work of art.

The Gugers first became aware of Door County through friends who brought them up here in the 1970s from their then home in Rockford, IL. John, a sculptor and home builder/ remodeler, and Sally, a potter and art teacher, found the natural beauty of the peninsula and the concentration of artists and artist-owned galleries irresistible. Always drawn back to the area, the couple eventually purchased a cottage on Ridges Road in Baileys Harbor, on the Lake Michigan side. Besides being an artist, John is also an avid diver and sailor, so he wanted to be close to what he calls “the big water.”

The Gugers, who now live and work near Lake Wisconsin, northwest of Madison, maintain a very healthy sense of fun and adventure in their lives. In 1992, when the opportunity came around to purchase a private, uninhabited island in southern Door County, just off Little Sturgeon, this pair of artists jumped at the chance to take their Door County experience to an entirely new level of experimentation and exploration.

The island the Gugers purchased is alternately known as Basin Island or Snake Island. The 27-acre island boasts over a mile of shoreline and includes a 10- to 15-acre wetland. The name Basin Island comes from the shape of the island; in higher water eras, the middle of the island would fill to create a small inland lake. With recent lower water levels, the lake has become a wetland. Locally, the island became known as Snake Island, for obvious reasons.

The island sits only a few hundred feet from the shore of the mainland; but, it is a true island, accessible primarily by boat or amphibious vehicle. “It’s an island that’s close to shore,” says Sally Guger, “so if the weather’s bad, we can put on hip waders and walk to shore.”

When they purchased the island, the Gugers acquired 27 acres of wilderness, with only a single two-acre site upon which they could reasonably, logically and feasibly build a home. The home, which John designed and they built themselves, is decorated with artworks by the Gugers and others and contains whimsical touches throughout, like the tiny wooden birds who peek out from knotholes in the wood paneling, beautifully communicating the free spirit and sense of adventure that the family possesses.

What separates the Gugers’ home from most others, with “separate” being the operative word, is that their Snake Island home is completely “off the grid,” meaning that their home is totally self-sufficient, producing all of its own power and heat energy. The island family even has irrigation for a quarter-acre garden, which includes apple trees, wild plums, tomatoes, raspberries, cherries and herbs. The wind-driven irrigation tower also helps to scare away birds looking for an easy meal.

The island is primarily powered by a single sixty-foot windmill and an array of solar panels, which produce enough energy for all of the family’s needs. They maintain batteries to store the additional energy and keep a back-up generator, just in case. “We never use the back up generator,” says Sally.

“To be as self sufficient as possible was part of the attraction of living on the island,” she continues. “The economics of bringing electricity [to the island] didn’t make sense. It’s so nice to not pay anyone for an electric bill and it meets our needs very adequately. All your modern conveniences are there.” The only telephone available on the island is the family’s cellular phone. In addition to wind power, the Guger home utilizes passive solar heat and multiple wood burning stoves.

The three-story, 3,700 square foot house was designed by the family in an octagonal shape to take best advantage of the vistas all around the island; consequently, every room of the house has a spectacular view. “The octagonal shape is situated like a compass,” says Sally. “The front door faces due north, and the opposite wall facing the wetland faces south, which contains a wall of windows, so we get all the sunlight and passive heat. The Native Americans say the devil can’t hide where there are no corners; there’s nice energy about a circular form.”

The family began their plans to build as soon as they bought Snake Island. “We spent a lot of time just thinking about what to build, sketching on napkins,” says Sally. Once the plans were complete, the real work was ready to begin for the Gugers. “We did everything ourselves, except for the septic system and well drilling. We even did the rebar for the concrete ourselves. The entire house took many years to get to a completed state. We were really ambitious. Now, I’m glad it’s as big as it is.”

The first floor of the house includes a family room with a pool table, TV room, kitchen and a large workspace for John to practice his art The second level has a sitting area and two bedrooms.

The home is topped on the third floor with a master bedroom done in the style of an interior stateroom of an old wooden yacht. The room boasts a 360-degree panoramic view of the waters of Green Bay and the bluffs of Little Sturgeon. The elevation creates separation from the rest of the house and provides an amazing opportunity for storm and weather watching.

When asked what her favorite part of the house is, Sally doesn’t hesitate to answer: “My third floor. The sunlight and the water views come in from every angle. And John planned it that way. Originally the room was designed as John’s studio, but it became the master bedroom. With the bed raised high, I feel like I’m hiding away from the whole world up there.”

The work to build the Snake Island home was really a family project. Sally says that “the best memories are of it being a family activity and our kids in elementary or middle school working on the house all summer. It was an adventure. Our son, who’s now almost 21 recently said ‘You know Mom, the best part about the island was building it.”‘

With their adventure and self-sufficient island home completed, the Gugers can justifiably make a claim to be a modern day Swiss Family Robinson. “We did think of ourselves a bit like the Swiss Family Robinson when we were building the house and going through the adventure. I see it now as a sanctuary; it’s a short trip but it feels miles and miles away when you’re there.”

The Gugers are also fortunate that their island home will always remain a very private sanctuary. Snake Island is zoned as a natural area — because of zoning, no other residence can be built on the island.

“My older sister would say that owning an island was better in theory than in reality, but that’s not the way we see this. John’s a sculptor: the house to him, to all of us, is like a large sculpture.”

Perhaps the way the Guger family views their island home is best described by the ceramic plaque that hangs near the entrance: “Snake Island House, founded 1992. The land was cleared, trees were felled and dragons were slain. With great passion, these walls were coaxed to stand by the Guger family. John, Sally, Tristan, Sabrina.”