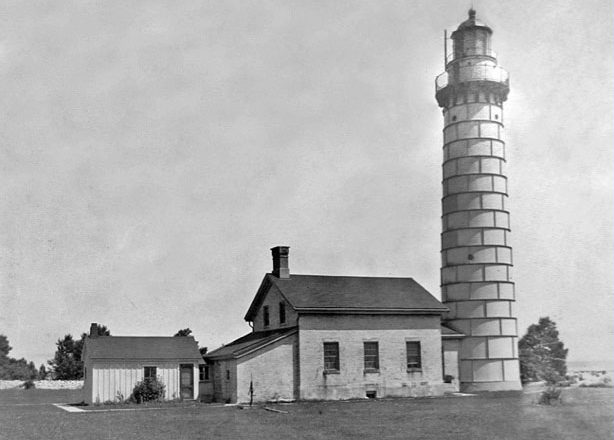 US Coast Guard photo of Cana Island, circa 1913.

Baileys Harbor, rich with lighthouses today, is lucky to have any at all, considering its initial venture in 1852. Everyone knows the village’s origin: The story of Captain Justice Bailey, who chanced upon the harbor as refuge from a storm and reported the rich resources of stone and timber to Milwaukee businessman Alanson Sweet. 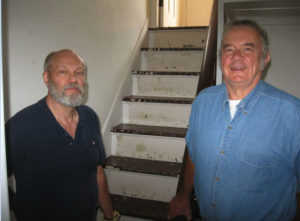 Zeller and Miller in the Baileys Harbor Range Light.

Sweet, a New Yorker who came west to seek his fortune, had as his motto, “Own nothing. Control everything.” He seized the opportunity to build the first lighthouse in the area and secured federal funding for the 53-foot “birdcage” light on the southeast side of the harbor in 1852. It was rock solid, three feet thick at its base, tapering to two feet under the cage-like iron top. (It’s still standing 164 years later, but now on private property.)

Ed Miller, a tour guide at Eagle Bluff Lighthouse, and Dwight Zeller, historic site manager at Cana Island, were the speakers at a recent meeting of the Baileys Harbor Historical Society. 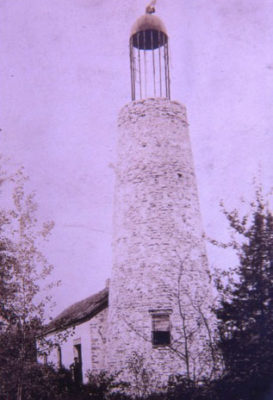 Unfortunately, they said, the birdcage light was situated in exactly the wrong place and probably caused more shipwrecks than it prevented. When it needed repairs 13 years later, some members of Congress had wised up and decided that it might be better to start over, so the $15,000 allocation was used instead to build the Cana Island light and the two range lights that are now part of The Ridges’ property.

The Cana Island light, Door County’s most photographed, was finished in four-and-a-half months in 1869 – six weeks ahead of schedule and 15 percent under budget (And it was a government project, Zeller quipped). Even thought it’s only the third tallest in Door County, at nearly 90 feet high above the water, visitors say it “looks like a lighthouse should.”

The Cana light was built on the highest point on the island, but that “highest point” in the late 1800s was less than seven feet above the average lake level, and Lake Michigan can raise 20-foot waves. Flooding was a problem. Men with teams brought in additional soil to raise an acre of the nine-acre island but that only rearranged the flooding a bit. A footbridge was installed to the mainland in the fall of 1890. No sign of it was found the following spring.

Cana’s six-sided oil house, made of dolomite limestone quarried on the island, is the only hexagonal oil house at any light station in North America. Cana also has a lovely copper dome and a Fresnel lens – 168 prisms of glass weighing 2,190 pounds – that came with “some assembly required.” 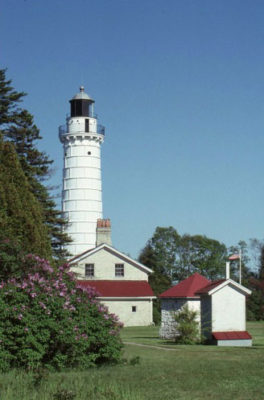 The Cana Island Lighthouse, built in 1869.

The lighthouse, keeper’s home and privy (a top-of-the-line two-seater) were built of Milwaukee cream city brick – beautiful but soft. After 33 years of exposure to the elements, the lighthouse required a cover of metal plates similar to a ship’s hull. During WWII, the Coast Guard regularly patrolled Cana Island to protect the lighthouse from water-borne saboteurs, keeping it secure to guide the ore boats headed to the steel mills down lake.

William Jackson was the first of Cana’s seven keepers, responsible for opening the station in April 1870. He had no experience in that line of work nor did his wife, hired as his assistant. Like many of the early keepers, Jackson was a Civil War veteran and had been wounded (although he had successfully ran a business and operated a farm) but the key to his $1,000 congressional appointment may have been the fact that he was chairman of Wisconsin’s New Republic Party, the party of Lincoln. (“Thank goodness,” Zeller said, “nothing like that goes on today!”)

Keepers were required to keep a daily log that was inspected annually. One Cana Island keeper wrote, “Weather fair to middling. Ships passing,” followed by 30 rows of ditto marks. (No word as to whether this passed inspection.) Another Cana log reported it took two days to clean the grounds after townsfolk partied there!

Cana was considered a “good” duty station, but William Sanderson, its third keeper, wrote in his log that it was “lonely and inhospitable.” He and his two assistants were the heroes of a rescue during the infamous Alpena blow of 1880, when a wooden, side-wheel steamship loaded with coal was deliberately sunk a few miles off Baileys Harbor to put out the fire in the hold. The keepers rowed out, saved the crew and brought them within 50 feet of shore, where they had to turn them over to men from the Baileys Harbor Coast Guard Life-Saving Station, their semi-rivals. 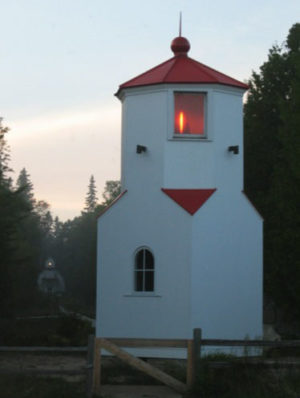 At this point in the program, Miller took over to describe early years at the Range Lights. There were once six pairs of range lights around the Great Lakes. Ours are the only ones still intact. Keepers here, like those of the lighthouse, had a thick book of regulations to follow. As employees of the federal government, they were to welcome all visitors. And the Range Lights, easily accessible from Baileys Harbor, had lots of visitors and many social activities.

A lot of painting went on. Several barrels of white paint were delivered annually and the keeper’s family was expected to use all of it. The giant Fresnel lens was to be cleaned and polished by 10 am every day. The keepers received uniforms in 1884 and were to wear them whenever they were in public.

Perhaps the most difficult regulation for many keepers was the one detailing the amount of government provisions delivered annually: 200 pounds of pork, 100 pounds of beef, two barrels of flour, fifty pounds each of rice and brown sugar, 24 pounds of coffee, 24 pounds of dried beans or peas, 4 gallons of vinegar and two barrels of potatoes. Plenty to feed a man for a year but the food allowance remained the same if he had a wife and children – like the Duclon family at Eagle Bluff with seven sons, some of whom continued to live at home, even after they had married. All the keepers were expected to supplement their rations with large gardens, hunting and fishing.

A traveling “library” – a wooden box of books and magazines – circulated among the light stations, helping to relieve the boredom and isolation.

When the Baileys Harbor stations opened, heated lard was the fuel that kept the lights burning – and it ran out every three hours. The Cana Island keeper had to climb the 126-step circular staircase many times a day, carrying about a quart of hot lard. But that may have been easy duty compared to the task of the Range Lights keeper. Fabian Trudell was 74 when he began his two years of service there. It’s surprising he lasted that long, carrying hot lard every three hours down the 950-foot boardwalk between the upper and lower lights. (Upper and lower, by the way, are The Ridges’ terms. The navigation names are rear and front.) 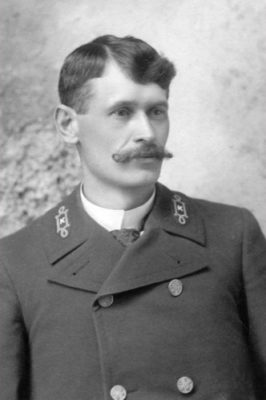 Henry Gattie (pronounced GATE-I), the last of the Range Lights’ eight keepers, was a handsome bachelor when he began his 27-year term in 1896. His social activities were eagerly followed in the local papers until he married Eve Hendrick of Baileys Harbor on Feb. 18, 1901. It was reported that the Duclon Orchestra (composed of those seven boys who lived at the Eagle Bluff Lighthouse) played at a ball in the newlyweds’ honor. Guests who partied into the wee hours expressed regret that the Gatties could not be married at least once a month.

When the Range Lights were converted to an unmanned acetylene system in 1923, Gattie was transferred to Cana Island. In 1930 the lights were wired for electricity and the keeper’s house, shuttered for seven years, became the parsonage for Immanuel Lutheran Church. The rent was $20 a year. Roy Lukes, whose popular column appears each week in the Peninsula Pulse, was the last resident of the keeper’s home.

But … two final stories, too good to omit. In response to a question from the audience as to whether a male keeper ever had a single female assistant, Zeller said, “Let me give you a brief summary: No.” And in response to a question about equality in pay, he responded that, from the beginning, male and female keepers (a number of whom succeeded their late husbands) were paid the same. The Suffrage Act of 1920 brought changes “to make things more equal for women,” who were henceforth demoted.