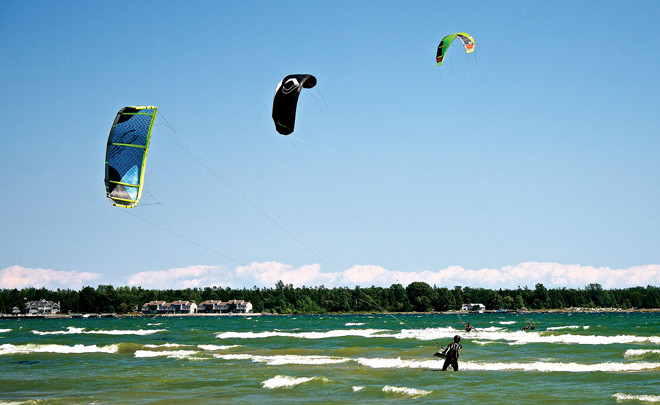 The sky in Ephraim and Baileys Harbor is full of kites belonging to surfers when the wind blows come summer. Photo by Len Villano.

Oh, I have slipped the surly bonds of Earth,

And danced the skies on laughter-silvered wings;

And done a hundred things you have not dreamed of –

Wheeled and soared and swung high in the sunlit silence.

Hovering there I’ve chased the shouting wind along

And flung my eager craft through footless halls of air… 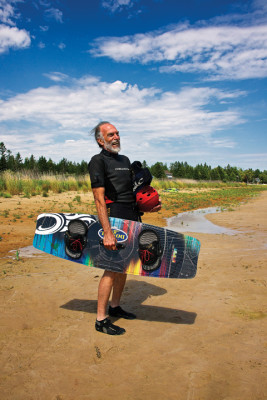 That poem was drilled into my head as a kid because it was recited against a patriotic backdrop as the sign-off for one of the three local TV stations in my hometown, and I always tried to stay up late on weekends to watch the old monster and sci-fi flicks the station showed, but inevitably woke to the sound of the poem “High Flight” being purposefully intoned by a Godlike voice to the image of a military jet flying past an American flag, just before the station went off the air for the night.

But that was a childish thing, long forgotten, stored deep in my memory banks, until the first time I spotted kiteboarders outside my office window in Baileys Harbor. Turns out my office happens to be a prime viewing spot for the kiteboarders at Ridges Park Beach, and as I watched them defy gravity, the poem “High Flight” suddenly bobbed back into my consciousness.

The poem could be describing those guys out there, I thought.

John G. Magee Jr. was an American who wrote “High Flight” in August 1941 while serving as a pilot in the Royal Canadian Air Force in England during World War II, before America entered the war. He included the poem on the back of a letter he sent to his parents. His father was curate of Saint John’s Episcopal Church in Washington, DC.

On December 11, 1941, just months after writing “High Flight,” Magee was killed when his Spitfire collided with a training aircraft. He was 19.

Of course Magee was referencing the ecstasies of piloting an airplane, but I defy anyone not to make the connection between “High Flight” and kiteboarders when they slip the surly bonds of Earth. 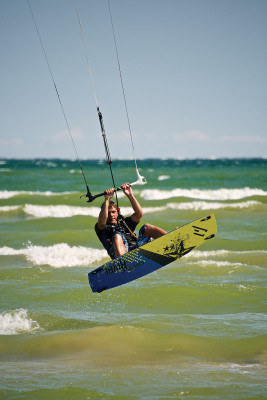 Here’s the rest of “High Flight”:

…Up, up the long, delirious, burning blue

Where never lark, or even eagle flew —

And, while with silent, lifting mind I’ve trod

The high untrespassed sanctity of space,

Put out my hand, and touched the face of God.

Of course you wish you could saddle up with the graceful, gull-like kiteboarders and skip the waves until airborne and touch the face of God.

But now you have a left leg made weak and useless when shattered in six places in a bicycle vs. truck accident the summer of 2010.

Earthbound for life, you can only wonder how it must feel to fly.