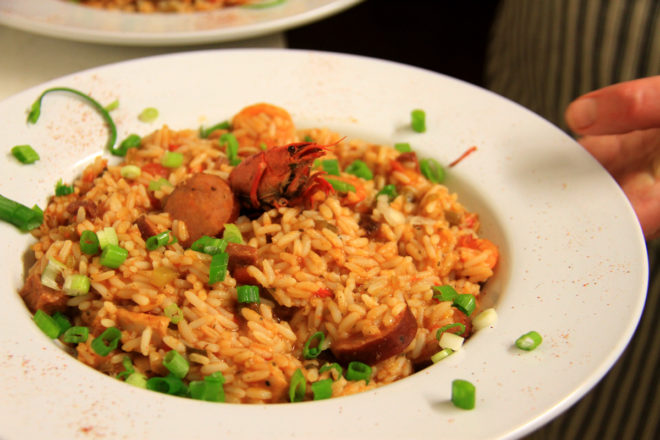 The jambalaya from Ohana Hospitality’s first pop-up dinner on November 4.

Gretchen (Gigi) Geurts and Robert (Robby) Van Egeren compose the chef team of Ohana Hospitality, a newly formed private-catering business that serves Door County. Though the business is new, they are no strangers to the world of cooking and hospitality, both bringing decades of experience to the endeavor. Their approach to food centers around the ability of great flavors to start conversations, foster new ideas and enhance well-being.

Geurts had lived in Door County in the ’90s, working in various local restaurants before leaving for many years, 10 of which she spent as a private chef in Hawaii. Having grown up in Appleton, she eventually felt a call to return to the area to provide a great place for her two teenaged children to finish their education. She made the move to Door County eight years ago, and during the years since, both of her kids have graduated from Gibraltar High School, the youngest in 2018.

Around the same time, Geurts met Van Egeren, who had just made his own full-time move to Door County after 10-plus years in the Green Bay area as an interior designer and part-time chef. The two soon became a couple – both in life and in the kitchen – after working together by serendipity at a catering event.

Geurts had been enlisted to cater a friend’s wedding, and as the plans evolved, Van Egeren stepped in to assist first with the pork roast and eventually as a second chef. The event was a success; guests praised the excellent food; and in the process, the two chefs learned that they had established a good working partnership.

After that, the seed of co-creating a catering and private-chef business was planted, and by June 2019, they had a name – Ohana Hospitality –  and had established an LLC.

“‘Ohana’ means ‘family’ in Hawaiian, and that’s really where our passion for cooking comes from: hosting our own families,” Geurts said.

They chose the second word, “hospitality” – meaning the “generous reception and entertainment of guests, visitors or strangers” – instead of “catering” to represent the intimate way in which they enjoy serving food. Geurts said their ideal catering experiences are the ones in which she’s able to interact with each guest.

“We want guests to leave feeling like they’ve learned something about the recipes and food,” she said.

Their cooking repertoire is a blend of styles inspired by their diverse cooking backgrounds and experiences traveling abroad. Each menu they create focuses on seasonality and using local ingredients while also infusing some ethnic flavors that are not commonly found in Door County. Geurts, who is also a yoga instructor and wellness coach, injects a health-conscious mindset into the partnership while Van Egeren is the crowned king of the grill. Together, they aim to create inspiring meals in people’s homes.

Despite having worked in the food industry for many years in Door County, Geurts didn’t feel there was much opportunity for private home chefs until recently.

“I credit the evolving food scene up here for really opening the door for this to happen,” she said, noting how the local food culture has begun to embrace a more creative, fresh way to dine during the past decade.

During the summer of 2019, Ohana Hospitality officially introduced itself to the community by hosting weekly, pop-up-style dinners at the Door County Brewing Company Taproom and Music Hall. Each week had a theme, starting with a Hawaiian-style menu; then it ranged from Vietnamese to Irish cuisine.

“I want to cook things that allow me to explore food – not necessarily ethnic food – but things that let me learn something new,” Van Egeren said. Along with seasonality and using local ingredients, they always like to include a bit of fusion in their cooking, pairing familiar comfort foods with something new or unexpected.

“We want to keep it approachable,” Geurts said. “There’s always somebody in the group who has a more conservative palate and someone who is a foodie, so we have to find a way to bridge that gap, making it fun, not pretentious. People want an experience, but they want to feel comfortable.”

This was evident during the first night of Ohana Hospitality’s latest pop-up series with Roots Inn and Kitchen, which had a Creole theme. The menu was a mixture of familiar, Southern-style comfort food – ham-hock soup and jambalaya – plus more adventurous items such as Natchitoches meat pies and catfish po-boys with maw-maw slaw. The pop-up series will run through November and December on the first three Mondays of each month.

On Nov. 11, the menu featured Vietnamese food, including spring rolls two ways, bahn mi, pho and a Vietnamese honeycomb cake that used an extract from the tropical pandan plant to give the cake a bright-green color. Dessert also included a ginger-honey artisan ice cream from local maker Lil’ Diablas. The wine pairing for the evening was a French variety – a nod to the history between France and Vietnam.

Last winter, Geurts and Van Egeren spent three weeks exploring Vietnam, which inspired them to explore more Vietnamese cuisine, and they plan to take more cooking-centric trips abroad to further inspire their menus. Get a taste of their latest creations on Nov. 18 and Dec. 2, 9 and 16, 5-9 pm, at Roots Inn and Kitchen, 2378 Maple Dr. in Sister Bay. No reservations are needed.

Ohana Hospitality is taking reservations for holiday parties and 2020 event dates through the contact form at ohana-hospitality.com. Follow its Instagram feed at @ohana_hospitality_doco for updates on pop-up dinner menus and more.