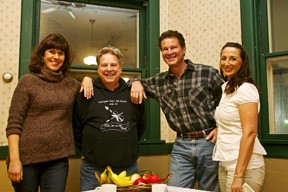 The old train station in Sturgeon Bay has been empty for seven years, but it will come to life again on Nov. 22 when Rogue Theater opens A Coupla White Chicks Sitting Around Talking. Lola DeVillers and Katie Lott Schnorr will play the roles of Maud Mix and Hannah Mae Bindler, made famous by Susan Sarandon and Eileen Brennan in their long Off-Broadway run in 1980.

The comedy takes place in the suburban Westchester County, New York, kitchen of Maude, who is having a tough day. Her husband is off on a weekend spree with his secretary and she can’t get rid of Hannah Mae, the pesky neighbor who has just moved up from Texas. Hannah badgers Maude into an unlikely friendship and the two eventually join forces against their errant and erring husbands.

DeVillers and Schnorr emphasize that the theme of women bonding and the power of female friendship is universal and demonstrates the gifts women get when they become “caught up” with other people.

Rogue Theater was founded on Jan. 1 by DeVillers and Stuart Champeau, both veterans of many local productions.

“Our theme is theater for the community,” Champeau says. “There are lots of talented people in Door County who are looking for a space to express themselves. We’re providing a place for this. We want to be available to musicians, middle school and high school students and children’s theater. For example, Sunshine House has moved their annual show to three different locations in recent years. We’ll be happy to offer our space to them. Whatever the community asks for, we will try to deliver.”

So far, Rogue Theater has produced the plays Lone Star, Eclipsed and It Had to Be You at the Lodge at Leathem Smith, John Martin’s, the Sturgeon Bay Jaycee Hall, the Birch Creek Music Performance Center and the Sister Bay Village Hall. About 20 actors, including Bill Baurenfeld, Renee Kujawski, Elliot Goettelman, Chris Weidenbacher, Chris Milton, Gwen Sieverson and Marcel Bruyere, are affiliated with the company. Others looking for an outlet for their talent are invited to inquire about joining. 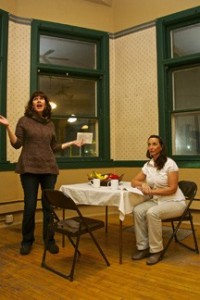 White Chicks, Rogue’s first production in its new home, The Depot Performing Arts Center, will run for six nights, Nov. 22 – 24 and Nov. 29 – Dec. 1. It is being presented in conjunction with the Women’s Fund of Door County, an organization that builds, enriches, and nurtures the lives of women and girls through collective wisdom and philanthropy. A representative of the Women’s Fund will introduce the show, and $5 of each $15 ticket price will be donated to the organization. Champeau says the theater company hopes to create similar community ties with each of its productions.

Champeau and Henry Timm, long involved in writing, acting in and directing local theater, are putting together a “radio-format” show of holiday-themed pieces, including some by Charles Dickens. “But not A Christmas Carol,” Champeau says. “Dickens wrote many other things about Christmas.” That show will play for two weekends immediately after White Chicks, and will be followed by a reprise of It Had to Be You, a madcap comedy set in New York on Christmas Eve, starring DeVillers and Champeau. Other actors will perform live commercials for sponsors.

The depot, at 341 N. Third Avenue in Sturgeon Bay, is in surprisingly good condition after sitting idle for seven years. The stage and seating for about 80 will occupy what was once the train station’s waiting room. Smaller areas will become a dressing room and a green room. Beverages will be served from the kitchen, and a license to serve beer and wine will be sought. Champeau notes that the building’s veranda is a great spot for receptions, with a nice view of the ship canal and sunsets.

A donor has provided blue velvet curtains – “about a mile of them,” Champeau says. They’ll be used not only for the stage, but also to completely wrap the room, covering the windows and improving acoustics.

An immediate need is for lumber – hopefully donated – to build the stage. Temporary lighting and sound equipment have been arranged, but DeVillers and Champeau say that help from the community will be needed to keep the group growing.