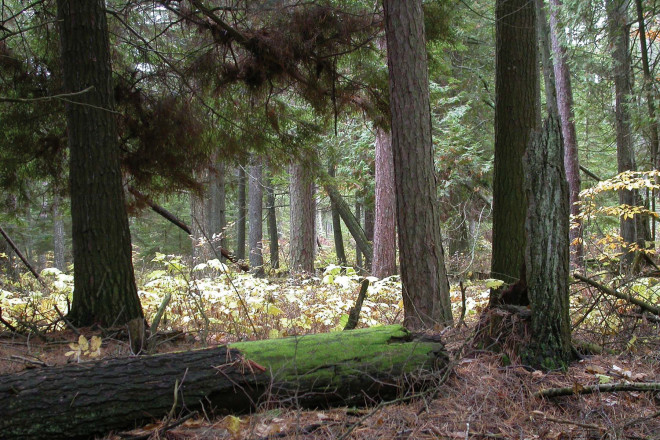 Growing up in the small town of Kewaunee, especially during my high school days from 1944 to 1947, taking long weekend hikes in our favorite woods was an absolute tonic, a necessity, for a few of my best friends and me. The privately-owned mixed hardwoods bordering the Kewaunee River on the north and west sides provided us with a virtual wilderness where we seldom met another person. Even though the woods had all been logged, the trees had been felled using cross-cut saws, and the logs had been skidded out in winter using horses, resulting in a minimum of damage to the understory plants. Plenty of big trees remained, and those second-growth woods were wonderful for hiking. 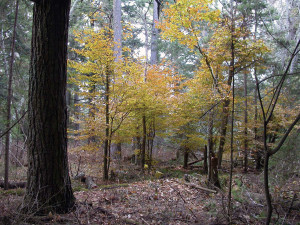 Perhaps it was in a high school English class where I was introduced to the poem “Evangeline,” by Longfellow, and was impressed by the first line:  “This is the forest primeval, the murmuring pines and the hemlocks…” Those words, along with an ongoing love for the forest, have remained with me through the years. Little could I have dreamed after graduating from high school that within 17 years I would be actually working in a “forest primeval,” as manager and naturalist at The Ridges Sanctuary in Baileys Harbor. Even though some logging had occurred on quite a bit of the property, there still existed plenty of large trees in the 200 to 300-year-old range. At least some of that property qualified as an old-growth forest, generally defined as an undisturbed forest for 200 or more years.

I soon was introduced to Toft Point, Miss Emma Toft having been on the Ridges’ board of directors from its start in 1937, and this was, and still is, a genuine “virgin” forest as Emma called it. Some of the towering White Pines, which had been toppled by the furious Armistice Day Blow of 1940, were sawn into lumber using a portable saw rig in the Big Field at the point. There, the thick layer of sawdust had remained virtually unchanged, nearly 25 years after the storm, when Emma first showed it to me in 1964. She maintained that the sawdust had remained in such wonderful condition because it was from virgin trees.

Today, the term old-growth forest has become the preferred description of the so-called “first,” “primary,” “original” or “virgin” forest. According to the October 2004 issue of the Wisconsin Natural Resources magazine, “Surveys conclude that only about one percent of Wisconsin’s old-growth forests remain in tact. According to a 1995 study by the U.S. Department of Interior’s National Biological Service, less than five percent of the lower 48 states’ original old-growth forests remain and most of this is concentrated on publicly owned lands in the Pacific Northwest.” 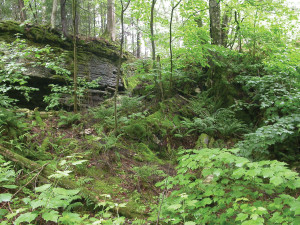 But, 200 years ago this was not the case – in the early 1800s Door County must have been pure primeval splendor. The relatively small number of Native Americans in this region then had little effect on the land, despite the fact that they did make use of fire to open up land for agriculture, to improve game habitat, to reduce insect pests in their camps and small villages, to remove cover from potential enemies, to improve conditions for better growth of berries, and, especially, to drive game. Nonetheless, forests were of value in that they supplied those early people with wood, fur and food.

The arrival of the early European settlers to Door County quickly changed the picture in the widely scattered old-growth forests. There was much wood to be had. In the appendix of my book, Toft Point, a Legacy of People and Pines, John W. Brann Sr. writes about early Baileys Harbor:  “Picture if you will a continuous pile of wood extending from Baileys Harbor to Sister Bay, a distance of nine miles, and you will have a pretty good idea of the amount of cordwood (note:  one cord is 8 ft. long, 4 ft. wide and 4 ft. high) shipped out of Baileys Harbor in 1869. To this pile of 8,300 cords add 650,000 feet of pine lumber and you will realize that Baileys Harbor was a busy port.”

Vast stands of old-growth Eastern Hemlocks were cut down, and only the bark was shipped to the leather tanneries to the south. Many schooner loads of cedar shingles, along with thousands of cedar poles and fence posts, were also sold. Bear in mind that other villages situated along the shores of Lake 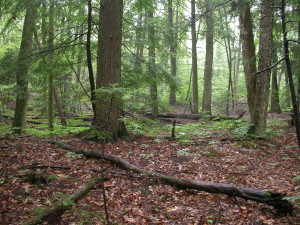 Michigan and Green Bay were also shipping out vast quantities of wood. One can only be thankful that chain saws had not yet been invented!

pine forests along the entire west shore of Lake Michigan that escaped the saw and remains essentially an old-growth forest today. The reason that Toft Point has such a fine stand of White and Red Pines is directly related to the fact that the area was burned completely over 300 to 400 years ago with a low intensity fire, perhaps started by lightning or by the Native Americans. A forest of pines requires a burned-over landscape to begin growing and become established.

Where else can one go today to experience an old-growth forest? One of the finest in the Midwest is the Sylvania Wilderness of the Upper Peninsula of Michigan. Another excellent site is the Cathedral of Pines located three miles southwest of Lakewood, Wisconsin. This is one of the few remaining stands of old-growth pine in Wisconsin. It’s a 20-acre parcel in the Chequamegon-Nicolet National Forest with pine trees ranging from 200 to 400 years old. The state chapter of The Nature Conservancy purchased a beautiful tract of old-growth woods known as Jung’s Woods about seven miles west of Shawano. One of North America’s very finest old-growth forests, supporting enormous Sitka Spruces, Western Hemlocks, Douglas Firs and other trees, which we were privileged to see, is the Hoh Rain Forest in Olympic National Park in Washington State. Visit this world-famous area if you can. 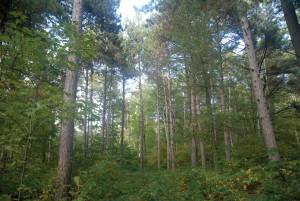 A classic research project was undertaken years ago at what today is the Indiana Dunes National Lakeshore, to illustrate plant succession from sand dune to climax forest – a forest which, under natural and ideal conditions, theoretically will continue to regenerate itself for hundreds of years. Today you can see this fascinating process, first-hand, at Whitefish Dunes State Park. Even though logging was done there many years ago, one can nevertheless see many fine trees along with a healthy understory of plants.

Forests in Door County which were logged many years ago, but where a considerable number of trees were also allowed to go uncut, are slowly but very nicely returning to being old-growth forests. One excellent example is Ellison Bluff County Park, one of the premium state natural areas, where a beautiful and fairly long but easily-hiked, handicapped-accessible loop trail has been established. Check out other county parks and also Door County Land Trust sites, such as Lautenbach’s Woods, which have been permanently preserved. Rock Island State Park also boasts an old-growth forest.

One of the ongoing problems which becomes worse in severity each year is that of invasive pests, plants 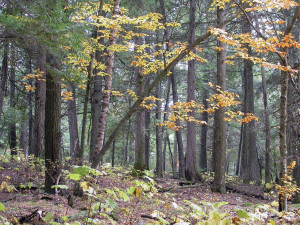 and insects being brought into the forests mainly by people, but also by wildlife. Several of the most threatening are Garlic Mustard, Buckthorn, Autumn Olive, various exotic honeysuckles, Forget-Me-Not, and Hound’s Tongue. All are capable of eliminating the growth of native plants, upsetting natural plant succession and greatly reducing biodiversity. In the case of perhaps the worst plant of all, Garlic Mustard, not even native seedling trees can grow within dense stands of this alien invasive. Add to this short list of invasives the dreaded Emerald Ash Borer, which seriously threatens millions of ash trees of all species in the state, and you should easily sense the glaring need for people to act accordingly to help.

Many of our state parks, various private organizations such as The Ridges Sanctuary, and state natural areas including Toft Point have established active friends groups which have been helping considerably to keep these valuable areas as wild and natural as possible. Numerous second-growth forests, old-growth forests in the making, will be enjoyed by countless people in generations to come. It is our responsibility to ensure that this will happen. Please help if you can!