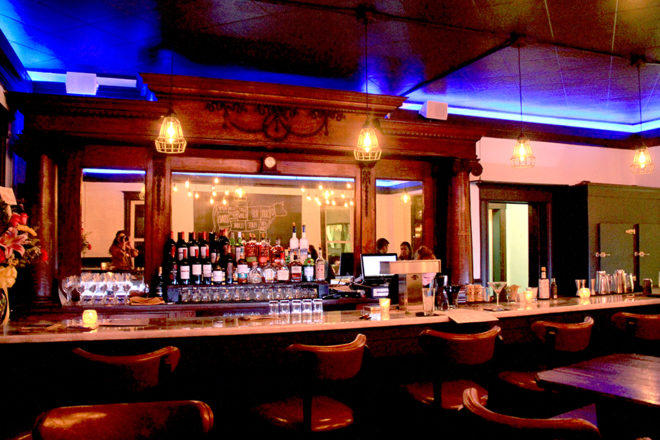 Patsy and Jody Wuollett – owners of LURE, CHOP and Pasta Vino – have expanded their restaurant roster to Southern Door with the launch of the Old Post Pub on May 22. The historic building has stood in the town of Maplewood since 1905, when it opened as the Anton Schleis Hotel and later (roughly 1933 to 1953) was the Maplewood Post Office. Most recently, it was Richard’s Pub & Grill.

With the change of ownership and the help of Countrywide Construction, the space underwent a six-week remodel that now blends original and new design elements. The set of Maplewood post boxes from 1935 that are on display behind the host station inspired the name.

“Stained-glass windows are original, and the other design elements were created by Patsy Wuollett and Nicole Rabach Design,” Jody Wuollett said. “Our son Ryan Lapolla did the table and bar tops with an epoxy technique he’s been using now for several years.”

One of the first things to catch my eye was the dramatic, wooden back bar, which is thought to be original. “The style suggests Brunswick may have been the manufacturer, but we’re not sure,” Wuollett said.

An elegant bar area with high-tops, a long bar top with seating, and booth seating near the exterior walls greet guests when they enter. The center room has more intimate seating, and the back dining rooms have a great section for group dining. The bar and dining spaces can seat 75 patrons total.

On the evening of the soft opening, elegant jazz music filled the air, and soft lighting encouraged visitors to relax and stay awhile. The new table tops use hypnotizing swirls of grey, white and brown tones, and the chairs and booth seating evoke a mid-century modern feel.

Perusing the drink menu, you’ll see the expected cocktails for a Wisconsin supper club: Old Fashioned, Manhattan and Mule, plus a few outside the box, such as the Blood Orange Paloma and the pineapple martini. Beer options include several brews from nearby Ahnapee Brewery and an array of domestics. Red and white wine are offered by the glass and bottle.

If you’ve dined at CHOP, you’ll recognize some menu favorites here as well. The pork, beef and lamb options are a main attraction, along with compound butters. Each cut comes with the chef’s choice of potato and a salad or soup.

“As we plan to be open year-round,” Wuollett said, “we’ve designed and priced the menu to attract both locals and visitors alike. Drink prices haven’t increased since it was Richard’s, and we plan to continue to offer great value as we go forward.”

While I pondered what I was craving, I put in orders for pot stickers and bacon-wrapped scallops. Each table receives a basket of complimentary cornbread fritters with maple syrup for dipping. They’re fried and sweet – a welcome change from the standard bread basket.

For the main, I went with a two-piece lamb chop order, served with mint jelly and red cabbage. The thick cuts were charred just enough and perfectly tender. For my next visit, I have my eye on the farmhouse pork chop or pork schnitzel, per Wuollett’s recommendation. Or, if that next visit happens to fall on a Friday, I could try the classic fish fry.

The Old Post Pub is currently open Tuesday through Saturday, serving dinner at 5 pm, and plans are in the works for an early-dining feature. Groups of six or more may call the restaurant at 920.856.6966 to make a reservation.