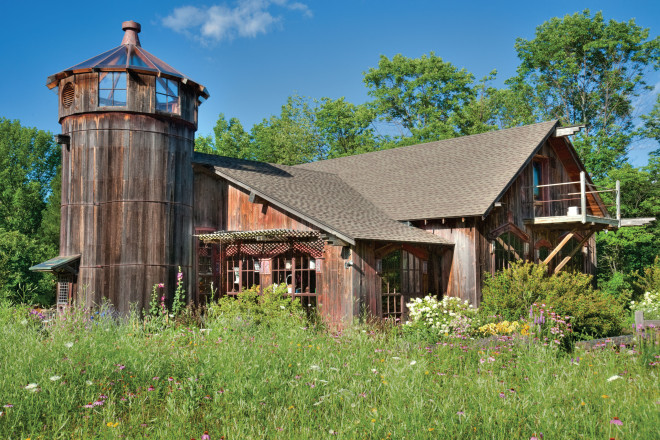 As anyone who has ever undertaken a major construction or remodeling project knows, there are an infinite number of decisions to be made about the materials used. For some, those choices are guided by a desire to avoid using new materials when old will do, whether those old materials are already present in your home or scavenged from elsewhere. The choice to use old materials may also be due to aesthetic considerations, as old materials may be more in keeping with the desired look, even for a new building. 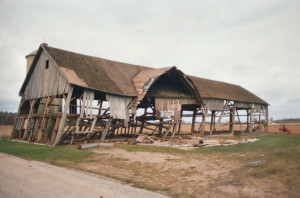 When I bought my house in Baileys Harbor, nothing about it, interior or exterior, provided any clue it is one of the oldest houses in town. The exterior siding was vinyl. The floors were covered in carpet, or, in some rooms, four layers of worn-out linoleum. The doors were hollow-core faux wood. The interior paneling and trim were 1970s vintage.

Since learning that my house was actually very old – and that its “twin” two blocks away still has all the old wood trim, doors, etc. – I’ve been obsessed with authentically restoring it. (Eventually. I have to confess most of the doors and trim present when I purchased the house are still there.) My husband and I had the carpet and linoleum downstairs ripped out and refinished the old wooden floors underneath, clearly authentic due to the hodge-podge effect of the different woods used in different areas and the unevenness and separations which come from an old house settling over many decades.

Then, last year, as part of a remodel of our porch – added to the house in modern times, though in more need of overhaul than the rest of the house – we were lucky enough to obtain old barn beams to create the wide doorway we’d always wanted between the porch and main part of the house. The visual effect of the cleaned-up but still beat-up beams is so in keeping with an old farmhouse that many people ask if the beams were uncovered as part of the removal of the wall. 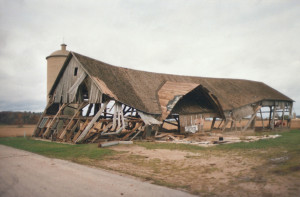 We acquired the beams through our contractor and friend Bryon Smith, owner of Ravenswood Builders, who had in turn acquired the beams from local builder Russ Cockburn. Russ is owner of Russ Cockburn Construction, which he established about 25 years ago. He notes, though, that he has “been in the building profession since I was eight years old, so I’ve really been in the business about 45 years. My father was a builder and he felt my brother and I ought to have a job on the weekends, so he just put us to work even though we weren’t necessarily any good at it.”

Before moving to Door County in about 1994, Russ lived in Idaho and Arizona. He says, “When I moved to Door County and started to experience some of the barns here, they really interested me, especially since many of the old barns you see are falling down. Reusing barn beams isn’t something I could do in Idaho and Arizona as there just aren’t old buildings like there are here.” He recalls that the first barn salvage project he conducted was on “a barn over near Valmy that Habitat for Humanity actually owned that they wanted to get rid of. I was working on a project at the same time for Jim and Carole Maronek in Ellison Bay, and so we got some people together and took this barn apart and salvaged all kinds of stuff to use on their property.”

Russ has salvaged wood from five barns – all in Door County – and has also acquired “small quantities of stuff from people who just gave it to me because they didn’t want to store it any more. I’ve also 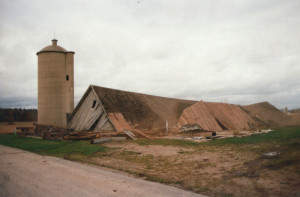 salvaged a little bit out of some other smaller house tear-down projects, but it’s just difficult to get much material that’s useful, because things like the studs and rafters don’t work to re-use with our modern construction – old two-by-fours aren’t the same size as modern two-by-fours! – and a lot of times stuff just isn’t in very good shape. With the barns and larger buildings like that, there are substantial, big pieces of wood to salvage.”

During the actual deconstruction, Russ explains, “I usually peel off the siding and salvage that as much as is reasonable, and then I pull the barn over. A lot of these buildings already have structural problems and it isn’t safe or worthwhile to disassemble them piece by piece. You get a certain amount of damage with this method, but it’s safe, and you still get a lot of good material. No one is really interested in reassembling these buildings – people are tearing these barns down because they’ve got problems.” He goes on to reiterate that “the structure of some of these old barns as far as engineering goes is a little sketchy. I’ve looked at some barns which I’ve decided not to take on because I didn’t feel like there was enough material to make it worth my while.” Russ explains that in all his barn salvage projects to date “the barns have been free – I usually tear the whole thing down and remove it without charge to the property owner, but I get to keep all the materials.” 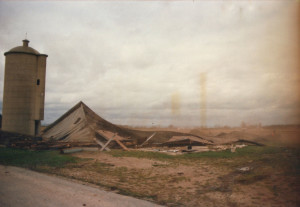 Russ says that his favorite way to use materials salvaged from barns is “as accent pieces in the projects that I build. The Maroneks’ barn is a little different, because the entire thing is made out of salvaged wood. I just love the character of the wood, so I like to use it in places where it will continue to be exposed. I’m using it differently than it was used before, like in your doorway, or as posts, beams, or mantels. I like to play around with the wood a little and do some interesting joinery with it, but still explore the character of it. Some of the pieces of wood have so much labor put into them when they were building these barns, and it’s not the kind of work that they do any more – the way they notched the beams and put in the rafters, the hand-hewing, etc. – so I think it’s really interesting to come up with uses for the wood where you can see that old work.”

Jim Maronek explains that he and Carole actually have four buildings on their property which have used salvaged wood:  the barn constructed by Russ; a cottage that was constructed to replace a cottage that burned down, for which pieces from an old barn were used both for structural elements and “dressing”; a garage building which also houses a study; and the house. Carole says that the cottage was constructed “by Jim Grasse and his partners of Ellison Bay Construction, who had never done anything quite like this before they worked on our project. They had a lot of fun, though, and they did a great job.” With regard to their house, Jim notes, “The log portion of our home was one of the first buildings in Door 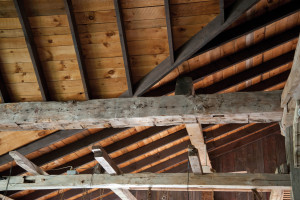 County. It was a logging company office; then around 1900 became a farm, so a kitchen was added; and then was expanded further in the 1930s. We love old buildings, and as we built or remodeled structures we just kept employing salvaged wood, with the vast majority of that wood being from Door County.”

Carole concludes by saying, “It’s just so wonderful to protect the historic value of these items – they don’t make things like that anymore. Sometimes the old pieces are harder to use – they’re not as streamlined, they may have splinters – but it’s wonderful to be able look at something from history and have it as part of your house and daily life. We’ve been doing this for years; people were always bringing us old things that other people were about to throw away. I just think it’s so much fun.”

Tom Birmingham, owner and founder of local construction company Great Northern Construction, Inc., agrees, saying, “I guess we’ve been reusing wood all along, before we really knew we were doing it! It’s a lot of fun, a real treat, when owners decide to re-use old materials. It’s usually a lot more expensive material-wise than buying new, but we encourage people to do it because the wood itself is not only old but rich in character and beautiful in quality. And, not only is it a lot of fun, there is a lot of pride involved in the work.” 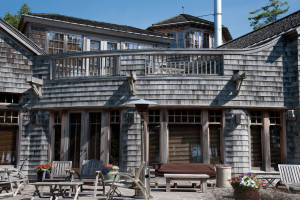 Nowadays, Tom notes, “Flooring is the most common material that people buy that’s made of re-used wood. It’s rich looking, and adds a nice warm touch to their houses. The new Cookery Restaurant building [though not constructed by Great Northern] is all reclaimed wood flooring, which they chose for environmental reasons. Allen and Amy Musikantow also chose re-claimed hard pine flooring throughout most of their house. The flooring is largely made from reclaimed factory beams – old warehouses across the country are dismantled and the beams are sawed into flooring. Carlisle is the name of the company that does most of the warehouse wood reclaiming work across the country.”

Tom explains that the Musikantows’ home in Liberty Grove was probably the first time Great Northern consciously and purposefully used reclaimed wood for a significant project. He says, “The architect for the house specified that he wanted ‘sinker cypress’ used for the project. The sinker cypress was from the Mississippi River, or estuaries off of it, and sunk in probably the 1800s on its way to the mill. It’s similar to the pine logs that sank in Lake Superior that are now being dredged and hauled up to re-use – the 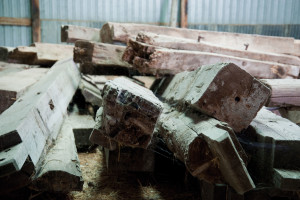 wood is quite expensive, but it’s very beautiful.” Tom goes on to further explain, “The Musikantow house architect specified he wanted the sinker cypress because he knew it was available, and it had a very small number of growth rings per inch, so it would be very stable and very rot resistant. The cypress was used for the window frames, the doors, and all the exterior moldings and faceboards – basically, the whole exterior of the house is sinker cypress, with cedar shingles.”

There are many other homeowners and builders in Door County re-using wood in construction or remodeling projects. Whether they choose to do so for environmental, aesthetic, historic, or qualitative reasons varies, but everyone I’ve talked to seems to agree on the end result:  beautiful.