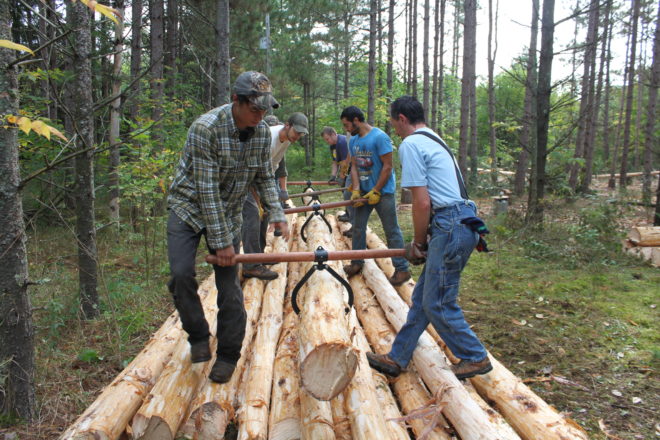 Last week, in the otherwise quiet woods on Beach Road north of Sister Bay, you could hear the occasional thunk of an axe striking wood. If you slowed down, you might have seen a group of 25 men hauling smooth-skinned logs through the trees using nothing but rusty clamps with wooden grips.

“It makes it kind of nice in here with the bark on the ground,” said Pastor Dan Wolgast, walking over piles of bark shavings covering the forest floor. “Some men will be chopping the branches off, others will be sawing it to length and the majority of them will be peeling it. Now they’re stacking the logs up here getting ready to put them on the truck. That’s the order of things.”

The project is in pursuit of a new cabin at Northern Grace Youth Camp on Berry Lake near Shawano. A group of 25 men in a ministry with Wolgast cut, skinned and hauled 150 logs out of the northern Door County woods using nothing but hand tools.

“So many guys never had that opportunity, they don’t know what it feels like to work with their hands and accomplish things. It’s been really good and we wanted a challenge and they’ve really gotten a challenge,” said Wolgast.

Although most are from Wisconsin, these temporary lumberjacks came from as far as England and Brazil with backgrounds in everything from farming to therapy. The original idea to build a log cabin at the camp gave rise to a seemingly impossible alignment of opportunities to make it possible. 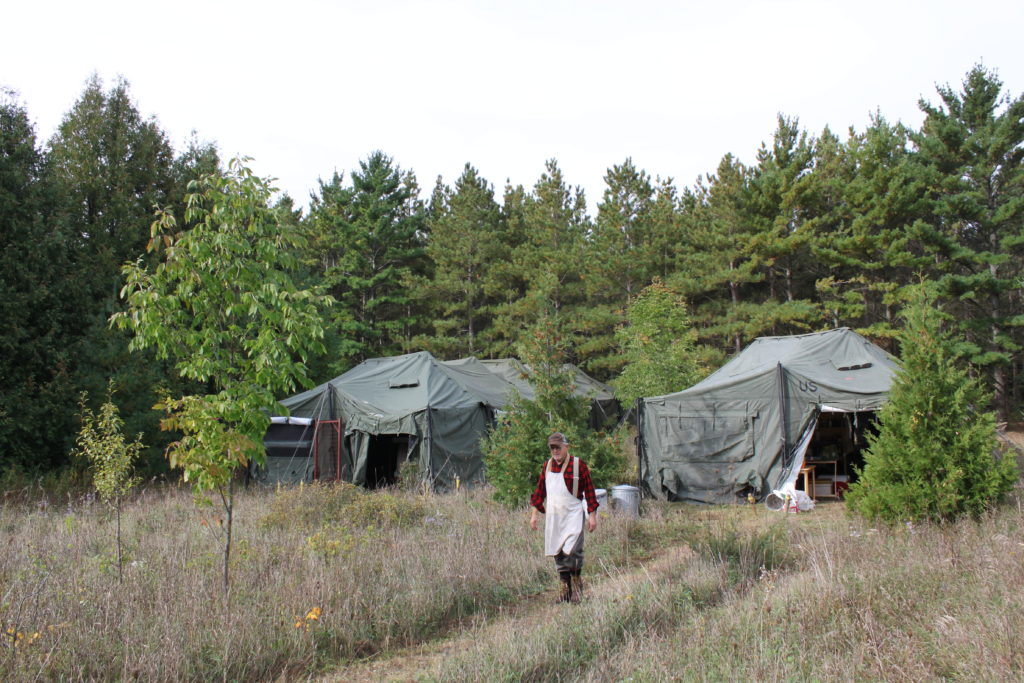 Wolgast walks through two used military tents, one for sleeping and the other for eating.

“We found them online down in North Carolina and our main boss lived within a half-hour of them. He just happened to have a pickup that could haul them because they weigh over a ton,” said Wolgast.

The group got bunks from a bible camp and the mattresses loaned for the weeklong project.

Perhaps the most serendipitous opportunity was Doug Cox, a seasonal resident on Beach Road, learning of the project and thinking of his own six acres that is littered with dying pine trees.

In 1972, the Seaquist family planted hundreds of pine trees on the lot after a condominium developer decided not to build on the old orchard land. Cox bought the property in 1974 and in the past few years, he watched his pine trees dying.

“Too many trees were planted,” he explained. “They started dying so we took out about 1,800 and then they’re still dying. So I had the [Department of Natural Resources] forester come up last year and I worked with him.”

The DNR gave Cox permission to take out more trees right around the time Wolgast was searching for the logs that would become a cabin at the youth camp. They will take 150 logs from Cox’s property and move them to the camp at Berry Lake. Next year, they will meet again to build the cabin in the same primitive way.

“Next year we’ll be finding the wood we want to use for shingles and the guys will actually be making the shingles by hand,” said Wolgast. “The object is just to have the men be able to work with their hands and say that they’ve accomplished something.”

The living conditions were only slightly less primitive than the work. Propane and porta-potties were luxuries in the otherwise simplified standard of living. 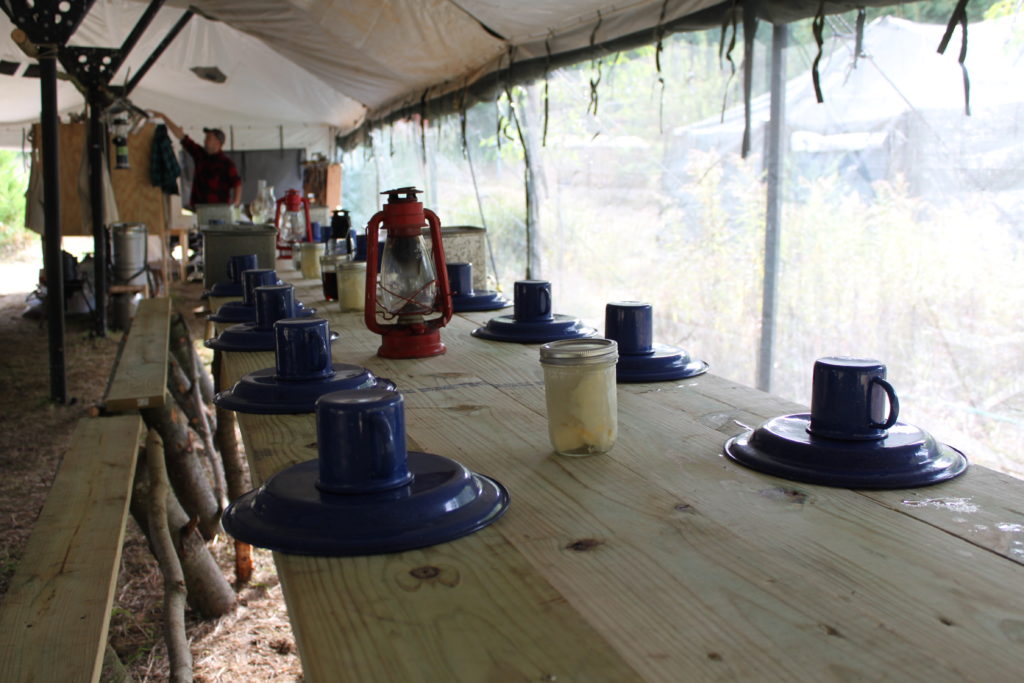 Kerosene lanterns lit the long dining table and morning coffee was not much more than coffee grounds strained through a cloth. Everyone washed up in a white bowl with some cold water that runs into a hole in the ground.

“The men were disappointed because it took us a while to get the coffee figured out right,” said Wolgast, laughing. “It’s a beautiful ambiance with all the kerosene lamps lit along the table and it’s usually always dark when we eat supper and breakfast.”

Even the maintenance of the tools is done like old times. Larry, a blacksmith from Chetek, Wis., sharpens axes and makes wedges on a small bench next to the dining table. Next year, he will make the door hinges and hardware used in the cabin as well. 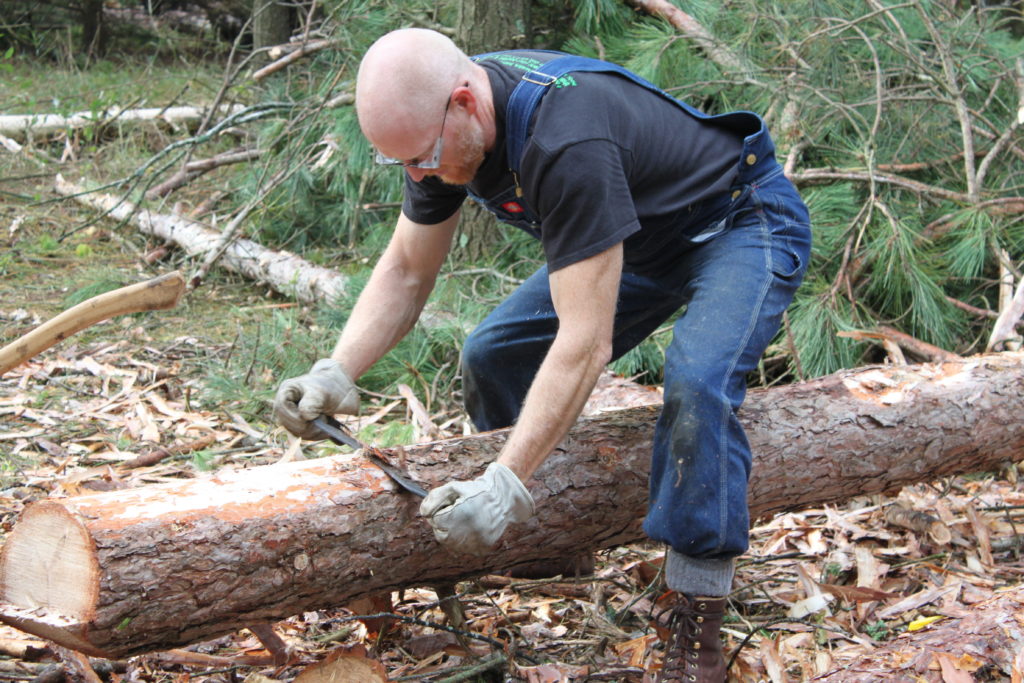 Never having done something like this as a ministry, Wolgast found himself surprised not only with how smoothly the work moved along, but also in the relationship between these young men who are otherwise strangers.

“A number of the men have had to quit for one reason or another, but none of them wanted to,” said Wolgast.

“I’ve worked in the construction business for the last 20 years and there’s always a slacker,” said the foreman of the project, watching the group haul another log into the pile awaiting the loading truck. “We haven’t had one here and these guys aren’t even being paid. That’s the biggest impression that I’ve gotten out of this is the willingness to work so hard. I’d hire any one of them on the spot.”

Wolgast’s dream of building a log cabin and his appreciation of the work to build one goes back to a trip he took to northern Minnesota with his wife.

“A few years ago, my wife and I visited a log camp up in northern Minnesota,” said Wolgast. “A man had worked in a log camp as a kid and the jacks there encouraged him to get out of there, go on to school and he did. He was always grateful for that. So when he retired, he actually built an exact replica of the log camp that he worked in and our building is designed after that.

“We’ll probably have a number of men that want to be here so I think next year especially will fill up a lot faster,” said Wolgast. “Most of these men are going to be back.”