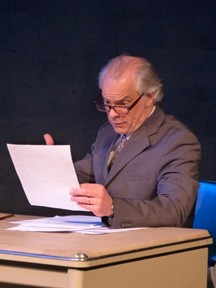 Oleanna has electrifying dialogue, blazing emotion and an ending that will leave you talking for weeks. In this riveting drama, a college professor and his female student become embroiled in a war of words that takes a dangerous turn. As their serene campus transforms into a battleground for justice, Mamet’s explosive masterpiece dares you to take a side.

Talk backs with the cast and director will immediately follow each performance. Performances will take place through March 29 on Thursday, Friday and Saturday at 7:30 pm and Sunday matinees at 2 pm. Tickets are available by phone or at the box office beginning at 5 pm the day of the performance. The performance contains strong language and adult situations. Children under 14 are not admitted.