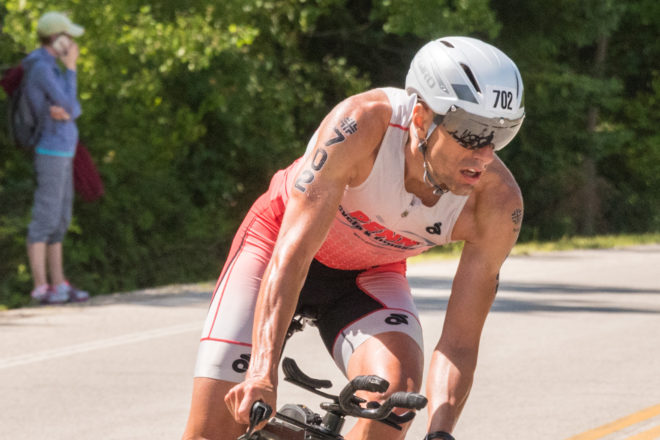 After a 90-minute delay due to severe weather, the Door County Half Iron Triathlon began at 9:30 am on Sunday, July 17. The swim course was shortened to one-third of a mile due to the weather but the bike and run portions went ahead as planned.

Adam Olson of Boulder, Colo. took first place overall with a time of 3:44:53. Jessica Jacobs of Yelm, Wash. finished first place in the women’s division with a time of 4:09:59. Michael Piche of New Glarus, Wisc. and Dustin Leutenegger from Monroe, Wisc. took second and third place for the men, respectively. Ami Hutchinson from Minneapolis and Erin Feldhausen of Madison rounded out the women’s podium.

The Door County Triathlon is the second largest athletic event in Door County, drawing more than 2,300 athletes to the peninsula each July (only the Door County Half Marathon and Nicolet Bay 5k features more participants). For 12 years, the event has drawn competitors from across the country to Murphy Park in Egg Harbor to compete in the sprint distance Saturday, and the half iron distance Sunday (1.2-mile swim, 56-mile bike, and 13.1- mile run).