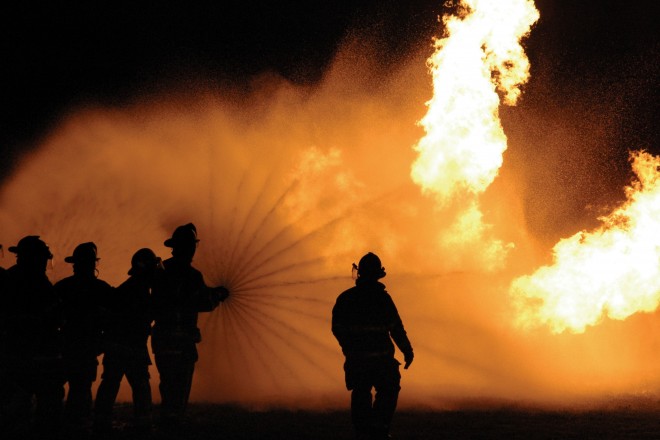 “When you’re entering atmospheres that are in excess of 1,000 degrees, you’re living life on the edge,” Caleb Whitney says wryly about his job as a firefighter and company officer for the Baileys Harbor Fire Department. Indeed, the firefighters of northern Door County live on many “edges” simultaneously, straddling the lines between fire and water, firefighter and civilian, safety and danger, on an almost daily basis. Though Door County fire departments must meet the same professional standards as any U.S. fire department, fighting fire on the peninsula is in many ways a one-of-a-kind experience, made unique by the geographic and cultural fabric of Door County life.

Though relatively few people live in Door County year round, in the summer the county’s population blossoms to that of a small city. The unusual characteristics of this population – both its seasonal fluctuation and its extension across a long peninsula – require a relatively large number of fire departments to cover the area adequately. As a result, northern Door County (from Carlsville all the way north to Washington Island) is currently served by seven separate fire departments. While the Sturgeon Bay department has a full-time, salaried firefighting force, Northern Door firefighters are “paid-on-call” – in other words, they are paid strictly for the time they spend responding to calls.

Denise Bremer, a member of the Sister Bay/Liberty Grove Fire Department, explains the paid-on-call system this way:  “We live our own lives. But when our pager goes off, if we’re available, we go.” Northern Door firefighters receive calls about once every two or three days; Sister Bay/Liberty Grove fire chief Chris Hecht reports that his department receives 90 to 100 fire calls a year. Not all firefighters respond to every call; Caleb Whitney calls “a 60 to 75 percent response – well, great” for his Baileys Harbor department.

To the time that they spend responding to these calls, firefighters add 60 hours of initial training, one to two training meetings each month, plus a week of fire prevention work and any extra training they elect to undergo. Though none of these firefighters are strictly volunteer (“no one can afford to do volunteer anymore,” Whitney notes), most forego family time and wages at higher-paying full-time jobs in order to fight fires. “It really is a serious commitment,” Whitney says. “You don’t do it because you’re making money at it.”

material spills, answering 911 calls when the dispatch system goes down, and even babysitting when schools close early. Though state agencies are technically responsible for many of these duties, they are often slow to arrive due to Door County’s remote location. Whitney states, “We are many hours away from help – how do you get to a peninsula?” Because state agencies may not arrive for six to eight hours, he continues, “you gotta do what you gotta do until they get there.”

Even on ordinary fire calls, Door County’s internal geography poses extraordinary challenges to its firefighters. So much of Door County is wilderness – over 50 percent of Baileys Harbor, for example, qualifies as wild property – that Door County firefighters must occasionally act as wild-land firefighters and perform off-road rescues. Moreover, the county’s high, rocky bluffs mean that firefighters are often working on an incline, or that ever-necessary water is difficult to reach, even when a burning structure is seemingly close to the shoreline. And the long, skinny shape of the peninsula (combined with the fact that firefighters must transport themselves first to the fire station before setting out to answer the call) means that response times are unavoidably slower than they might be in a suburban or urban area.

Door County’s seasonally fluctuating population further complicates the job of the county’s firefighters. Many of the county’s most valuable properties are inhabited only part time, rendering them susceptible to fire hazards or even false fire alarms. Summer residents often choose not to plow their driveways in the winter, making it difficult for fire trucks to reach the site of a fire.

Hecht also notes that the demographics of northern Door County can make it difficult to find enough firefighters to round out its fire departments:  “Sister Bay had the distinction at the last census of being the oldest [in terms of age of its residents] community in the state. So we provide service to an elderly population, and our ability to recruit and retain is limited by there not being a lot of young people.” Retention is not usually a problem among permanent residents, but lately, says Bremer, “we have lost a lot of younger people. They join and then they move away because they can’t afford to stick around.” In a few years, she says, “it’s going to become a huge issue. We’re losing people from the age group and generation that we need to get in there.”

An equally great challenge for Door County firefighters is its lack of available water – an ironic problem given the peninsula’s seemingly abundant water supply. Most of northern Door County is not “hydranted,” which means that firefighters must bring water with them. Given that the fight against a raging structure fire often requires two or three tanker trucks per minute, this need for water can quickly become desperate.

Working individually, most fire departments in Northern Door would find it difficult to cope with these formidable, diverse challenges. However, for calls in which a single department’s force is deemed insufficient (most structure fires, for example, or the explosion that rocked downtown Ellison Bay in 2006), the fire departments of Northern Door rely on a written agreement of collaboration called Mutual Aid. Chris Hecht describes the system as a way “to share resources. Any firefighter can request additional help if he or she needs it.”

Hecht summarizes the tangible benefit of Mutual Aid this way:  “Mutual Aid doesn’t allow [one department] not to have resources, but it allows you not to duplicate resources.” The Sister Bay/Liberty Grove department, for instance, houses and maintains a truck called an “air wagon” (a utility truck carrying assorted rescue equipment and air to refill firefighters’ portable air tanks), as well as the longest hose truck in the county. In difficult fire situations, the department sends this cutting-edge equipment to augment the firefighting effort. Similarly, the Egg Harbor Fire Department sends its superior ladder truck out to calls that might need an especially long ladder. All departments bring their available tankers to a structure fire; Bremer says:  “Our responsibility to Mutual Aid is water first, and if you need additional manpower, you call that, too.”

Northern Door fire departments collaborate not only on calls, but also in many of their training sessions. This tactic conserves resources, preventing departments from planning seven individual meetings about the same topic, and builds a sense of camaraderie between departments that is rare outside of Door County. When firefighters from other parts of the country visit Door County, Whitney says, “they are absolutely blown away by the level of department cooperation.” Hecht agrees:  “We really have developed strong relationships with our neighbors.”

This rapport is often vital in emergency situations, when it’s important for firefighters to know one another’s skills and limits. Whereas most full-time departments have a consistent structure, in which each firefighter is assigned to a set task, Whitney notes that “in the rural fire service, there is no structure. You build a structure for every call because you don’t know who’s going to come. You don’t know who you’re going to be standing next to.” Through Mutual Aid, firefighters are more likely to know their coworkers in advance, improving the efficiency of their work.

Door County’s relatively small population allows these interpersonal relationships to flourish even more effectively, not only within the fire department but also between firefighters and the people they help. For instance, having a fire department made up of people who spend their non-firefighting lives working as contractors – builders, electricians, plumbers – means that many firefighters have an intimate working knowledge of the buildings in which these fires occur, offering them a distinct advantage in fighting the fire. Bremer says, “We’ll get into a house and someone will say, ‘Well, I know the inside of the house. I know where the propane tank is.’ In a full-time department, you don’t often get that because they’re full-time firefighters.”

This type of inside knowledge often extends even further, beyond the professional and into the personal realm. In such a small community, firefighters often know the people whose property or lives they’re working to save. Bremer continues, “You hear that pager go off in the middle of the night in winter, and you know it’s a local. Might be somebody you know.” Such personal intimacy is undeniably difficult to face on a regular basis, but Bremer classifies it as an advantage rather than a disadvantage:  “It’s not a problem – it’s almost to a point of benefit. Because you just want to hug them.”

The close ties that form between fire departments and the communities they serve are, by all accounts, mutually beneficial. In much the same way that Door County communities rely on the fire service for their safety, fire departments rely on communities for funding, staffing, and support. Fire departments are supported in part by local tax bases – tax bases that, given Door County’s high property values, go a long way toward funding high-quality, cutting-edge equipment. Further support, financial and otherwise, comes from the community through fundraisers such as Marina Fest (run in large part by the Sister Bay/Liberty Grove department) and other outreach events. Chris Hecht expresses immense gratitude toward the Northern Door community for its support:  “We have excellent equipment, fantastic people, and we couldn’t have that without the support of the people in this community.”

In turn, Northern Door firefighters hold an extremely high regard for and dedication to their work. Most cite a desire to contribute to the community as one of their primary motivations for becoming involved with the fire service. “Unfortunately, it’s in a person’s worst time that we’re there,” Bremer says. “But we get to help out. It’s what we love to do.”

A firefighter’s “life on the edge,” especially in northern Door County, is often fraught with stress and risk, but it is a life that many firefighters say they would not give up given the chance. Caleb Whitney reflects:  “I am so fire service proud – some of the greatest people, some of the greatest things you can do as a community member. It is a huge commitment, and it can come at a great cost, but it can be an amazing experience.”