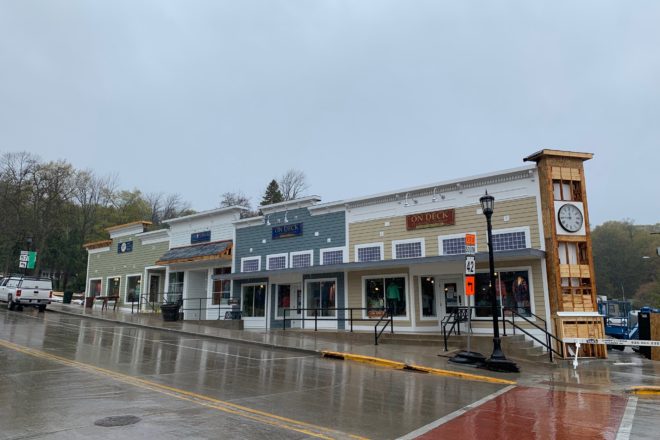 The refacing of On Deck is nearly complete. The new look is a nod to the original buildings of Sister Bay, including the original Bunda’s store that stood on the corner at the turn of the last century. Photo by Myles Dannhausen Jr.

When thousands of Memorial Day visitors round the bend and head down the hill into Sister Bay this weekend, a fresh look at On Deck Clothing Company will welcome them.

The building now has the look of four distinct storefronts with varying colors and rooflines, but it’s still home to just On Deck. The facelift is a nod to the past by owner Mitch Larson, whose roots on the corner go back to 1888, when great-grandparents Wenzel and Mary Bunda opened the Bunda Store on the corner of Highway 42 and Maple Road.

Though the work completed by Van’s Lumber and Custom Builders took place this winter and spring, the genesis of the idea goes back more than a decade. In the early 2000s, three different retail stores had failed in the space – and then came the Great Recession. It seemed the building was a lost cause, but Larson, lured by both opportunity and nostalgia, bought the building when it failed to move at auction.

The village was struggling to find a collective identity at the time, stumbling through the transition from blue-collar town to tourism centerpiece. Larson took a new look at some old photos of Sister Bay from around the turn of the 19th century and saw an opportunity in the frontier-style storefronts, including the one once owned by his great-grandmother.

“This is a town of small shops, and I always wanted this to look like several small shops,” he said. But the timing wasn’t right. Larson made smaller upgrades, decked out window displays and added large flower pots, but the big vision had to wait.

Even this year, Larson certainly didn’t need to remodel. The Sister Bay location is one of the most successful of his nine storefronts, and the village is riding a wave of popularity that began when a major highway reconstruction was completed in 2016. But that success, Larson said, is precisely why he felt he had to finally turn his vision for the property into reality.

“What has happened to this town is huge,” he said. “This is a cool place to shop, to eat. We need to be part of it. This is my hometown; this is where I grew up. I feel passionate about what I leave behind.”

Larson said the building has long lacked curb appeal. He has seen what that can do for sales at his locations in Fish Creek and Sturgeon Bay, where nods to historical architectural styles have helped make his stores year-round destinations and centerpieces of community identity.

“I think what we did in Fish Creek has made a difference to our business, and I think this will, too,” he said. “I want to replicate what this town looked like 100 years ago.”

He traces his inspiration for creating unique retail environments to a visit to a shop in Florida where a vintage seaplane hung from the ceiling. After that, he said he knew he wanted to make a statement with his stores. In Door County it isn’t a plane, but vintage Chris-Craft boats that make their mark, and he said he’s trying to figure out how to get one into his Sister Bay store as well.

Larson is making plans for a grand reopening celebration in June, but the store is open now.

Across from the marina, it’s much more than a facelift that has caused a stir in the village. The Marina View condominium development will open by the end of June, according to co-owner Chris Schmelz. The 12-unit complex built by De Pere-based Smet Construction includes four units designated for rental and eight for condominium use.

Its design is already receiving mixed reviews. Detractors are turned off by its height, which rises three stories straight up from its perch set back slightly from Highway 42. Its bright, white exterior and location right on the bend on the north end of the village make that height even more pronounced, but it fits with the long-term plan developed by village officials, focus groups and residents during more than 32 public meetings spanning five years after the village took the first steps to open the waterfront to the public in 2007.

Meanwhile, the controversial Hotel Dörr project remains stuck in limbo. Schmelz said he’s pushing forward on the project, but he’s been waylaid by rising construction costs. In December, he won concessions from the Village of Sister Bay to convert four first-floor units into lodging. Schmelz will meet with the village board in June to discuss the future of the project.

Two more rental projects will be open this summer: the Goose & Twigs hotel and cafe on Mill Road opened in April, and next door, Mill Road Place – a four-unit complex built for the vacation-rental market – is nearing completion as well.

There is some sour news for the village in 2019: Shopko is expected to close its doors in late June, and village President Dave Lienau said he doesn’t expect anything to take its place in the short term.

“Shopko’s lease runs through the end of the year,” he said. “And you can’t just recruit someone to fill the space. It’s a private space owned by the Krist family.”

Lienau said he doesn’t expect anything to happen with the property for at least a year.

Bier Zot, a popular gastro-pub, has closed to make way for more seating and waiting-room space for the always-busy Wild Tomato. Owner Britt Unkefer said he hopes to find a new location for Bier Zot in 2021.

Finally, work on the Piggly Wiggly expansion is nearing completion. The grocery store – long ridiculed for its narrow aisles and cramped checkout lanes – has undergone a dramatic remodel and expansion project this winter.

The renovated store features wider aisles, a vastly expanded deli, a frozen-foods section and produce section, and a much larger beer and wine selection. Best of all, there’s now room to navigate the checkout lanes without a police escort.