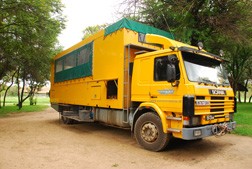 Writer Brittany Jordt packed into this vehicle with a number of fellow backpackers from around the world to explore Africa. Photo by Colin Frater.

We finally found a restaurant selling chicken, rice, beans, and chips. Just as we tucked into some beans and chips, thunder clapped and it began to pour. The corrugated steel roof echoed loudly. In a momentary break in the rain, the large African woman appeared in the doorway in pursuit of her bottle.

“That was some pretty bad chicken,” Dave said. “Stringy. Not much meat. Like it dropped dead after running a marathon.”

We drove for a long time looking for a good place to bush camp that night. Every little road we explored off the highway seemed to lead to a village. Finally, I pushed for a pee stop because the reconnaissance was taking too long. As it turned out, the place Dave pulled over was a pretty good camp spot, and was affectionately dubbed “Britt’s Bush Camp.”

Ishy came onto the back of the truck and gave us her usual spiel: “Okay guys, let’s set up the kitchen first, then tents. We should put the tarp up over the kitchen just in case it rains tonight, and someone should dig a hole for a fire pit.”

“Is there Wi-Fi here?” someone joked.

“What about a pool?”

“Yeah, the Wi-Fi code is This is Africa,” Ishy replied.

She pushed her glasses up her nose with the palm of her hand and tucked back a rogue piece of wavy blonde hair. On the inside of one wrist she has a dragonfly tattoo, and on the other, three stars. She tucked her iPhone into the back pocket of her cut off, frayed jean shorts.

In a previous life, Ishy got a degree in law that she didn’t use. Instead, she worked on scripts for cartoons and movies. Three months ago, she was a passenger on the back of an Oasis truck. Her friend, the trip leader at the time, encouraged her to apply. She did, and they hired her right away; where upon she left the back of the truck, jumped into the cab, and began training. Ishy was frank with us when we met: this was her first trip, and she knew she had a lot to learn. With the back of the truck seating at maximum capacity, it was a trial by fire.

A long, thin folding table attached to the outside of the truck, over which hung a light. Another bigger folding table went up and out came the stove, gas, pots and pans. We took our tent out, which we identified by its name, ‘Already,’ and scouted out a good spot away from the others. Alone time was hard to come by when traveling with 24 other people, and we took every opportunity.

Meals were cooked in groups of three, and Ishy handed out the budgeted funds to the cook group, who did the shopping. At the beginning of the trip, we had access to a lot of outdoor markets and quickly adapted to haggling for our vegetables. Most other overland companies operating in Africa are more expensive than Oasis, and so their drivers or trip leaders do all the cooking. Ishy informed us that one of these groups was jealous of us – they thought we had more of an opportunity to interact with the locals by doing our own shopping.

For the most part, I enjoyed cooking. You had to be resourceful, often changing your menu when you arrived at the market and found they didn’t have a crucial ingredient. We got to know each other this way: haggling over onions or inspecting tomatoes, chopping up a pumpkin or squash for a curry, and trying to make three kilograms of rice fluffy and not sticky.

We sat around the campfire and tried to spot satellites. Orion was there, on his side rather than upright, as he is in North America. Venus was close by. Sonya, who grew up in London, saw his first shooting star. Dave interrupted our reveries with one of his many stories.

“Oh, did I ever tell you about the bear problem I had when I was living in Alaska? We had two black bears. The male must have been 300 pounds and the female 200 pounds. They would get into the neighbor’s garbage and drag it up into my yard and leave a mess. I would have shot that bear, but the game warden told me not to. Instead he came and set up a live trap. Sunday morning at 6 am I get a call from my neighbor. ‘Dave,’ he says, ‘you gotta come down here.’ ‘We get the bear already?’ I ask. ‘Just come down here,’ he says. I threw on some sweatpants, grabbed a cup of coffee and rushed down there. Well, it turned out we didn’t catch a bear. We caught a hippie, some college kid wandering home drunk. We couldn’t open the cage because it required a certain kind of wrench, and, because it was Sunday, we had a hard time getting ahold of the warden. It was 9 am when he finally came, and, boy, was he pissed. Made the kid sign the ticket before letting him outta the cage.”

After dinner we heat some water in the kettle and set up a wash station. Three people wash and the rest of us are “flappers:” in lieu of a germ-ridden dishrag, we hold the plates, pans and silverware and flap our arms until they are dry.

Check out the next issue of the Peninsula Pulse to read Part III.