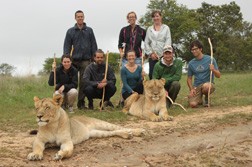 One of the many experiences Brittany Jordt enjoyed on her overlanding trip through Africa was meeting lions at Antelope Park in Zimbabwe.

The nights we bush camp it feels like we are having an authentic African adventure. Helena spends her time looking for creatures. She fawns over beetles and moths, cooing about how beautiful they are. Tiny lightening bugs send yellow bursts of light through the forest making it look enchanted.

Mostly though, we camp at group sites that are part of hostels or hotels. Often, there’s a little shelter where we set up the kitchen. In the states campsites are individual affairs, but here it’s a little plot of land, grass or sand, where we are clustered together.

In this manner, we travelled all the way from Nairobi, Kenya to Cape Town, South Africa. Our route brought us through Tanzania (including Zanzibar), Malawi, Mozambique, Zimbabwe, Botswana and Namibia. When Colin and I climbed on the truck in Nairobi, fourteen people were on the truck, and had been traveling with Oasis for 20 days through Uganda and Rwanda, to see the mountain gorillas. Of these, only seven ended in Cape Town, for a total of 74 days on the road (as opposed to our 54 days).

The truck, a Scania, made in Sweden, is a pretty durable beast. Even so, we suffered several set-backs on the road: our battery died and Dave had to rewire the system to accept an African made battery, we got several flat tires, and we got stuck in mud in Namibia after being run off the road by a large truck in a construction detour.

Somewhere in Mozambique, Dave, who “doesn’t get bitten by mosquitoes,” got malaria. Everyone who works for an overland company in Africa gets it at some point or other because you can only take malaria pills for three months before they start really wreaking havoc on your liver. Dave’s strain of malaria incubated for a couple of weeks and showed itself in Victoria Falls. All the cigarettes and whiskey caught up with him there. His body’s immune system was too weak to fight properly. When it was clear that his recovery was going to take more time than we had, Ishy had to find us another driver. Hence the trial by fire.

The majority of people who overland are in their 20s or 30s. That said, companies like Oasis attract people of all ages. Of 24, a couple of people were in their early twenties and still in college, and five were over the age of 40. Some are between jobs, others quit to come here, and a few people work seasonally. We have had some characters. A petit, loud-mouthed Australian who actually paid African moms $1 to take pictures of their children; Helena (the Argentinian zoologist) who always has her bird and mammal guidebooks and binoculars out, and who got chased by a monkey; Steve, a red-faced Scotsman who’s mischief-making rivaled the fabled leprechauns (and who nearly fell into a Ugandan sewer); Mark, the late-forties creeper; and Audra, a high-maintenance New Yorker who didn’t know she signed up for a camping trip.

Traveling in a large group isn’t for everyone. If you want alone time you have to take it by force. You get to know people pretty well when you’re squatting in the bush a few feet away from them.

We have made some incredible friends. On Christmas Day we swam and snorkeled in a giant fresh water lake in Malawi and ate a huge potluck-style meal. We spent our New Year’s Eve in a dilapidated hostel in Chimanimani, Zimbabwe, eating barbecue and lighting off fireworks at the foot of the mountains that border Mozambique.

A few days ago in Namibia, we bush camped in Spitzkoppe, where there are giant rock formations reminiscent of Utah’s canyon lands. Four of us climbed up one of them for sunset. We brought our sleeping mats and bags, and we camped in a little dried-up rain pool in the middle of the rock. The moon was nearly full, and its powerful light eclipsed the stars and bathed the rust colored rocks, which glowed beneath our feet and made me think of moonwalking. We woke up at 6 am, as the first rays of sunrise crept into the sky. From where we were laying we watched the clouds turn from stormy blue to burnt orange and red.

As far as nationalities, we are a mixed bag, but most are European. We’ve got a couple of New Zealanders and Australians, too. Where are the Americans?

Americans have less vacation time than Europeans, which keeps them from traveling too far away from home when they have a little time. In Door County, where most of the residents work seasonally and a lot of people travel, our folks are the ideal candidates for an overland trip. You can choose nearly any country, and any length of time. Oasis has trucks in South America and the Middle East, and there’s a longer African trip that goes from Cairo to Cape Town. There’s flexibility as to where you get on or off the truck, how many “optional excursions” you take part in, and when you want to forgo camping and upgrade to a room. You can build your own adventure on a budget. There are several other companies that run overland trucks, but Oasis seems like the best value for the money – the cost is considerably less than most.

By the end of the trip, our drive days were no longer filled with getting-to-know-you chatter. We spread out in the now relatively empty truck and slept, read or tuned in to our iPods. Namibia gets its name from the Namib desert, and the climate was hot and dry during the day and cool in the evening and early morning. Hot air blew through the truck like a hair dryer. A fine layer of dust covered the ground, the seats, and our bodies. Dave pulled over somewhere near the Tropic of Capricorn for a mandatory pee stop where he broke down for a week last trip. We threw rocks at the speed limit sign. Dave pointed out where he ran naked through the desert.

The truck can’t drive into South Africa, so Oasis chartered a bus to make the ten-hour drive from the border of Namibia to Cape Town. As trip leader, Ishy stayed with us, while Dave stayed with the truck. He drove us to the border at 6 am wearing a bright orange tunic with multi-colored zigzags. As we were saying our goodbyes, a small dog trotted toward us and stood looking up at us, wagging its tail expectantly. He was clean and soft and looked well fed, which was surprising for a border dog. As we got on the coach, Dave waved and turned to go. The dog lingered for a moment, and then trotted off after him. It occurred to me the truck could use a mascot. It sure gets lonely on the road sometimes. Too bad he thinks they’re all filthy. Most of us chose overlanding for the camaraderie. I think it’s likely Dave also looks forward to the solitary interlude, the drive back up to Nairobi, before it all starts again.