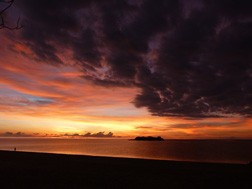 This is one of the many sunrises Jordt witnessed on her overland travels; this was snapped at Kande Beach in Malawi by Colin Frater.

Every morning before we left camp, Dave filled two thermoses with instant coffee. The caffeine kept him on high alert as he guided the truck down pot-holed roads that wound up into the mountains between Malawi and Mozambique, Mozambique and Zimbabwe. A cigarette drooped at the corner of his mouth as he stirred the black sludge, smoke tendrils spiraling into the predawn at our bush camp.

It was raining when we pitched our tents the night before. We scrambled with our rain fly beneath power lines that drifted down into the valley. When I crawled out of my tent at 6 am the sun was already sending blistering rays earthwards, heating the rain fly and making the tent into a sauna. The small road under the power line turned out to be a commonly used thorough-fare, and two women, one with a baby bundled on her back and the other holding the hand of a five-year-old, stared at me in surprise.

“They’re going to go back and tell their friends they know where Mzungus come from,” Dave said. “They come from green pods in the woods just outside of town.”

He grinned broadly, revealing a jumble of teeth. His smile, paired with the sparkle in his eyes, gave him an impish youth. He hunched his shoulders, and his gray T-shirt hung loose on his tall, wiry frame. Only combed back on special occasions, his grey hair stuck out like Einstein’s, which seemed appropriate, because Dave walked a fine line between wicked smart and crazy.

Having done my business in a bush I walked back to the tent, deflated my air mattress, rolled up the sleeping bag, and packed my rucksack. Colin and I hauled the bags to the truck and stowed them in our locker under one of the rear seats. Then we walked back to the tent, took it down, rolled it up, and piled it onto the truck. It was 6:30 am. We made ourselves tea and toast, sometimes eggs, sometimes porridge. We would hit the road by 7 am. This was the routine.

24 of us piled onto the back of the truck and settled in for the long haul. We were bush camping again that night, and crossing the border into Zimbabwe the following day. We were very low on water. Normally we filled all 12 jerry cans and purified them before leaving a campsite, but it got overlooked in Lilongwe. We only had six full jerry cans for two bush camps, which, with cooking and cleaning for the whole crew, is not enough. We had to find water somewhere along the way. In addition, we were driving a different route through Mozambique, so we were in uncharted territory.

We drove for hours. People slept, read, or watched the scenery roll by. The sides of the truck open above the seats, outfitted with a tarp we rolled down in the event of inclement weather. We kneeled on our seats to look out the window, and waved to children who most often waved back (but sometimes threw rocks). For pee stops, photos, or emergencies, we operated on a buzzer system. One buzz for pee, two for a photo, three for the sides up or down, one continuous buzz for emergencies.

Helena, an Argentinian woman who works at a botanical garden in Canada, could be counted on to buzz for pee stops regularly. When she did, we dutifully gathered our toilet paper and traipsed off in search of cover. Dave skillfully chose stops with a fair amount of shrubbery.

Africa is huge. Traveling over land takes a lot of time, which means we endured some massive drive days and a lot of early mornings. We have seen more sunrises on this trip than in our entire past lives. I have read nine books, four of them about Africa. We have eaten more Pringles on this trip than ever before. I don’t even really like Pringles, but we purchased them in mass and passed them around the back of the truck and I guess they grew on me (or I ate them out of boredom). We have also sampled the entirety of Africa’s biscuit selection.

Some drive days we watched the landscape change from mountains surrounded by dense forest to teeming cities to vast savannahs that stretch to the horizon. Small huts made from stick and mud speckled the countryside. Some of the huts are made from bricks. The same mud is packed into a brick press before being baked in the hot sun, awaiting able hands to assemble them into house.

On numerous occasions we saw giraffes grazing, staring lazily at us as they munched Acacia treetops. We stopped for a herd of wild elephants, a tiny baby among them, swinging his trunk while dutifully following mom across the road. We saw all manner of African deer: springbok, gemsbok, dik-dik, impala, and gazelles (to name just a few).

We pulled into a small village around 1 pm and stopped for lunch. It looked pretty desolate, but Dave saw nothing better along the way. So we slowly stirred and climbed off the truck, numb with inaction and temporarily blinded by the sun. We moved without purpose, even though the clock was ticking. There were a few half-hearted touts selling bags of muffins, cold cokes and Fanta, a dirty old baby doll.

“No, it’s been awhile since I played with dolls,” Georgio, the gay Italian graphic designer, shooed him away.

I’m not a strict vegetarian at home, but in Africa I decided to abstain from meat. Colin and I wandered into a few restaurants but the only thing on the menu was chicken and chips. Indeed, it seemed that chicken and chips were the main African cuisine. I have not seen much variation from country to country.

We rounded a corner and entered a little plaza. A water pump sat at the center of the square. Ishbel, or “Ishy” our gangly, blonde, Scottish trip leader was one step ahead of us. She saw the pump, which was locked, and made a move toward one of the shops to inquire whether we might take some water.

A hand-painted sign read, “food and drink” and we went inside. A large black woman sat fanning herself. She stood to greet us.

She cocked her head quizzically.

“Eat,” I gestured, bringing my hand to my mouth.

“Chicken and rice,” she said.

It was clear she had no idea what I wanted. We bought a Coke and turned to leave. She gestured to the bottle, and then to herself. She wanted us to return the bottle when we were finished. Most places in Africa, people sell returnable glass bottles so it’s generally expected that you drink your beverage nearby and leave the bottle.

Check out the next issue of the Peninsula Pulse to read Part II.