Our friend Ryan Brady, all-star birder from Washburn, Bayfield County, Wis., has been keeping track of the start of a Snowy Owl irruption in our state and, as reported on Dec. 21, is up to approximately 116 birds and growing. What’s so unbelievable about these majestic birds is that one has even been seen on the island of Bermuda!

Evidently breeding conditions in the Arctic were excellent for these owls this past summer, and now the young of the year are finding themselves short of food and forced to head south to find some. 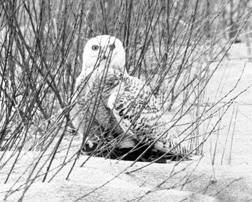 We just received an email from our good friend Laura, living in North Carolina, telling of a Snowy Owl being seen as of Dec. 7, near Rosman, which is southwest of Asheville close to the South Carolina border. Birders from South Carolina, Georgia and Tennessee, about 300 in all, came to view this rare owl, a lifer for many of them.

Past records indicate there is a marked increase every four years of these birds moving south in early winter, very likely resulting from a crash in the Lemming population in the Arctic. This winter the majority of the Snowies are being observed along the Atlantic coast. Hopefully this trend will gradually change to the Midwest, so keep on the watch.

Look for them on high perches such as electric power poles, fuel storage tanks, tops of bridges and silos. Areas having a build-up of some ice along open water attract them, as do marshy habitats often surprisingly close to large cities. Apparently the owls’ prey species, including meadow voles, rats, mice and injured waterfowl, are most abundant there.

If you are fortunate in getting a good picture of a Snowy in flight going away from you with its tail spread out, as did Mike Grota (see photo 3), you can determine the bird’s sex. Male Snowy Owls have three or fewer dark cross-stripes near the tip of the tail, while females have four or even five cross-stripes on their tails. Grota’s Snowy’s tail clearly has three stripes – a male.

Snowy Owls made the headlines in several northeastern Wisconsin newspapers during the winter of 1961. A large “invasion” into the state by the white owls lured the famous wildlife biologists and raptor banders, Frederick and Frances Hamerstrom from Plainfield, Wis., to Green Bay and the ice-swept expanse where they trapped and banded a record number of them.

Three of the Snowies were recovered in upper Michigan on May 14, 1962, and during the following years a few more were recovered both east and west of the James Bay area in Canada. These incidents, for the first time, at least indicated where some of the Snowy Owls that had wintered in Wisconsin were returning to nest.

Some dyed-in-the-wool Green Bay Packers fans can recall the memorable day of Dec. 31, 1967. Those “brave souls” sitting in the stands watched the Packers nose out the Dallas Cowboys for the NFL championship, a game played in the unbelievable temperature of -13°F! Those same half-frozen football fans would have looked at my friend Tom Erdman and me in disbelief that day (not watching the big game?!). Our game was occurring on the sub-zero “frozen tundra,” the iced-over marshy flats a few miles north of Green Bay where we were attempting to trap and band Snowy Owls. I hate to mention that we caught zero owls that bitter cold day, but, like the Dallas Cowboys, at least we tried. 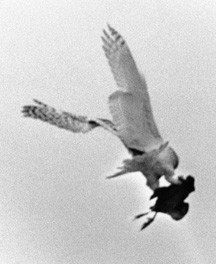 The secondary flight feathers, closest to the body, are cupped on the down stroke to catch more air for lift power, with the Green Heron in its grip.

My very first live Snowy Owl sighting occurred when I was a junior in high school, during the late winter of 1945-46. My buddy Tony Kotyza and I rarely missed being in the woods or along the Lake Michigan shore on weekends. We had hiked along the beach several miles south of Kewaunee and were returning home just before dark along Lakeshore Road. Apparently there hadn’t been too much snow that winter because I recall many bare spots on the frozen fields.

Suddenly Tony and I both looked at what appeared to be a big light-colored sack of feed on top of a little knoll out in a field. You can imagine our surprise when the “sack of feed” turned its head and looked at us with its huge yellow eyes, its eyeballs nearly as big as a person’s. Actually the Snowies’ irises are a bright yellow while the pupils naturally are jet black.

That trusting owl allowed us to approach to within approximately 50 yards. Its majestic takeoff and its soaring fight to a distant hill impressed us very deeply, one of those precious boyhood memories that will vividly remain for many years.

There are times when the sight of a predator-prey drama can be awfully disheartening. Take for example the incident that occurred at our friend’s home at Hidden Brook at Baileys Harbor during the first week of March 1981. A few days earlier our friend had excitedly called about the glad return for the season of “her” Green Heron. Now her tone of voice was different as she called telling us the sad news. The big female Snowy Owl that had wintered along the shore at Baileys Harbor was calmly eating its lunch on her front lawn…you guessed it, the Green Heron.

Within seconds I had my camera with a 400mm lens and was driving to the shore at the Baileys Harbor bathing beach. As soon as I turned the corner off Ridges Road toward the beach, who should poke its head above a small drift of sand but the “White Terror of the North” herself. Studies prove this owl is capable of carrying in flight a victim, such as a large bird or Snowshoe Hare, that weighs considerably more than the 3½-pound owl. 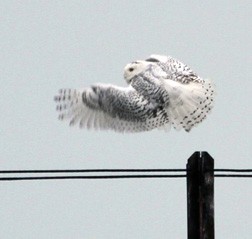 This male Snowy Owl, wings sweeping forward, takes off for a site with better hunting for mice or meadow voles. The three cross-stripes near the tip of his tail indicate the owl’s gender.

Fortunately she alighted on a small rise of sand about 125 yards down the beach. There she sat, lemon-yellow eyes glaring at me, squatting over the Green Heron, which was clutched tightly in her powerful talons. (Snowy owls are extremely “talonted” birds!) For the next two or three minutes I cautiously inched toward the owl. I’d take several slow steps, stop and take a picture, a few more steps and another picture.

Suddenly it reached its long broad wings high above its head and took off toward the west, slowly gaining altitude as it flew. The up-strokes of the wing beats were considerably faster than the strong, sweeping, more deliberate down-strokes that carried it finally in a direct sailing flight beyond the creek to a more secluded vantage point where it could continue to consume the Green Heron. Fortunately I did manage to get at least one decent picture of the owl’s get-away with its wings held high.

I read something fascinating in Peter J. Marchand’s excellent book, Life In the Cold: An Introduction to Winter Ecology. Previously I had thought that birds, having mostly dark feathers, would maintain warmer body temperature in that the dark plumage would absorb more radiant energy. Marchand’s research discovered precisely the opposite – that the insulating value of birds’ white feathers exceeds that of dark feathers. The same holds true for Arctic Foxes, which in their white winter fur appear to rest comfortably at temperatures of -40°F.

I hope you stay warm this winter, regardless of the color of your coat, and please remember to be on the watch for Snowy Owls.