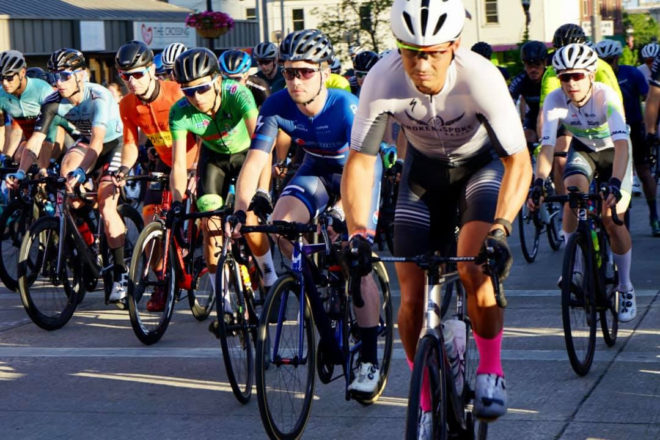 Before he was an immigration lawyer, Fagundes (front, wearing white) was a serious road racer.

There seems to be a pattern in Luca Fagundes’ life in which his childhood experiences directly influence his interests and direction as an adult, from his career to his hobbies, cycling included.

“When I was very young, I was a gymnast,” Fagundes said, but a torn meniscus in his left knee put an early end to any gymnastic aspirations. With limitations placed on which sports he could participate in, he picked up cycling.

“I started road biking, eventually doing some racing,” he said.

But behind the no-big-deal tone of this statement is an impressive list of racing accomplishments, both in and outside the United States, as well as a few pro races.

Fagundes took a break from professional racing when he entered law school, but he decided to jump back in this past June, competing in the Tour of America’s Dairyland race in Manitowoc.

He recounted his return to racing on his Facebook page.

“2006 was my last year racing,” he wrote. “Fifteen years later, I decided that I wanted to give my kids a glimpse of my past life.”

He described the experience as a “sufferfest” but took pride in the fact that he was in the lead group for 42 of the 50 laps.

“My kids watched me suffer like a dog,” he said, “but they were my most important spectators. It was a good time.”

Aside from being a stress reliever, cycling has opened doors to new interests and creative outlets for Fagundes — specifically in photography. He shares his love of Door County through photographs, mostly taken on his bike rides, which he then posts on Instagram under the handle @doorcountyshots.

“The photography thing is funny because it came about from me just taking pictures of stuff I would see while I was out riding,” Fagundes said.

A cloud-covered sky, a meadow at sunset, an abandoned farmhouse: These are just a sampling of the sights he captures from behind the lens while cycling the county’s back roads. In addition to being a creative outlet, photography provides Fagundes with a sense of completion that he doesn’t always get from practicing law.

“Sometimes, even when you close a case, it doesn’t feel finished,” he said. “There are times I can’t put a bow on it and say, ‘I’m done.’”

Photography, he said, is different.

“If I capture a nice photograph of something, and I do a little tweaking and editing on it, I can put it out there as a form of art for people to enjoy. That is a really rewarding feeling,” he said. “It’s like saying, ‘Here, I did this. This is something I was able to put out there completely finished.’”