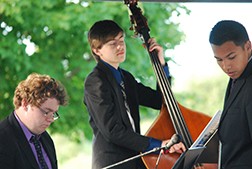 Six years ago, Timothy Murphy’s mother signed him up to play saxophone in the school band.

“My mom thought I was being lazy because I wasn’t doing much when I was younger,” he said with a shrug.

Timothy, along with Alexander Murphy, Alexander Frazzetto, Anthony Gonzalez, and Andrew Egizio, make up the Birch Creek Jazz Ambassadors, a combo of advanced jazz students directed by José Encarnación. Encarnación, an instructor of Jazz and Improvisational Music, and the Jazz Performance Coordinator at Lawrence University, plays drums and Latin Percussion for the group.

Though many of the Ambassadors were introduced to jazz through large ensembles, at Birch Creek, they do not play with a big band.

“Our schedule is so dense that we don’t really have time to be in rehearsals with the big band,” Timothy Murphy said.

Ambassadors begin every morning with a master class for their specific instruments. Rehearsal goes from 9:15 am to 10:45 am, followed by lunch, and then at 2 pm, another hour of rehearsal. If the Ambassadors don’t have a concert that night, and aren’t listening to one, they rehearse from 6:30 pm to 8 pm. 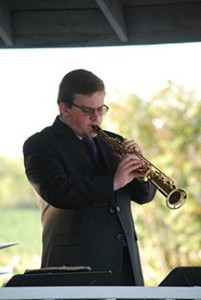 “So that means he went home and really practiced,” Encarnación said. “Which is one of the reasons that they come here – just to get a lot of teaching and private instruction.”

Ambassadors complete the same audition as big band players, and on their audition form, indicate that they are interested in the group. Ultimately, their musicianship and improvisational skills distinguished them from other hopefuls.

“When I came back last year it was the first time I had actually enjoyed playing in a jazz combo setting. I had never really thought too much about the combo players; I had always liked playing in a big band setting more. But last year when I was in this combo, José really opened up my eyes and helped me realize that combo playing can be just as fun and just as exciting as big band playing.”

“And you know,” he added, “it was also fun to have a small group of people, we are hanging out all the time and playing music.”

Being an Ambassador hones more than the students musical skills.

“Being up here kind of showed me how to play in a group, and have a busy schedule and how to fit into settings like this, private parties, farmers markets. It was a lot of good experience to bring back home, it taught you professionalism, and how to conduct yourself, how to represent yourself,” pianist Alexander Murphy said. 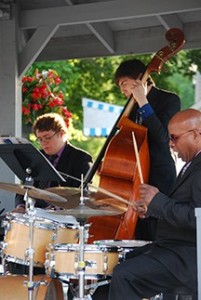 “So we’re basically on the road for two weeks,” he added, “which is great. It’s what we love to do.”

The Ambassadors’ talent and love of jazz is obvious in their playing, and appreciated by their audience. At their most recent Gibraltar Grill performance, a family of tourists from Ohio sat inside to avoid “a noisy band,” but after the first tune, migrated onto the patio.

“We moved inside when they said there would be a band. But this isn’t a band! They’re wonderful… they’re professionals!”

The Ambassadors will play again at the Gibraltar Grill on Thursday, July 30 at 8pm, and on Friday, Aug. 7 at 7:30pm. Ten percent of the restaurant’s earnings on Aug. 7 will be donated to the Birch Creek Scholarship Fund.