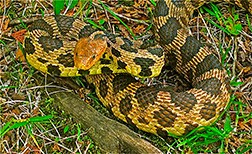 A Western Fox Snake lay in the warm sun in the center of the road near Sturgeon Bay Ship Canal Nature Preserve. This beautiful critter is one of my favorites (we used to call them pine snakes). I drove up and was about to move it to a safer place when I noticed severe head trauma thanks to a car tire. Someone had apparently veered to the center of the road to attack this snake. Unfortunately, in the words of the munchkin undertaker, “She’s not only merely dead. She’s really, most sincerely dead!”

Fox snakes are valuable members of a group of modest-sized constrictors known as rat snakes. Not as common as they once were, they are found throughout Wisconsin. Their diet consists of small mammals and birds. Like other rat snakes, they are capable of climbing trees, but fox snakes are more at home on the ground. Their background color is yellowish tan, with large black blotches along the back. The head is copper colored.

If you approach a fox snake its tail will often vibrate. It can almost sound like a rattler if the tail comes in contact with something such as dry leaves. Although we have no rattlesnakes in Northeast Wisconsin, the fox snake would like to convince you it’s dangerous, hoping you’ll just leave it alone. Actually it’s quite harmless and shy, and is an important part of our ecosystem.

Last summer I found another fox snake near Cave Point that had been run over. I felt a wave of nausea. Not only was that snake dead, but there were also at least six eggs on the road. This was a double tragedy. I wondered whether someone had purposely done this, and if so, why. Snakes are commonly victimized by cars and trucks. This is somewhat behavior related. They depend on stealth in order to be missed by meandering meat-eaters. On the road, they may just sit still. All too often they can be run over, usually, but not always, by accident.

Anthrozoology is the study of human-animal interaction. A major focus of this growing field of research is the quantifying of the effects of human-animal relationships, such as pets, domestic livestock and wildlife.

Dr. Hal Herzog, in Psychology Today, quoted a Canadian study in which fake turtles and snakes were placed on a rural highway. Researchers recorded the responses of motorists to the perceived wildlife. As you might expect, the snake was most commonly victimized.

They discovered that kindness to animals could fit a normal bell curve distribution. Ninety-four percent of drivers (middle of the curve) ignored the fake turtle and snake and drove on. The extremes on either end of the curve were of particular interest. Three percent pulled over, attempting to help the animals off the road. The other three percent veered toward the fake animals, attempting to kill them. Men were more than three times as likely as women to intentionally hit the fake animals. This could be attributed to a fear factor.

Psychologists don’t agree on why a fear of snakes seems to be our most pervasive animal phobia. Is it instinct or learned fear, or cultural aversion? Maybe there’s even a “weird factor.” Snakes, after all, are pretty unlike us mammals.

Roadkill in general is not a random sample of local wildlife. There are certain species that frequently end up as victims of car tires. One answer to the age-old question, “why did the chicken cross the road,” is very telling: “to prove to the opossum that it could be done.”

Roadkill is often victim of their own behavior. Playing ’possum is a bad idea on a roadway, particularly when there are speeding vehicles approaching. This small, slow marsupial is a good example of the types of animals that frequently become “road pizza.”

A couple other examples often featured on the main street menu: skunks announce who they are with striking black and white markings, and expect everyone will heed this warning and let them alone. Porcupines are slow and deliberate and depend on their quills to discourage potential predators. Deer may think they can run past those horseless carriages – oops, there go your fender, bumper and headlight. Timid turtles like to cool it in their shell (often in traffic), trying to wait out danger. This clearly doesn’t work in the roadway. That shell may prevent a peckish predator from partaking, but it is no match for a moving Mazda. Some of the more wary animals such as fox or crows rarely are seen as roadkill.

According to the Anthrozoology Institute: “The relationship between mankind and the natural world is a key issue for this century. As human activities come into more and more conflict with other species, anthrozoology will have an increasing role to play in determining and shaping human attitudes toward animals in general and domesticated species in particular.”

If we are to preserve and protect wildlife, it will be necessary to focus on ways to restore habitats, reduce impacts of our dwellings, cities, pesticides, and roadways on wildlife. It will certainly help to encourage kindness toward other animals and plants, such as: snakes, dandelions, and a whole plethora of perceived pests, before we overreact.

“The purpose of life is not to be happy. It is to be useful, to be honorable, to be compassionate, to have it make some difference that you have lived and lived well.” ~ Ralph Waldo Emerson