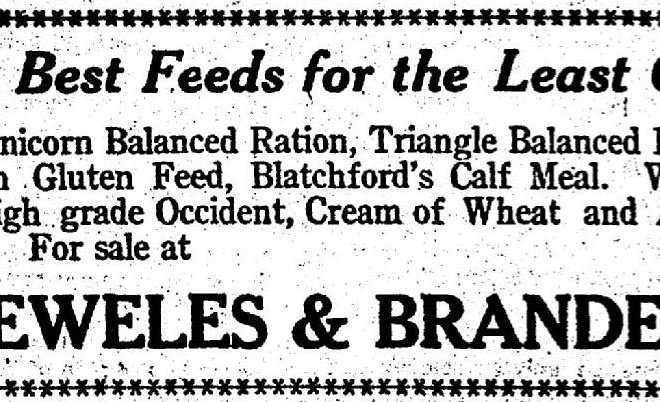 A frost last Saturday night, and Sunday night did considerable damage to cucumbers and squashes. In some parts of the county, corn and potatoes were badly damaged.

There being danger that the well on the high school grounds might be polluted by one of the outhouses situated near it, the school board decided to remove the building to another part of the lot, and this work was done last week. As all the cases of typhoid fever that have occurred in this city have had their origin in impure drinking water, the precautionary measure taken by the board will be warmly commended by the parents of school children and all others interested.

The “fish car” belonging to the state fish hatcheries, arrived in the city on Thursday morning’s train. It brought 8,000 black bass for planting in Clark’s lake. The young fish were taken to the lake and planted the same day.

The supply of coal brought in this week by the steamer Arizona will keep the city light plant and the school house in fuel until next spring. The coal cost $2.25 per ton. To this must be added sixty-five cents per ton for freight, and forty cents per ton for unloading, making $3.30 per ton in all. There were 882 tons in the cargo. Louis P. Nebel was given the contract to unload the coal.

This city will undoubtedly have a late afternoon train and better railroad service as the result of the hearing conducted by the state railroad commission at the city hall Tuesday.

Among the local business men that appeared before the commission and gave testimony for the betterment of the railroad service were: Albery Kalmbach, Joseph Hoslett, M. B. Goff, Earl Johnson of Fruit Growers’ Union; Frank Behringer, representing Leathem & Smith; H. C. Scofield and Earl M. LaPlant.

Messrs. Kalmbach and Hoslett appeared for fishermen in the interests of express shipments. A late train would make it possible to get fish to the outside markets in good time. The other business men brought forth the numerous advantages to be gathered thru better train service, and that local business conditions demand it.

James Bruere, of St. Charles, Mo., playing with Harold Krammer, of St. Louis, performed a feat very seldom accomplished in golf. Mr. Bruere was playing on the Country Club course Saturday afternoon and in the eighth hole made the hole in one. The yardage was 130.

This is the first time such a feat was ever performed on any course in the county and it is rarely such a thing is done in golf circles.

FISH CREEK – Carrie Jacobs Bond, composer of the much-loved “When You Come to the End of a Perfect Day.” was the surprise guest with the Meistersinger Guild concert here last Sunday night, given under the auspices of the Fish Creek Woman’s club.

Mrs. Bond was introduced to the audience by her niece, Mrs. Arthur Byfield, after which Mrs. Bond spoke to the assemblage and then played her composition on the piano. The offering, given the composer’s own interpretation, was beautifully done, and the audience applauded the masterful rendition of the number.

The concert was a decided success, and a packed house filled the gym of the Gibraltar High school.

The guest composer is spending the next few weeks here as the guest of Mrs. Byfleld at the latter’s summer home in Ephraim, and since her visit was unannounced, her appearance at the concert came as a complete and thoroughly pleasant surprise.