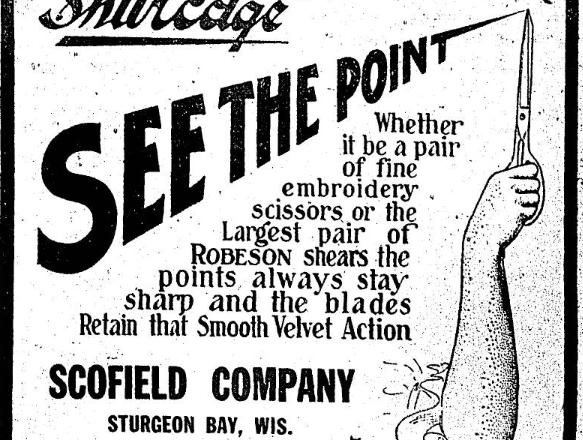 The first of the series of Indoor base ball games to be played by the Sawyer Athletic Club took place on Monday evening and the members of the two teams as well as the spectators enjoyed an evening of sport.

The boys have been practicing diligently and there has been considerable speculation as to which team was the stronger and it was generally conceded that No. 1 was the stronger of the three, but in the first game No. 2 beat No. 1 by a score of 17 to 14.

See Many Does in the Woods

According to the hunters who returned from the northern counties, they saw many does in the woods that had been killed by mistake. It is a very difficult matter, they claim, to distinguish a young buck from a doe, as the former has horns only a few inches long, and when running it would require a telescope to determine the fact. The result is that there is not one hunter in a hun­dred that will not take a shot at the animal, and if it happens to be a young buck they are that much ahead. If a doe, they leave it lay, or probably take a piece of venison to camp to cart home in their grip.

The one great trouble with the buck law is that it makes nearly every hunter that goes into the woods feel like a hunted criminal, because he cannot re­sist the temptation to shoot the first deer he sees, whether it be a doe or not, and then everybody he runs across afterward he thinks a game warden looking for him. At least “this is the tale as was told to me.”

It seems that there is considerable prospect of Kewaunee having a beet sugar factory in the course of time. At a meeting of the business men’s association in that city the matter was discussed and amounts aggregating 135,000 were pledged by members present. It is considered that it will cost about $250,000 to establish the enterprise, and they think they can raise $100,000 in that vicinity.

It seems remarkable that a place like Kewaunee can raise $100,000 for an enterprise of this kind, when if this whole county should be asked to raise one-half that amount for some equally beneficial matter they would doubtless kick like steers and go dead against the affair. This is one reason why we have not yet any prospects of a railroad, and we never shall have one as long as the people are so slow in recognizing the advantages of new enterprises. It is the hustlers that get there nowadays.

Mr. Dan Oharn, who lives on the Egg Harbor road, informs us that he killed an animal last week, the name of which is unknown to him. It is of the cat species, ranging between the ordinary house cat and a wild cat. The color of the animal which Mr. Oharn captured was “red” and its weight was twenty-three pounds.