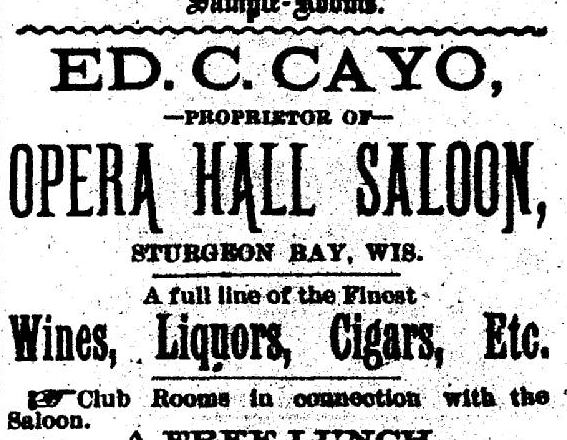 MR. WILLIAM SANDERSON and family have moved to Cana Island and taken charge of the Light House there. We know Mr. Sanderson’s business habits so well that we can assure seamen they will always find a good light on Cana Island while Mr. Sanderson remains in charge. His Post office address is Bailey’s Harbor.

While George C. Fritschler, of Sevastopol, was in town Monday he informed an Independent reporter that he expects to complete in a few days his work on the Egg Harbor road between sections nine and ten. Under his contract he is required to raise this road for thirty-two rods, putting in fifteen inches of stone, eight inches of earth and three inches of gravel, making a total elevation of twenty-six inches. This track is ten feet wide and for twenty-five rods will on each side have a stout railing to prevent teams from getting off the causeway. The oak swamp through which this road runs is one of the worst places in the county, there being no chance to drain the road without incurring great expense.

Last Friday evening, Nov. 3rd, several parties in the city witnessed the transit of a very large meteor in its course from east to west. They assert that it was apparently very close to mother earth, and that it moved at a very slow speed. This is doubtless the air ship seen in Minnesota the same evening.

Philip Herbold and John Smith, both of the town of Sevastopol, were among the fortunate farmers this year, both of them having a good stock of Alaska peas on hand when this variety of peas were bringing $3.80 per bushel. The peas were bought by Tewels & Brandeis and the former gentlemen received a check for $1,435.50 and the latter one $825.

PRESENTED WITH AN AUTO

Rev. H. M. Mason of Ellison Bay was most pleasantly surprised the first of the week when the members of his congregation presented him with a modern Ford auto of the latest pattern and design. The pastor greatly appreciates the generosity of his friends in the northern part of the county. An auto is almost a necessity in his profession and he is very grateful to those who have made it possible for him to have one to visit the members of his congregation when in need of his services.

SEARCH FOR BODY OF

All efforts to locate the body of the late A. P. Vander Kelen, Door county game warden, who drowned when his boat upset in the rough sea on Tuesday of last week between Little Sturgeon and Rileys Point have been futile. Little hope is held for its recovery until the body comes to the surface and drifts ashore.

The coastguards combed the bottom of the bay thoroughly but their only reward was the finding of his knapsack and shovel which was in the boat at the time of the accident, and a gun belonging to Mr. Grange. Dynamite was used in an attempt to bring the body to the surface, but to no avail.

According to Frank N. Graass the appointment of a new game warden for this district will be made in the next few days.

At the regular meeting of the board of directors of the Bank of Sturgeon Bay held on Friday, Nov. 4, Clifford H. Herlache was elected to the position of cashier of the bank and assumed his duties Monday of this week.

Mr. Herlache is a graduate of Sturgeon Bay High School and he also received his degree from the University of Wisconsin. Since graduation he has practiced law in Sturgeon Bay, and acted as deputy commissioner of banking in charge of the liquidation of the Door County State bank and the Merchants Exchange bank. He is also serving his third term as city attorney.

Mr. Herlache needs no introduction to the people of Door county. His experience especially qualifies him for his new position.