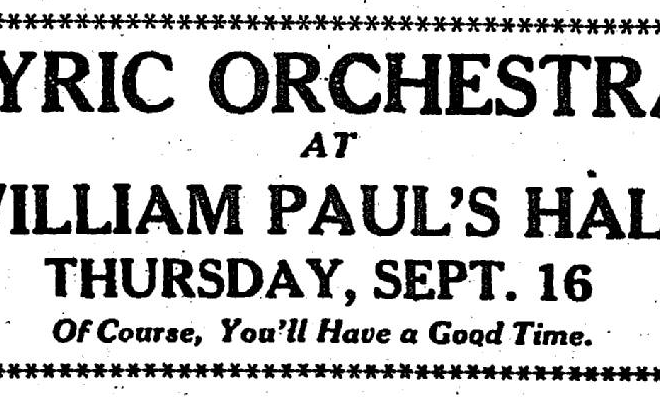 Are you going to the black Hills after gold? If so, don’t start until you have called on I. B. Scott, at his jewelry store for one of his first class revolvers with a supply of cartridges. His supply of cutlery is also very full and all of best quality.

There was a harvest dance at Frank Pierre’s in the town of Brussels, on Sunday of last week, the dancing continuing until Tuesday. A very large number were in attendance.

There is some talk among bicycle riders of having a “road race” here in the near future. There are many in this county, who, no doubt, would enter and help make it a success. The distance will probably be ten or twelve miles.

The police officers are having considerable trouble with tramps and are kept busy running them out of town. Rumors are afloat of attempted burglaries but there is nothing in the reports as far as we were able to learn. It will be well to keep houses and business places securely locked, however.

Door County News
September 11, 1919
AGREE ON SCHEDULE
Change Made In Afternoon
Train For Benefit of Fishing
Industry.
MORNING SERVICE SAME
Citizens of Algoma Object to
Any Change and Will Pro-
Test to Commission.

The business men of this city and the representatives of the A. & W. Railway company have agreed on a time schedule for the operation of the trains between Green Bay and this city.

There was some very plain talk concerning the running time between this city and Green Bay and the officials were asked why the time could not be shortened at least half an hour, also why is was not possible to give this city an exclusive passenger service.

Supt. Smith said that the schedule of 2 hours and 25 minutes was as fast as it was safe to travel the 58 miles, allowing for six stops and being obliged to back into Algoma, all of which consumed more or less time.

He asserted that the passenger service, outside of the summer season when the tourist traffic was heavy, it would not be profitable to operate an exclusive passenger train. He felt, however, that the company had given this county the best service possible during the past season.

Herman Harmesiter, a summer resorter at Ephraim, recently wrote a letter to the County Highway Committee, urging them to police the highways of the county, and particularly the towns and villages.

He calls attention to the need of a motorcycle officer for the protection of the public, saying that the lives of children of summer visitors as well as the inhabitants of mature age are menaced by reckless driving of youngmen and frequently men in intoxicated condition.

Mr. Harmeister thinks that something should be done to make life and limb safer.

Appreciations for the co-operation given in the voluntary no parking plan in the business district this summer has been expressed by Mayor Don W. Reynolds, and he has asked The News to relay his thanks to the merchants who have entered into the plan.

The business men and their employees along Cedar street and adjoining streets, voluntarily signed an agreement this last spring whereby they agreed to refrain from parking their own cars on the main business street in order to allow tourists to have ample parking space. The agreement was to be in effect from June 15 to September 10, and thus comes to a successful completion this Saturday night.,

So satisfactory was the arrangement that many tourists made comments on the abundance of space available, and local merchants have expressed their gratitude in the increased revenues it has brought to them.