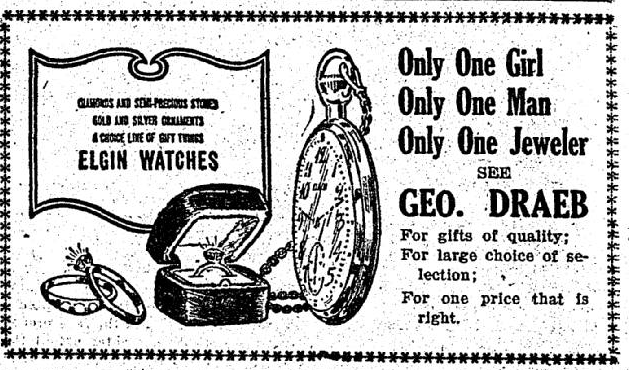 Republicans of Door County. Here is your county committee, the head of the party in the county. Look at them! H. Harris, J. Colignon and M. E. Lyman. One look is sufficient.

The family of Jugde R. M. Wright have not heard from him since the 13th of May. The last time he wrote he was in Washington territory. Since that time it has been reported that he was seen in New Orleans. The family at Fish Creek are considerably worried.

The south half of what was once the “little Lake” is now completely dry. A few years ago there was sufficient water in that part of the lake to float large sized sail boats.

The fog whistle at canal has broken all previous records for continued service this week and up to Thursday had been in operation eight days and nights without a stop.

SUES FOR BREACH OF PROMISE

Miss Norma Gauerke of Sevastopol is suing Walter Kiley of Green Bay for breach of promise and is asking for $15,000 damages.

Kiley is alleged to have promised to marry Miss Gauerke in September 1917. He denies the contention.

The sum for which the plaintiff sues is the highest that can be awarded in the municipal court. Miss Gauerke is a daughter of Mr. and Mrs. W. A. Gauerke, the former being the president of the Door County Society of Equity.

A meeting of radio dealers of east and west SturgeonBay was held at the Harry C. Lau radio display parlor Monday evening. Every radio dealer in the city was present, 12 representatives being in attendance some firms of whom were represented by two. The purpose of the meeting was to establish a flat price for services and everyone of the ten dealers in the city agreed to the prices determined.

It was also decided that a flat rate of $1.25 per hour be made for radio repair work.

Radio dealers in this city complain that they have been bothered with innumerable calls from people stating that their radios were not in working condition, when the fact of the matter was that the trouble was not in the set but due to the atmospheric conditions. So numerous have been the calls that selling radios was a losing proposition. It is though that with the service charge of $1.00 it will do away with a great deal of unnecessary calls.

Thought to have been the victim of accidental drowning, the body of Joseph Marin, 50, was recovered from the lake above the dam at Forestville last Thursday morning.

Although unable to swim, Marin had frequently gone to the lake to bathe during the summer. Marin had roomer at the Joseph Cumber home in Forestville for some time, and members of the Cumber family stated that he had been inapparent good spirits when he left the house about 6:30 o’clock Wednesday.