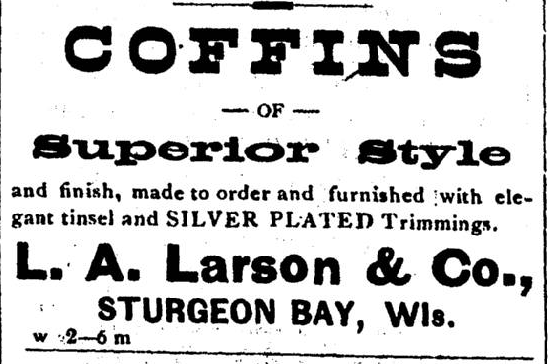 The Reform Candidate for Assembly.

Mr. A. J. Looze, the candidate for the Assembly chosen by the Reform convention at Ahnapee last Saturday, is an old resident of Lincoln. He is a successfull and well to do farmer, a man having the reputation of possessing more than the ordinary fund of natural and acquired abilities, where known, he is respected as an active, energetic and strictly honestman. He has been for some time one of the most prominent and active members on the Kewaunee County Board. He is entirely outside of the local differences which afflict both counties. His political antecedents have been for many years Republican. Latterly in common with thousands of other old line Republicans, he has become an earnest worker in the Reform movement, and will receive the earnest support of all lovers of Reform.

Last Friday evening a stranger put up at the Northwestern house whose actions made several parties believe he was one of the escaped prisoners from Green Bay, who are believed to have come to this section. Marshall Elliott being notified took a look at the party and summoned Deputy Sheriff Scott. When Mr. Scott arrived on the scene it was at once concluded that the man answered the description sent out by the Green Bay authorities and he was accordingly taken into custody and placed in jail. The next morning the Green Bay authorities were notified and Saturday evening the sheriff and chief of police came here to identify the prisoner. On Sunday morning it was found that an innocent man had been arrested both officers failing to identify him. Who the stranger is no one was able to learn and on being set at liberty he left the city, apparently for a northern point.

The Evergreen Nurseries have sent to this office some specimens of large plums that beat anything we have ever seen. They were grown on a tree grafted and grown at the nurseries, and though this particular tree is now but six years old it bore two bushels of plums this year. We measured one of the specimens, and its circumference was seven and one-half inches. They are egg-shaped and not alone beautiful to behold but delicious to taste. The day is coming when Door county apples and plums will be known the world over for their excellence.

A Madison dispatch to the Milwaukee Sentinel of Tuesday states that the State Park in Door County may be named “Stephenson park,” after United States Senator Isaac Stephenson, of Marinette. The article further states that the senator has promised a large sum of money toward the improvements contemplated by the state park board.

It is also rumored that the park board plans to keep up the orchards that are within the tract and also to improve them, it being a well known fact that Door county is a great fruit raising section.

Wins In Breach of Promise Case

Miss Norma Gauerke of Sevastopol, received all that she asked for as a balm to her wounded pride and heart in the suit for breach of promise.

The plaintiff sued for $15,000 damages, alleging breach of promise. The defendant, Walter E. Kiley, one of the prominent business men of Green Bay, fought the case bitterly.

The case occupied several days, there being some sensational evidence introduced by the defendant’s attorney in order to prejudice the jury against the plaintiff. It is evident the jury did not take a great deal of stock in these statements as they did not deliberate very long and,what is quite unusual, gave the plaintiff every cent that she asked for.

The sympathy of the jury was with the young girl and is a warning and lesson that should be heeded by others not to trifle with the affections of the gentler sex.

Wm. Hayes, of this city, who was arrested and sentenced to sixty days in the county jail recently on default of payment of a fine of $100 when he was found guilty of driving a car while intoxicated will enjoy no more leisure moments while serving the remainder of his sentence.

Hayes was “farmed out” at $2.50 per day, proceeds to go for the upkeep of his family. He was employed by Frank McCoskey, of this city, but when sent on an errand failed to return. Complaint was sent into the police that he was again seen driving his car in an intoxicated condition. Sheriff Al Osmunson was summoned and upon going to the Hayes home, found the man attempting to fix a flat tire on his car. He was in an intoxicated condition and was returned to the jail where he will be confined to his cell until his term expires.

A most successful cooking school was conducted at the Prange-Washburn Co. store in Sturgeon Bay on Tuesday and Wednesday of this week. The school was under the direction of Mr. and Mrs. F. C. Hathaway, nationally famous home economists, and attendance at the Tuesday afternoon sessions totaled about 450 women, many of whom came with notebooks and pencils to copy recipes which were offered.

No phase of cooking was left untouched by the directors of the school and many hints and tips of unusual value were offered housewives.