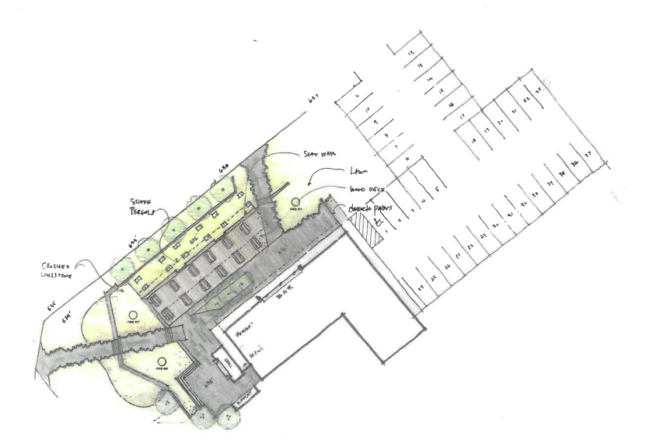 A rendering of the site layout for the proposed One Barrel Brewing taproom in Egg Harbor.

In July 2012, Peter Gentry opened what was believed to be the first nanobrewery in Madison. He called the operation on Atwood Avenue One Barrel Brewing, a name embracing the concept of a small-scale operation.

On June 26, Gentry stood before the Village of Egg Harbor Plan Commission to outline his plan and start the process for a conditional use permit to open another One Barrel taproom at 4633 Market St. in the village, currently the home of two other businesses (Forever Grateful and Jane’s Designs for Women), and right next door to the newly built Hatch Distillery, which is opening soon.

Gentry told the Plan Commission that One Barrel in Madison turns six years old next week.

“The business has expanded dramatically since then,” he said, adding that it sort of parallels Door County Brewing’s growth during the same time period, both local operations growing to statewide distribution.

“We do quite well up here,” Gentry added. “We felt that it was time to expand into a second taproom. That’s what this is,” he said, adding that his wife is from Green Bay, and they are looking forward to moving to Door County to run the business here.

The plan for the Egg Harbor taproom is to mirror the interior of the Madison taproom, Gentry said, which he described as “a cozy facility, not what you typically consider a bar.”

Unlike Door County Brewing on the other side of the peninsula in Baileys Harbor, Gentry said his taproom will not have a focus on music. Hours will be from 11 am to 10 pm, and maybe 10:30 on weekends.

The original one-barrel system that he used to start his business in Madison will be moved to Egg Harbor to “produce a very small amount of beer here,” Gentry said, adding that he would introduce four to five new beers each month, resulting in about 40 barrels of beer (or 1,240 gallons) produced annually in Egg Harbor, compared to 5,500 barrels (170,500 gallons) produced annually in Madison.

He said the building will undergo a change to the facade to more of a Cape Cod-style look with shake shingles, with more windows and colors of blue, white and gray.

“Coastal is the theme,” Gentry said.

The taproom will be built to accommodate 99 people and there will be outside seating on a wooden desk for another 72 people.

Gentry said the taproom includes what is being called a kitchen, but said, “We don’t want to have our own food.”

He said at the Madison taproom they partner with local vendors to provide food for customers. He said in Egg Harbor he would like to have a tenant who provides food and has talked to several potential tenants already, but he added that is a very small component to the overall business.

“We don’t want to compete,” he said. “We have our own niche we’re going for.”

Members of the Plan Commission had some parking questions. Thirty-seven parking spaces have been planned for the property. Gentry said there is space to add more, if the village thinks they are needed. The village ordinance on parking is based on the number of employees and seats, but the ordinance also allows for public parking within 500 feet of the building to be included. Building owner Clarence Scherer said he walked it and there are 107 parking spots within 500 feet of the building.

Plan Commission Chair Cambria Mueller said they would have a complete tally of parking spots for the second of the three meetings required on this application. She also asked Gentry to have a more detailed rendition of the building for the next meeting, which is scheduled for 6 pm on July 24.