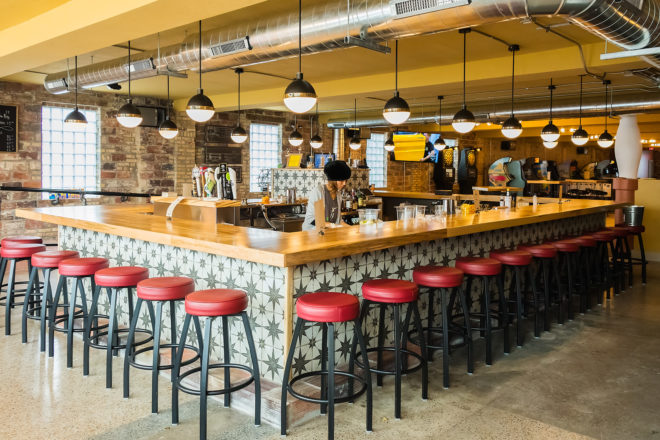 Cherry Lanes Arcade Bar of downtown Sturgeon Bay and One Barrel Brewing Company of Madison and now Egg Harbor, two of Door County’s newest businesses, are partnering up for a fun night of beer and specials. At 5 pm on Thursday, Dec. 27, One Barrel will take over four of the Cherry Lanes tap beer lines offering patrons a chance to taste a selection of One Barrel’s craft beers. The eight tap lines at Cherry Lanes  are dedicated to Wisconsin beer and found an instant match with One Barrel and their vision of quality beer in a laid back Wisconsin tavern vibe.

The tap takeover includes prize giveaways. Every One Barrel beer purchased comes with an entry to win prizes given away each hour from 5-9 pm.  Meet the owner of Door County’s newest brewery, Peter Gentry of One Barrel Brewing.

One Barrel’s tap take over beers include: Commuter Kolsch, Hypercolor NE IPA, Fanny Pack IPA, and Trinity Belgian Tripel. Cherry Lanes is also offering coupon give aways and other specials throughout the night. Cherry Lanes will be open until 2 am.