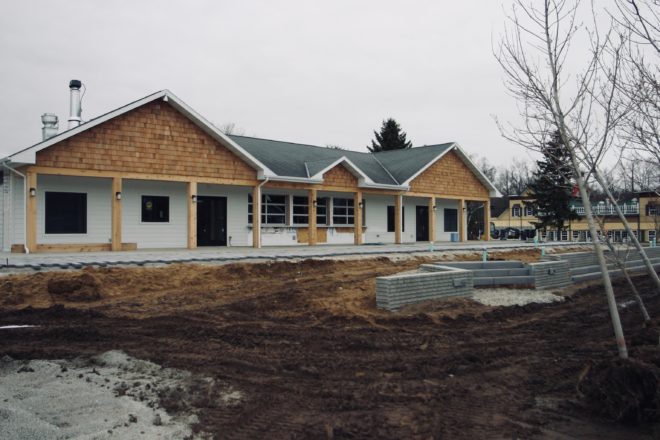 Soggy weather has prevented the landscape crew from cutting sod, but the two-tier patio is taking shape outside One Barrel Brewing in Egg Harbor. Photo by Jim Lundstrom.

The grand opening of One Barrel Brewing’s Egg Harbor taproom is set for Memorial Day weekend, beginning May 23.

“They assure me they will be done on time,” said One Barrel owner Peter Gentry about the construction and landscape crews that are converting the former retail space into an inviting taproom. “They’re not cutting sod right now, which might be an issue.”

Outside will be a two-tiered patio with fire pits, limestone boulder walls and German beer-hall tables.

“The big patio is the best sign anybody can have along the road. It’s a fun, outdoor space people can see when they drive by,” Gentry said.

Inside will be a 90-seat bar that Gentry describes as an “open, bright, airy, happy” space. Wild Tomato Pizza will also be inside, offering cooked-to-order pizzas in its 700-degree wood-fired oven.

“Wild Tomato will be cutting it close also,” Gentry said. “Their pizza oven is in. They have some painting, drywalling and electric work to finish up.”

In addition to the Madison-based brewery preparing to open its Door County taproom – its second – Gentry and his wife, Jennifer, have been hiring staff for the opening.

“We are augmenting staff with my wife, myself and two or three of our Madison staff,” he said. “We’ve hired 10 other people and could stand to hire two to three more.”

“We may even have a cherry Kolsch we released in Madison. It’s been pretty popular,” Gentry said. “Then we’ll have one line that is a constant rotation. We are not brewing here until August, so we’ll be bringing some of our one-barrel stuff here.”

One Barrel opened its first tap room in the Schenk’s Corners neighborhood on Madison’s east side in 2012. Since then, it has become the 13th-largest craft brewery in the state, producing 5,100 barrels of beer and cider in 2018 (that’s more than 1.5 million beers) and selling its products statewide.

There is also a planned soft opening May 16-18, but Gentry wants people to know the staff may be working through kinks that weekend.

“We’re steering everyone to the 23rd for a better customer experience,” he said.