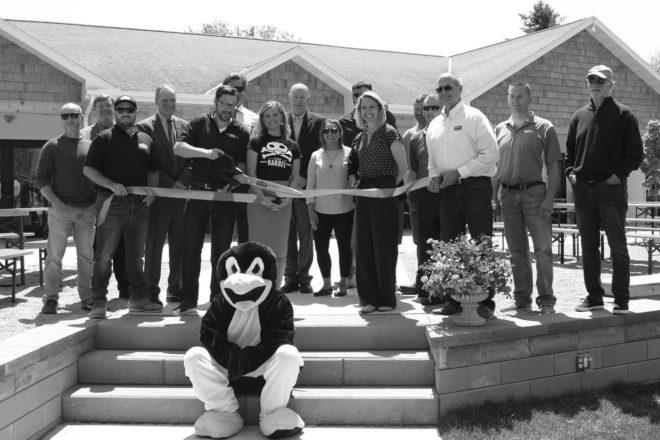 Cutting of the ribbon. Photo by Jim Lundstrom.

How dedicated is the staff at the new One Barrel Brewing in Egg Harbor? General manager Adam Ginsberg was willing to don what looked to be a thick and potentially sweltering penguin costume under the hot sun to pose for photos during the brewery’s ribbon-cutting ceremony on June 4.

“He’ll do anything that’s needed, which is a great, great thing to have within a business,” said appreciative brewery owner Peter Gentry during his remarks at the ceremony.

“There’s a lot that goes into this,” Gentry acknowledged, saying the process – from concept to ribbon-cutting – took 18 months.

Village Administrator Ryan Heise welcomed the Gentrys and Britt Unkefer of Wild Tomato to the village.

“Selfishly, it covers two of the major food groups – beer and pizza of the highest quality,” he said.

More than that, Heise said the new business is a perfect complement to the village’s comprehensive plan and that it was easy for the village to lend support because village leaders are “making decisions from a place of confidence and authority.”

He read from a letter of support that the village sent to WEDC in seeking a Community Development Investment Grant to help the brewery develop its plan, stating that the project fit all the village goals of repurposing an existing building for a new business in the heart of the village, with outdoor space that fits into the village’s desire to create a sense of place.

Dave Phillips, project executive with Bayland Buildings, said the company was proud to have been selected as the general contractor for the project, and he pointed out that in his previous job with Portside Builders, he designed the original building the Gentrys bought for renovation.

Phillips thanked all the contractors who were involved, and he offered Gentry’s father, Jim, a job, describing him as an incredible carpenter and finishman who built the bar inside the brewery.

Mark Hogan, secretary and CEO of WEDC, said the growth of One Barrel in Door County is just another example of the long history of entrepreneurial spirit in Wisconsin.

“All you have to do is look to the significant growth of the microbrewing industry to know the entrepreneurial spirit is alive and well in Wisconsin,” Hogan said, adding that the growth of craft brewing in the state plays to “customers looking for a truly unique experience in how and where to spend their money.”

He said the state is considering celebrating that growth by naming a Microbrewery Day.

Hogan said the $189,600 Community Investment Development Grant that One Barrel received shows how the state can work with regional and local development to help create a better quality of life, saying that 120 of those grants have been awarded since the program’s inception in 2013, totaling almost $24 million for projects that are expected to generate more than $480 million in capital investment.

Gentry said he also fulfilled a lifelong ambition with the presentation of a giant novelty check representing the $80,000 grant provided by DCEDC in order for him to overcome the final hurdle to completing his building