The Village of Egg Harbor will take another crack at approving a plan for its marina when it invites voters to the polls again for a referendum July 28. 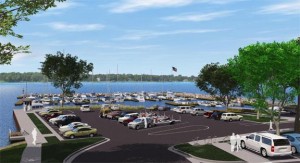 A computer imaging rendering of the design for a new Egg Harbor Marina.

The village board hopes a couple of modifications to the plan it took to voters in May will be enough to change a handful of minds – assuming the village holds on to its YES votes.

In the plan’s latest evolution, the rubble breakwall is lowered by 2.5 feet, to 7.5 feet above International Great Lakes Datum. That’s about 1.5 feet higher than the existing pier. Many opponents of the last plan said the breakwall height was a major problem, since it would impede the view of the horizon for pedestrians and neighboring property owners.

By bringing the breakwall down, the village is able to lower the project cap from $6.6 million to $6.5 million. The Wisconsin Department of Natural Resources said the change would not affect previously approved permits, and the Wisconsin Waterways Commission said the $1.185 million grant it awarded to help pay for the project is still in effect. 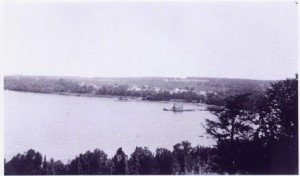 The Village of Egg Harbor as it appeared circa 1920s.

That grant brings the total price tag of the new marina down to about $5.3 million. Interest owed on borrowing for the plan will bring the final price tag to about $9.4 million. Assuming the village does not receive further grants, the owner of a $250,000 home will see her property taxes rise $130 per year if the referendum passes.

Steve Schaefer is president of the Peninsula Shores Condominium Association, located directly south of the marina. He and Bob Doneff led a June effort to design a medium-sized marina that would have had nearly the same price tag, but fewer slips and a smaller footprint. The village board roundly rejected that plan, but they made alterations in an attempt to appease opponents.

Schaefer said he remains undecided about the referendum.

“It’s pretty clear the voters want a marina, the issue is the number of slips and the cost,” he said.

He questioned whether the village could even build a marina in time for next year’s boating season, and if it can’t, should they continue to work toward a better consensus plan.

“You wonder whether, if we had more time, something better would come forward,” he asked. “But then, some people are ready to move on. It’s become an extremely divisive issue.”

Those in support of the plan say three years of deliberations is plenty. 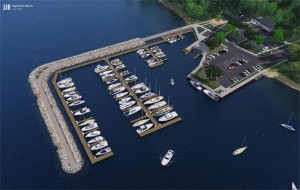 There’s little question the new marina design would be a great aesthetic improvement over the existing facility, built in 1974 and crumbling from the inside.

The substructure of the pier is collapsing, and the effects can be seen by the casual observer, as a section near the center of the pier has sunk significantly.

Harbormaster Steve Smith said now “is a great window to get this done at a good price.”

“A lot people think the village has been inflexible, but the evidence would say that that is not true,” he said. “They’ve continually made modifications in size, detail, and price, including the latest lowering of the breakwall. And remember, a lot of the design was insisted upon by the DNR and couldn’t be changed.”

Smith said the notion that the new marina is a rich boaters’ playground isn’t valid. 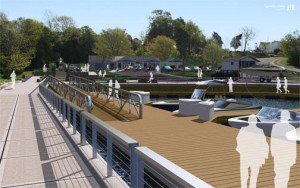 “There are more slips for small fishing boats than before,” he said. “And we’ve added a lot of aesthetics and amenities for non-boaters to enjoy that have never been there.”

The question is whether the village can support the tax burden, especially with reassessments due in about a month that many expect to raise property taxes significantly. Two years ago, the village purchased a property to expand the public beach at a cost of $1.6 million and has taken on several enhancement projects. If the marina is approved, voters will experience another 6 percent rise in the local property tax rate.

• Finger piers will stay in all year, saving maintenance costs

• More green space, including storm water catch basins with grass and trees between the parking lot and the water

• Aesthetic improvements to the breakwall, including seating areas and benches

• Maintains fishing opportunities on the breakwall and finger piers

• Qualifies as harbor of refuge

• Cost: $6.5 million, with $1.185 million covered by a grant from the Wisconsin Waterways Commission. Total borrowing by the village for the project is $5.3 million, plus interest (about $3.8 million).