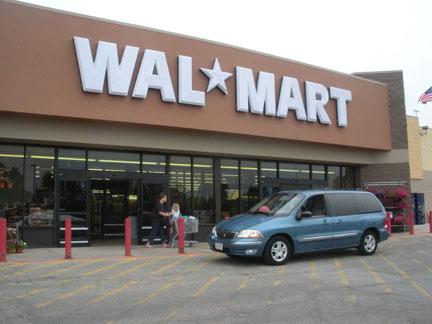 Wal-Mart aims to build a Supercenter where its present store stands.

One of the issues Wal-Mart will deal with in its dispute with Nash Finch, the food distributor that threw the Supercenter proposal for a loop a couple weeks ago, is parking.

Not that I want to make it easier for multi-national retailers and restaurants to move in and compete with my friends and neighbors, but when I look at the big box stores of any brand, I wonder where we come up with our ridiculous parking requirements. Stop by Wal-Mart, Econo, Target, Dunhams, or any business outside a downtown corridor, and you’ll see a sprawling, mostly empty desert of pavement in front of it. Rarely are these lots even half full, and maybe (MAYBE) they’re more full around the holidays.

Where does this parking mandate get us? It costs businesses money, it creates a lot more impervious surfaces and stormwater runoff, and it’s ugly. A waste of land and resources.

We ought to change our ordinances to encourage shared parking – Wal-Mart and Econo could probably use at least 20 percent less parking between them most of the year. And consider that right next door to these two behemoths are the huge, usually empty lots of the Cherry Point Mall, Autozone, Apple Valley Lanes, and The Nightingale (admittedly packed in the evenings, but empty during the day). Planning for shared use would have allowed for shrinking the Econo and Wal-Mart lots, knowing that those four other parking lots could have more than accommodated the overflow on the handful of days when it would be needed.

The same idea holds true for the Sturgeon Bay Cinema, with its massive parking lot built next door to the massive, empty Kmart lot and half-full Pick N’ Save lot.

As our resources get increasingly scarce, and planning for an auto-centric world seems so outdated, isn’t it time we discard our once unquestioned ideas that we now realize simply mar the landscape and harm the environment for little purpose?