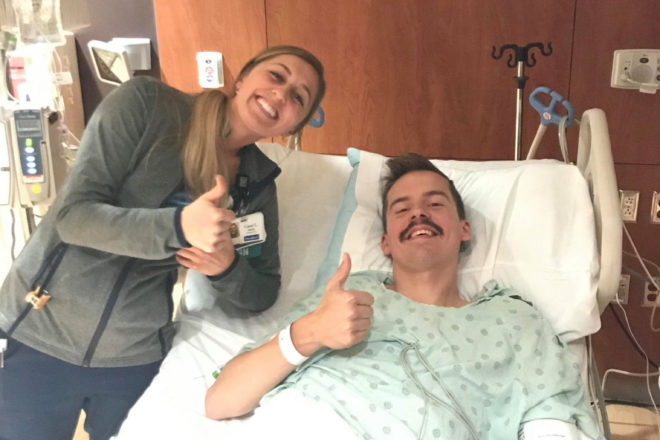 There are small ways to be a hero: giving blood, donating stem cells, helping children with special needs, encouraging others to do their part.

Then there’s what Ben Anderson did on Dec. 5: The 24-year-old Sister Bay native underwent anesthesia for 11 hours to give a portion of his liver to a three-year-old Wisconsin boy, becoming just the third person ever to make a live liver donation at Milwaukee’s Froedtert Hospital.

The surgery was a success. The young boy’s body accepted the liver, and his family has received the greatest gift of any holiday, past or future.

“Everything I’m going through is a temporary setback,” Anderson said. “A little three-year-old boy is going to have a chance at a life.”

A live liver donation surgery is rare, with only 15 to 25 percent of the population being eligible to donate. Interested donors go through an extensive screening process before they can be matched with a recipient.

“It’s difficult to find a match,” said Cami Loritz, a transplant nurse at Froedtert Hospital. “There’s no genetics involved in it, actually.”

An “altruistic donation” – in which the donor doesn’t know the recipient – is based on blood type and the right height and weight. Generally donors must be in good physical and mental health.

They must have an MRI scan, CT scans, X-rays, blood work and a psychological evaluation. The vasculature anatomy (the arrangement of blood vessels in the body) must also match with the recipient.

A 30 percent portion of the donor’s liver is then removed to completely replace the liver of the recipient. This surgery is possible because the liver is the only organ in the body with the ability to regrow.

The risks associated with the surgery are similar to those of other surgeries, Loritz said. The risks particular to the liver are likely to be postoperative complications such as developing a hernia, bleeding, or ileus: the temporary inability of the intestine to contract normally and move waste out of the body.

The hospital stay is only the beginning of the recovery process. Anderson remained in the hospital for 10 days, but his liver – 90 percent of it – won’t grow back for another four to six months. After a year, the last 10 percent of growth will occur and complete functionality will return. Donors are also on a 10-pound lifting restriction for eight weeks and are strongly encouraged not to drink alcohol or get pregnant for a year.

The recipient’s recovery period is even longer. It depends on how long and how sick the recipient was, but she or he has more follow-ups and trips to the operating room. To manage potential rejection, recipients are put on anti-rejection medications for the rest of their lives.

Anderson was inspired by a couple of heroes of his own.

In Little League, Anderson got to know a teammate named Bo Johnson who was five years younger. Years later, when Anderson was in high school, Bo and his mother, Annika, loved to watch Anderson and his teammates play. Annika Johnson recalled watching Anderson play basketball and how he was always quick to lend a hand to opposing players if they fell down.

When Bo Johnson was 13, he was diagnosed with extramedullary acute myeloid leukemia, also known as EM AML. After a very public battle that touched the lives of many in Door County and beyond, Bo died in September of 2012. During his final days, he gave a speech to his classmates at Gibraltar, encouraging them to love one another and help those in need if possible. The powerful message remained with Anderson.

“A lot of the origin comes from Bo,” Anderson said. “[His message] stuck with me. It was very important to me.”

Anderson has donated blood to the Red Cross more than a dozen times, set up Be the Match booths to promote donating bone marrow with the Go Bo! Foundation, and donated stem cells in 2015 to save the life of a 58-year-old Canadian man who had the same form of leukemia that Bo Johnson had.

“He’s got a plus-two on his life count there,” said Chris Anderson, Ben’s younger brother. “He’s saved two lives, which is incredible.”

Ben Anderson stays in touch with Annika Johnson through Facebook Messenger. On Nov. 10, he shared with her his intentions to donate part of his liver, which brought her to tears. She’s continually moved by Anderson’s generosity and his efforts to pay it forward in memory of her son.

She read another of his messages aloud, wiping away a steady flow of tears: “Hey, Annika, thinking of you and Bo today. Bo’s message is still being carried on today throughout the world. You should be proud of what a leader Bo was in his short life. I will never forget to pay it forward and have each other’s back. Today’s like everyday: Bo is looking down on all of us. I hope all is going well with you. Sending big hugs and love.” Johnson said, “He always sends me messages like that.”

Anderson has encouraged other people to donate, too, including his brother Chris and cousin Joe Lundquist, who have both donated stem cells after joining Be the Match.

Nurse Cami Loritz also played a significant role in Anderson’s decision to donate: She had donated a portion of her liver to a young child, and Anderson had read an article about her.

He had tried donating earlier to a five-month-old baby, but he wasn’t the right size or weight. Reading Loritz’s story encouraged him to sign up again on Aug. 7, 2019.

That time, he had a match.

But what are the chances that the nurse who helped to inspire his donation would end up being the one to care for him? That’s easy.

“I 100 percent called dibs on him when I saw that we had a living donor,” Loritz said.

Her reason for donating was similar to Anderson’s: In the grand scheme, the pain was a small price to pay compared to what the donation was able to do for another person, she said.

“I knew what he was feeling,” Loritz said. “I kept telling him he didn’t need to be a tough guy. He could use the pain meds that we were giving him. He handled it really well.”

Her own recovery process was slow – more exhausting than anything, she said. She experienced intense fatigue for three months and was unable to work for 12 weeks.

Loritz took care of Anderson during the first two nights after the operation, then checked on him throughout the week. The first night’s priority was pain management, and night two had Anderson on his feet already.

Caring for Anderson was “extremely fun” for Loritz. His easy-going personality and go-with-the-flow attitude was apparent even while recovering from a major operation.

Though nervous, Anderson’s family wasn’t surprised by his decision to donate. Chris, who’s only a year younger, knows better than anyone the kind of leader and example that his brother is – not only for him, but for strangers, too.

“He doesn’t wait for someone to ask for help,” Chris said. “He just goes out and does it. It’s just who he is.”

Anderson’s mother, Tammy Jo, was scared when Ben first told her about his plans, but she calmed down after meeting with the staff at Froedtert. She said she hoped they could use even more of his liver to split up for another child.

“We are very blessed,” she said. “God has used Ben many times, and this is another time He’s using him.”

It didn’t hit Chris until the morning of the surgery that something could go wrong. He began to ask what-if questions about the outcome, and he panicked. But the moment was gone almost as soon as it had appeared.

“Even if something did happen, he’s doing this out of love,” Chris said.  “There’s so much good energy going into this [that] there’s no way that something like that could happen to him.”

There are many ways – and no way at all – to sum up the character of Ben Anderson.

Coaches have said that Ben and Chris Anderson were some of the nicest young men they’ve coached. Steve Grutzmacher used to coach them in Little League, and he said that although the other players would call him Coach Steve, the Anderson brothers would always and only call him Mr. Grutzmacher.

Anderson worked at Wickman House for four seasons and at Taco Cerveza for two, jumping into any task or role that came his way, owner Mike Holmes said.

One of his favorite memories of Anderson was at Taco Cerveza last summer. While they prepped for the lunch rush, they’d listen to a Spotify playlist that had five or six songs that Anderson really liked. When getting close to opening and lines started forming, Anderson would say, “Uh oh, I think I need the medley,” and go to play those six songs.

“He’s an incredibly intelligent goofball who likes working hard and making others’ lives better,” Holmes said. “That came out in spades while we worked together.”

It’s that combination of being goofy and selfless that makes Anderson’s name a familiar one around the area. Everyone knows who he is, and everyone uses the same words to describe him: “genuine,” “kind,” “hero,” “polite,” “hard-working.”

In addition to volunteering and donating, Ben has offered his friendship and mentorship to students with special needs such as fellow student Reis Smith. Anderson graduated from UW-Whitewater with a degree in early-childhood education and special education.

During the healing process and beyond, Anderson hopes to make an even greater impact by raising awareness as an advocate for live liver donations and for the other programs of which he’s been a part.

“Live liver donation is a viable option,” Anderson said. “Yes, the recovery is long, and yes, there’s pain involved, but for me it’s a no-brainer, and it was a no-brainer. I would do it again tomorrow.”