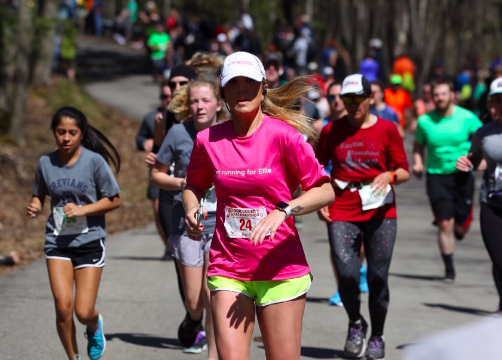 A freak accident had Laurel Ciohon wondering if she’d ever run again. Submitted.

Most of the 750 runners standing at the starting line of the Nicolet Bay 5K race Saturday morning will have similar stories. Some will be recreational runners taking in the beauty of the course in Peninsula State Park. Others will be more serious runners trying to break a personal record. Finally, there will be participants looking forward to the post-race beer tent.

No one could possibly share the story of Ephraim resident Laurel Ciohon. And she said that’s a good thing. Her narrative is about ongoing physical recovery leading to a starting line she has stepped on before.

A freak accident in September 2018 left the avid runner’s body shattered. Ciohon had a French door installed off of her second-floor bedroom and planned to eventually add a patio. She awoke early one morning, and while making her way to the bathroom, tripped over the dog bed sitting in front of the door, which was open to allow cool air to pass through the screen.

Ciohon said she tried to catch herself, but the force of the fall sent her and the screen 15 feet to the ground below her bedroom.

“I tripped, and it made me really scared because I could see where I was falling,” Ciohon said. “I remember reaching for the screen because it was the first thing in front of me. A screen door is not going to stay in place if you fall into it.”

Ciohon collected herself and crawled 30 feet to her car, pulled herself into the passenger seat and called 911 from the touchpad, which had a Bluetooth connection to her cell phone in the house.

A series of X-rays at Door County Medical Center revealed many  injuries: a broken femur, broken hip, shattered left wrist and hand, and broken ribs. Ciohon had surgery soon after and now has two titanium rods holding her hip and femur in place, and a titanium plate in her wrist.

“That was undoubtedly the scariest thing I’ve ever been through in my life,” said Ciohon, who works as the art director at Door Guide Publishing in Sister Bay. “Not knowing if I was ever going to walk again or use my left hand again was scary.”

Four days later, Ciohon was sent home to the care of her family and boyfriend, Chris Janisse. Ciohon said she needed constant help with everything from eating to bathing because she was unable to walk or use her left hand.

“There were some really dark days where I just wanted to give up. I didn’t care,” Ciohon admitted. “My family and my boyfriend, Chris, were a huge part of my recovery, and I wouldn’t have been able to snap back as quickly as I could without their love and support.”

Ciohon did five months of intense physical and occupational therapy to gain muscle strength, learn how to walk again and regain the use of her hand. She said she still sees a mental-health therapist to address the emotional issues related to her fall and recovery. Ciohon added that she works daily on therapist-prescribed strength training for her leg and her hand.

“I still limp when I walk and have lots of difficulty with stairs and lower-body strength,” said Ciohon, who estimates she ran more than 20 miles per week before her accident. “Some days I feel great; others the pain is still unbearable. My left hand and wrist don’t have full motion yet, so I can’t do push-ups or lift anything too heavy yet. I tend to get very discouraged that it’s taking me so long to get back to normal.”

But normal will continue Saturday when Ciohon reaches the starting line on Shore Road and makes her way out to Eagle Bluff Lighthouse, taking in a view of Horseshoe Island and Eagle Bluff before hitting the finish line. Ciohon said she plans to walk and slowly jog the 3.1-mile course.

“I originally signed up to run the half, but that was back in February when I wanted to give myself an impossible goal and wanted to push myself,” Ciohon said. “Although there’s no way I could even walk that far, my new goal is to be able to run the half next year.”

Ciohon will also be running for those who supported her financially during her struggle. Through Run For A Cause, Ciohon has raised $600 for DCMC Community Fund, which offset the cost of her treatment. In return, the race organizers waived her entry fee.

Through a GoFundMe campaign, the Door County community raised nearly $12,000, which helped Ciohon during the four months she was unable to work.

“The DCMC staff was incredible. They did everything they could to help me with a huge percentage of my bills,” Ciohon said. “The local community has been so kind and supportive. I had some very dark days, but the community support gave me the determination and strength to not give up.”

Despite her struggles related to the recovery from her fall, Ciohon was still able to find some good fortune in her experience.

“It’s all still so surreal to me that I went through such a freak accident and that I landed in just a way that my spine, neck and head weren’t injured in any way,” she said. “As of right now, I have no idea why this happened, or why I ended being lucky enough that the outcome wasn’t worse. Someday I’m sure it will be clear to me. For now, I just want to focus on not taking my health and body for granted and love each day the best I can.”